The Architect of the Capitol and the House of Representatives’ curator will be among the witnesses Wednesday to detail their experiences during and in the aftermath of the January 6 insurrection.

The Architect of the CapitolBrett Blanton wrote in prepared testimony that this staff’raced to the roof to reverse the airflows within the building to help clear the air of chemical irritants, like bear repellents and pepper spray.’

Those chemicals contributed to some of the damage found in the eight pieces of artwork in the House collection that curator Farar Elliott will testify about, including a statue of Thomas Jefferson and paintings of James Madison and John Quincy Adams.

The Architect of the Capitol and the House’s curator will testify before a House subcommittee Wednesday about the January 6 insurrection. In pre-written testimony, the curator said eight pieces from the House Collection were damaged 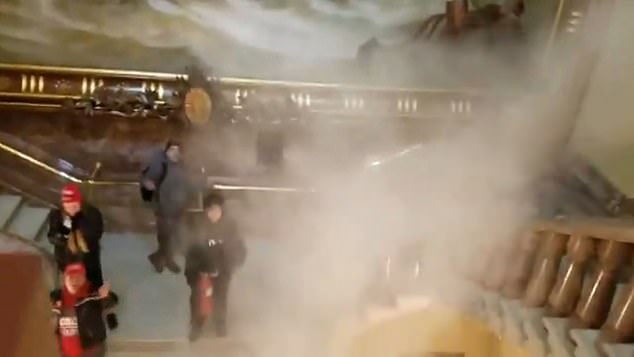 Architect of the CapitolBrett Blanton said that his workers raced up to the roof to reverse the ventilation ‘to help clear the air of chemical irritants, like bear repellents and pepper spray,’ while the curator blamed some damage on fire extinguishers, seen here 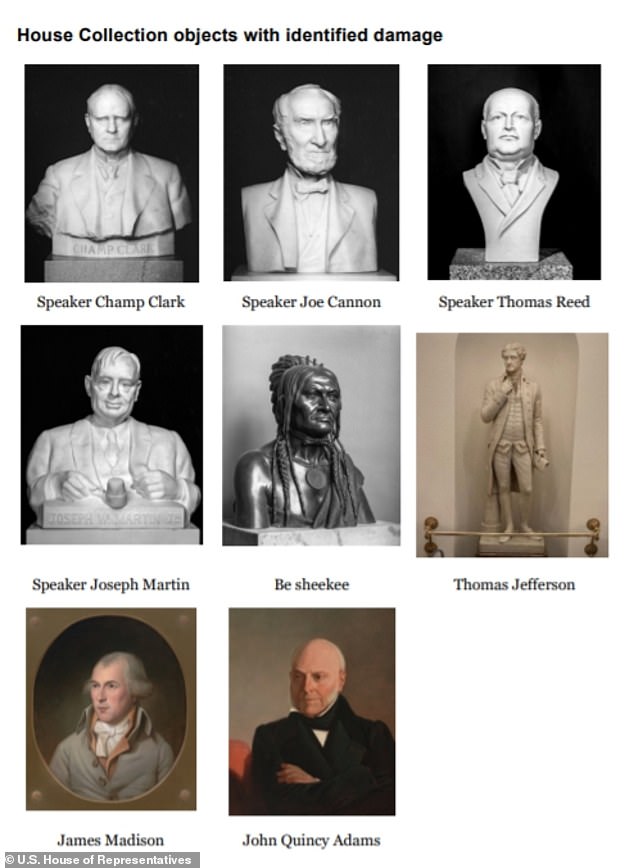 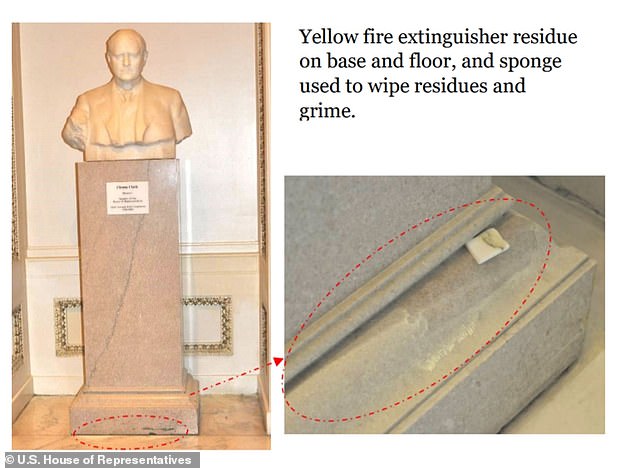 The curator provided lawmakers with examples of the damage in his written testimony, including some of the discoloration on the base of the bust of former Speaker Champ Clark, likely caused by fire extinguishers going off 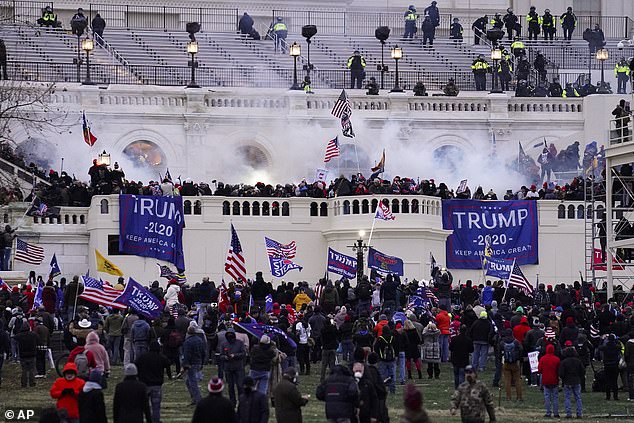 Architect of the CapitolBrett Blanton said his workforce had been outside prior to the riot, painting the inaugural platform that is on the west side of the Capitol Building. Workers were drawn inside as the masses formed

Both witnesses will appear before the House Appropriations subcommittee on the Legislative Branch Wednesday morning at 10 a.m.

On Tuesday, the Senate kicked off its first hearing on the January 6 insurrection.

InBlanton’s written testimony, the Architect of the Capitol said his workforce was busy painting the inaugural stage that day.

‘The day was bright and clear, and our artists were excited to finish painting the stands a bright white with a deep blue edging on the main stage of the platform,’ he wrote.

He said as the MAGA rioters began to appear outside around lunchtime, the AOC staff was moved inside.

‘Over the course of a couple of hours, the hard work of our team was destroyed,’ he recounted. ‘The platform was wrecked, there was broken glass and other debris, sound systems and photography equipment was damaged beyond repair or stolen, two historic Olmsted lanterns were ripped from the ground, and the wet blue paint was tracked all over the historic stone balustrades and Capitol Building hallways.’

The AOC has been working on a restoration project of the Olmstead lanterns, which were originally powered with gas jets.

‘As the crowd began crashing through windows and prying open doors, my staff undertook several amazing actions in support of Congress. AOC employees sheltered congressional staff in their shops to protect them from the roving mob,’ Blanton said.

Other employees rushed up to the roof to reverse the airflows to dissipate the gas.

During Tuesday’s Senate hearing, Capitol Police CaptainCarneysha Mendoza testified that she could smell a ‘military-grade CS gas’ while fighting off rioters in the Capitol rotunda. ‘It was mixed with fire extinguisher spray deployed by rioters,’ she said.

In his written testimony, he praised the efforts of his workforce ‘in the face of this dangerous and stressful event.’

He said that most of the damage to the Capitol, in the areas maintained by the AOC, consisted of ‘broken glass, broken doors and graffiti.’

‘Statues, murals, historic benches and original shutters all suffered varying degrees of damage, primarily from pepper spray accretions and residue from chemical irritants and fire extinguishers,’ Blanton said. ‘This damage to our precious artwork and statues will require expert cleaning and conservation.’

Blanton said that some damaged pieces, like window panes, have been kept in case they’re wanted for a future museum installation about the insurrection.

In his written testimony,Elliott said that during the riot staffers saved several important House artifacts.

A journal clerk secured the House’s silver inkstand, the oldest object in the chamber, which historians believe dates back to 1819.

Additionally, a member of the Sergeant at Arms staff grabbed the mace from the chamber. The mace is a club-like weapon, but in the case of the one in the House, it’s decorative and adorned with a silver eagle and globe at its top. It dates back toDecember 29, 1841. 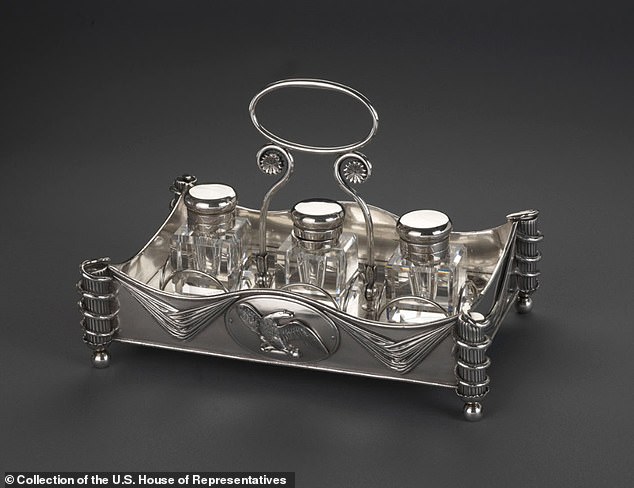 House CuratorFarar Elliott said a journal clerk grabbed the oldest artifact in the House, asilver inkstand, which historians believe dates back to 1819

Additionally, a Sergeant at Arms staffer grabbed the House’s silver mace.The mace is a club-like weapon, but in the case of the one in the House, it’s decorative and adorned with a silver eagle and globe at its top

Later that day, the House Clerk went to the House’s most recently opened exhibition, marking the 150th anniversary of the first African-American representative,Joseph Rainey, and found that the artifacts were OK, Elliott testified.

Overall, Elliott said, eight pieces in the House Collection had potential damage:marble and granite busts of Speakers Joe Cannon, Champ Clark, Joe Martin, and Thomas Brackett Reed, the portraits of Madison and Adams,a bust of Chippewa statesman Be shekee, and the Jefferson statue.

‘These objects are in the corridors adjacent to the House Chamber doors. We noted that they and their frames, plinths, pedestals, and niches were covered in a fine powder, likely residue from a chemical spray,’ Elliott said.

The Clark bust, which is located next to the House Chamber’s west doors, was found to have powder that likely came from a discharged fire extinguisher, Elliott said.

He asked lawmakers for $25,000 to supplement the budget for repairs of damaged pieces in the House Collection.

Blanton said that the Appropriations Committee had approved $30 million to address additional AOC expenses, which includes the controversial fencing around the Capitol, but said in his testimony that the money runs out on March 31.