Ayda Field has delightedly revealed her mother Gwen has received her second coronavirus vaccine, a year on from her cervical cancer diagnosis.

In May, the former X Factor host, 41, revealed that Gwen had been diagnosed with stage two cervical cancer in January,as well as battling Lupus and Parkinson’s Disease, leading to widespread concern that she would contract COVID.

Taking to Instagram, she shared a screengrab of their video call and wrote: ‘My Mom Skyping me to tell me she just received her second vaccination’. 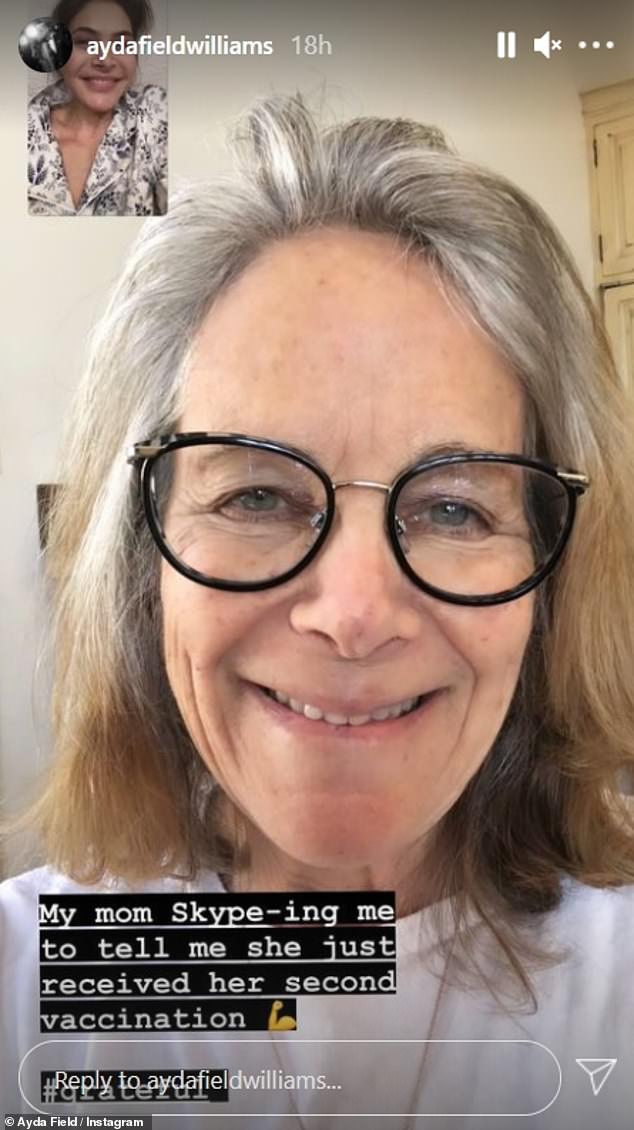 Heartache:Ayda Field delightedly revealed her mother Gwen has received her second coronavirus vaccine, a year on from her cervical cancer diagnosis

Speaking on her At Home with The Williamses podcast last year, Ayda admitted to her fears that her mother could pick up Covid-19 in hospital.

She said: ‘My mum in January was diagnosed with stage two cervical cancer and it had spread outside the cervix and was a very aggressive tumour…

‘When the pandemic hit it was very scary because my mum with Lupus and Parkinson’s and cancer, at 70 years old is prime for some bad things happening so she was going to the hospital every day for these treatments… 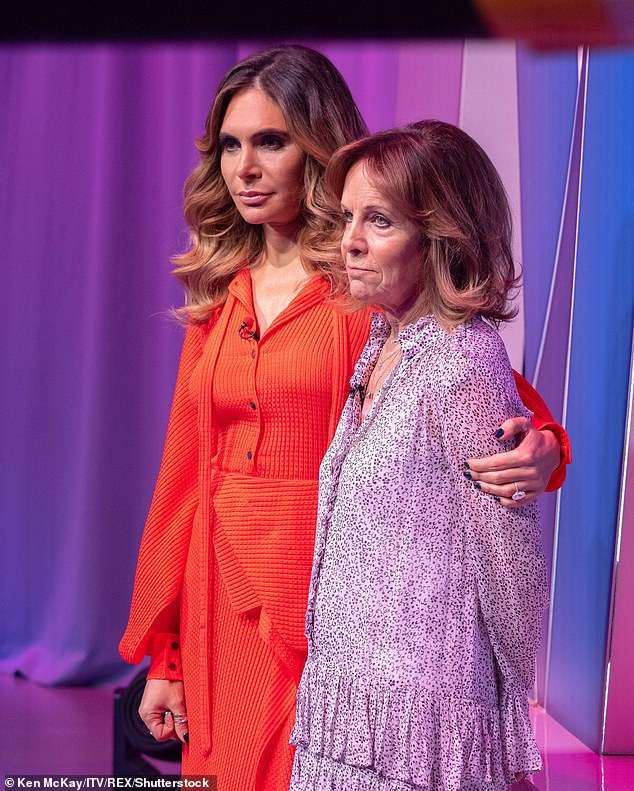 Fears:In May, the former X Factor host, 41, revealed that Gwen had been diagnosed with stage two cervical cancer in January, as well as battling Lupus and Parkinson’s Disease, leading to widespread concern that she would contract COVID

‘I remember thinking “Is she going to pick something up? Is this where it all ends?” ‘

It is a difficult time for Ayda and Robbie, as he recently revealed that his father has Parkinson’s disease and also confirmed Gwen’s ‘big illness’.

Speaking to The Mirror, he said: ‘Weve got a lot of family issues right now. My dad has got Parkinsons, my mother-in-law who I love dearly has got a very big illness…

‘We cant get to them. My dad is thousands of miles away.’ 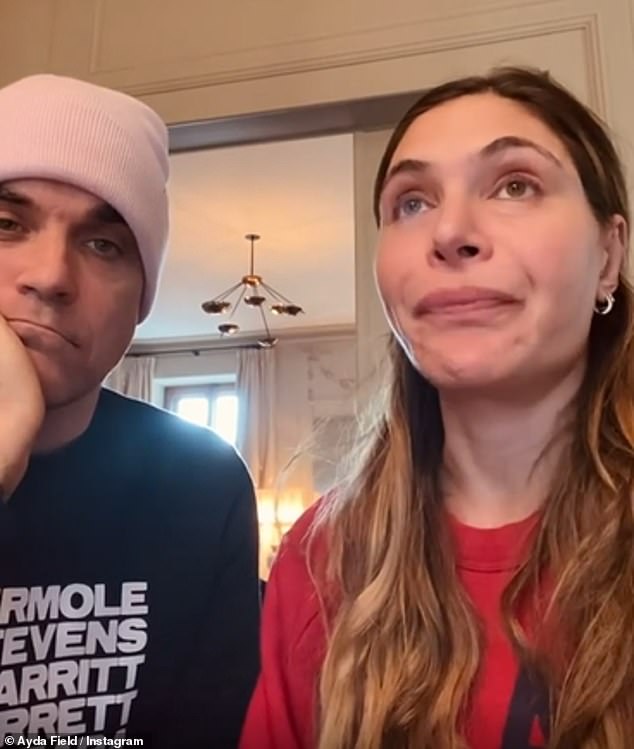 Heartache:It is a difficult time for Ayda and Robbie, as he recently revealed that his father has Parkinson’s disease and also confirmed Gwen’s ‘big illness’

Robbie added: ‘My mum is just a year short of 80 and shes in isolation and I can see the things whirling in her mind and her eyes going.’

The hitmaker said that difficult times cause ‘fear and panic’ and said recent issues made him worry he could suffer from depression and drink and drug problems like in the past.

He said: ‘I noticed at the start of the lockdown that I was going into fear. But the difference between me now and the person I used to be… I saw it, thought “Thats interesting tomorrow will be different”. And it was.’ 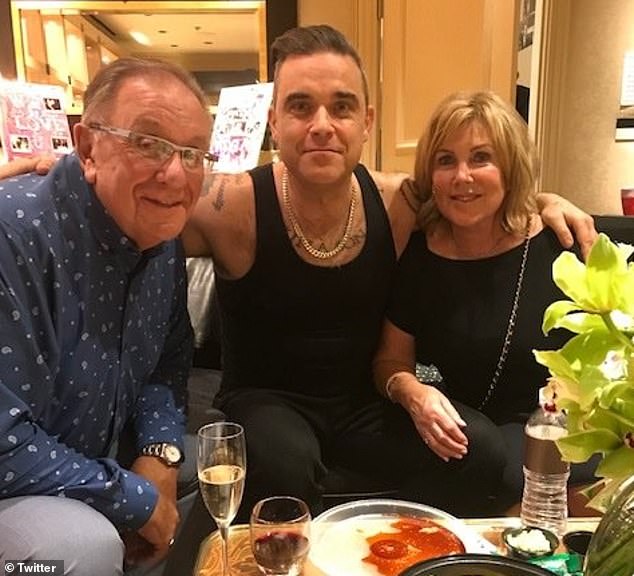 Family: Robbie admitted he is fighting ‘fear and panic’ over his father’s diagnosis (pictured with his father and mother Janet)

WHAT IS PARKINSON’S? THE INCURABLE DISEASE THAT STRUCK BOXER MUHAMMAD ALI

Parkinsons disease affects one in 500 people, including about one million Americans.

It causes muscle stiffness, slowness of movement, tremors, sleep disturbance, chronic fatigue, an impaired quality of life and can lead to severe disability.

It is a progressive neurological condition that destroys cells in the part of the brain that controls movement.

Sufferers are known to have diminished supplies of dopamine because nerve cells that make it have died.

There is currently no cure and no way of stopping the progression of the disease, but hundreds of scientific trials are underway to try and change that.

The disease claimed the life of boxing legend Muhammad Ali in 2016.

Robbie added that in the past, he would think that negative emotions would last for ‘a decade’.

The former Take That star has been joined by his father Pete, who is also a singer, many times on stage.

A source close to Pete told the publication that he is in good health and has sung at all of Robbie’s recent shows, including one in January.

In December,Ayda spoke on her podcast At Home With The Williamses with Robbie where she said: ‘Do you know what? This year has been a f***ing shocker.I know I curse sometimes; I try to not curse.

‘Aside from Beau’s birth, which obviously goes in a ten scale of happiness and joy, this f***ing year has been s***. It’s been awful.

‘It started in January with my mother being diagnosed with cancer, and I thought, “This seems like it’s a s****y start to the year”. Little did I know that a pandemic was going to take over and ruin everyone’s lives as well…’

The X Factor judge continued: ‘Because of this pandemic, I haven’t been able to actually touch her or hold her since February, and I’m now many miles apart from her and I can’t get to her.

‘And yesterday was the first realisation that I’m not going to see my mom for Christmas. I’m going to be miles and miles apart from her for the first time, I think, in my whole life.’

Ayda and Robbie began dating in 2007 before marrying in his home in the Mulholland Estates, Beverly Hills in August 2010.

The happy couple share Theodora, eight, Charlton, five, Colette, two, and seven-month-old Beau, whose arrival was a surprise to fans on Valentine’s Day.

WHAT IS CERVICAL CANCER?

Cervical cancer affects the lining of the lower part of womb.

The most common symptom is unusual bleeding, such as between periods, during sex or after the menopause, but other signs can include: