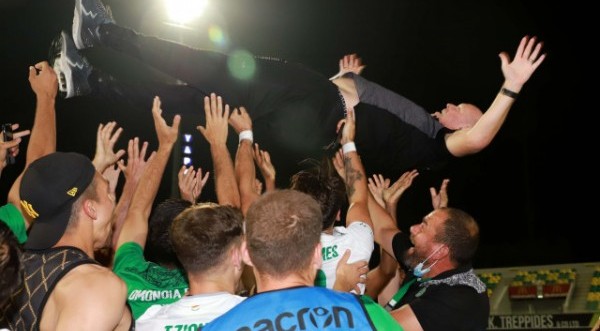 Statements were given by the coach of Omonia, Henning Berg, after the finalization of the conquest of the championship after the victory over AEK with 0-1 in the Arena.

“It’s fantastic. We know how difficult it was to win the championship, especially for us. I am very happy for the players, the administration, the staff and our fans. Thank you all. I know they were expecting it. If you see their reactions before the match, you will see how much that meant “.

“They waited for this for many years and you could see in the faces of fathers, mothers, grandfathers how much they wanted it. I am very happy. Thanks to everyone who joined the effort. “It’s a fantastic year for us.”

To whom he dedicates the championship: “To all those I said before. To all who participated. To the footballers, the staff, the administration, the people who are happy and satisfied. “I am proud to be in this club.”

What he wants to achieve in Omonia: “It is difficult to talk about next year. This success we had this year is not normal. In Europe we played with teams with 10 times bigger budget than us, and in Cyprus there were teams with bigger budgets. “Historically, Omonia had a hard time winning the championships and it is fantastic.”

For the highlight of the year: “It is difficult to choose some moments. I live in the now. A lot has happened this year. For example, our course in the Champions League and the Europa League. When we finished Europe and our course in the championship without defeat. Everything the team showed. The spirit that the team showed was the highlight of the year and together we achieved everything “.