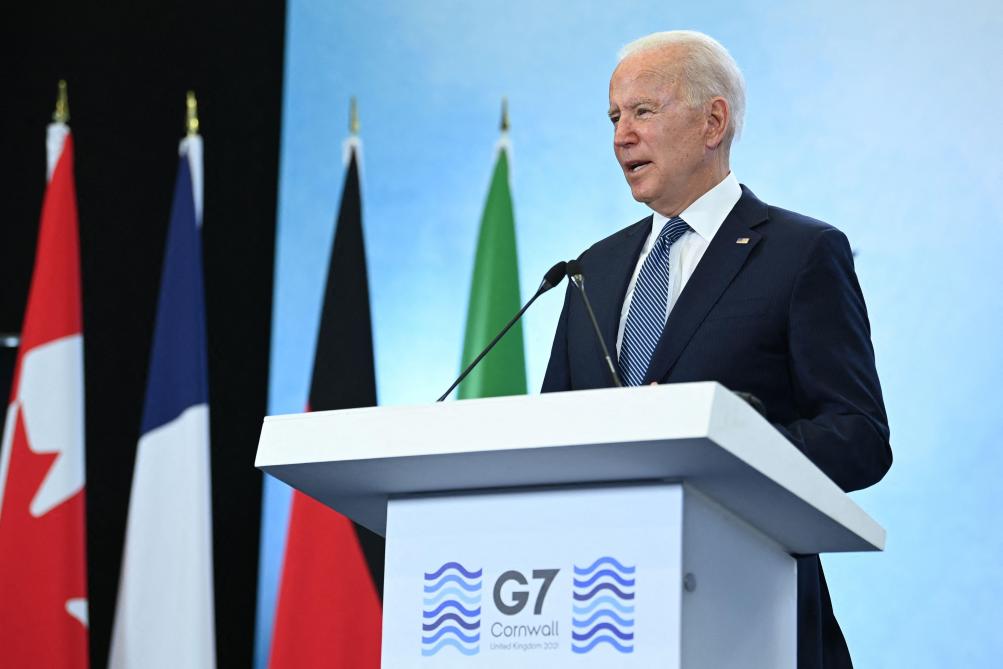 The G7 has made vaccination and the climate its two priorities. He also called for a further investigation by the WHO into the origin of the pandemic to prevent such a scenario from happening again.

Lhe leaders of the great powers of the G7 affirmed their desire to end the Covid-19 pandemic through the distribution of vaccines and to act for the climate, during a summit marked by a new dynamic in favor of Western multilateralism, United States in the lead.

The three-day summit in Cornwall (south-west England), the first in almost two years, marked the return of direct contacts after months of videoconferences for the UK, US, France, the ‘Germany, Italy, Japan and Canada.

At the instigation of Washington, the leaders tried to show a united front on the big files which agitated the planet, starting with the climate and the pandemic, but also Russia and China.

Faced with calls for solidarity which have multiplied in recent months, they agreed to redistribute one billion doses of anti-Covid vaccines by the end of 2022 to make up for the immunization delay in poor countries and promote a more rapid recovery. egalitarian.

“The leaders are committed for more than a billion doses” by financing them or via the Covax sharing device, welcomed the British Prime Minister Boris Johnson, which brings to two billion the total commitments since the beginning of the health crisis.

This is far too little, have deplored many actors, from NGOs to the World Health Organization (WHO): at least 11 billion doses are needed to end the pandemic.

G7 leaders also set out a battle plan with the hope that the world will be ready in less than 100 days to deal with a new pandemic and called for a further investigation by the WHO into the origin of the virus in China. to find out if it could have come from a laboratory accident. This investigation must be “transparent” and “led by experts”, underlined the leaders of the G7 in the final communiqué published at the conclusion of the summit, the first to be held in person in nearly two years.

Another major component: the climate emergency, with an action plan to try to limit global warming. The stakes are high for the United Kingdom, which wanted to lay the foundations for a consensus a few months before the major UN climate conference (COP26) which it will host in Glasgow (Scotland) in November.

The aim is to limit the increase in temperatures below 1.5ºC compared to the pre-industrial era, a threshold beyond which scientists believe that climate change will get out of hand.

To achieve this, the G7 leaders have called for a reduction of about half of their greenhouse gas emissions by 2030, a target that some countries intend to exceed.

They want to turn their backs on power plants fueled by coal, the most polluting fossil fuel, unless environmental compensation measures are in place, such as CO2 capture. Public aid will be stopped this year.

In this context, the leaders plan to sign a check for up to $ 2 billion to support the green transition in disadvantaged countries.

G7 contributions will be increased in order to meet the objective of developed countries to finance climate policies of poor countries to the tune of $ 100 billion per year by 2025.

For environmental activists, it is too soft or too vague. Greenpeace denounced heated “old promises” and Extinction Rebellion called the summit a “flop”.

China and Russia in the crosshairs

Diplomacy also had pride of place during the three-day summit, with China and Russia in the sights.

The G7 called on Beijing to “respect human rights” in Xinjiang, where the Uyghur minority lives, and in Hong Kong. He urged Russia to cease “its destabilizing activities”, in particular via cyber attacks, according to the final press release.

Through working sessions and asides, US President Joe Biden has endeavored to unite his allies against Moscow and Beijing, a major objective of his European tour which should mark the “return” of the United States to the United States. international scene after the Trump era. His arrival in power brought “a new impetus” to the work of the G7, welcomed the German chancellor on departure, Angela Merkel.

To counter the Chinese “New Silk Roads”, the G7 has launched a vast infrastructure plan in climate, health, digital technology and the fight against inequalities in order to help poor countries recover from the pandemic . But these announcements are not to the liking of Beijing, which denounced decisions taken by “a small clique of countries”.