Former NFL All Pro Earl Thomas was reportedly hit with a restraining order after he allegedly flew into a drunken rage and punched a glass window while threatening his wife and her family on the morning after Christmas.

Nina Thomas, who was arrested by police in Austin, Texas, last April after she allegedly held him at gunpoint after discovering him naked in a bedroom with other women, described the alleged December 26 incident in court documents.

Earl Thomas, the 31-year-old former Seattle Seahawks and Baltimore Ravens star free safety, has denied the allegations made by his estranged wife, who filed for divorce this past November, according to TMZ.

Nina also alleges that Earl sent explicit videos of him and his wife being intimate to a group text that included her parents and their nanny. He also circulated similar videos of himself and another woman as a way of embarrassing Nina, it is alleged.

DailyMail.com has reached out to Earl Thomas; his agent; Nina Thomas; and her attorney seeking comment. 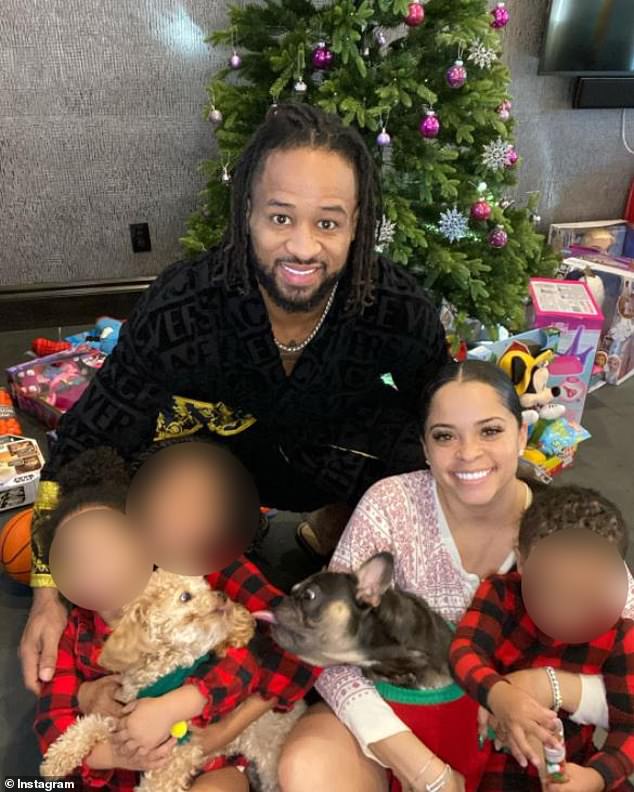 Nina Thomas, the wife of former NFL All Pro Earl Thomas, has reportedly obtained a restraining order against her husband after he allegedly flew into a drunken rage and threatened her the day after Christmas. The image above shows Earl and Nina Thomas spending Christmas together with their three children at the home of Nina’s parents in Orange, Texas 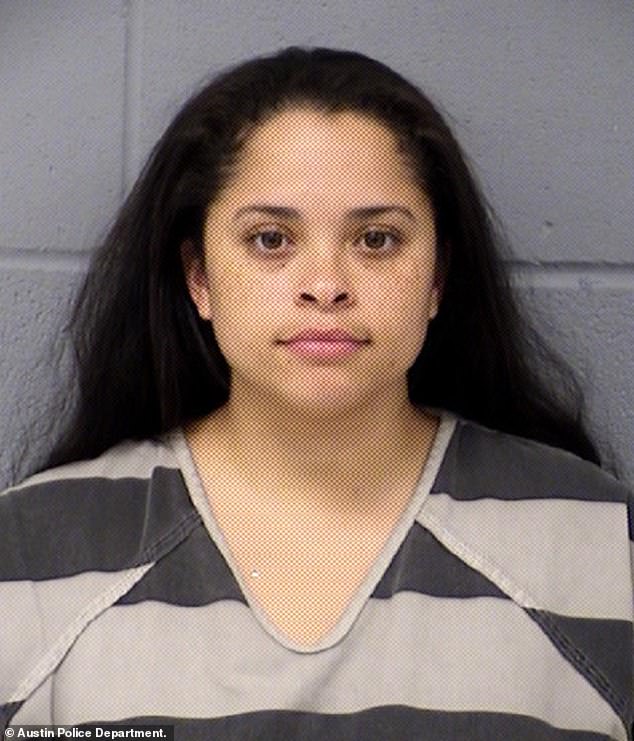 Police in Austin, Texas, arrested Nina Thomas on April 13 after she allegedly pointed a loaded gun at her husband’s head. According to police, Nina caught her husband naked in bed with several other women at an Airbnb 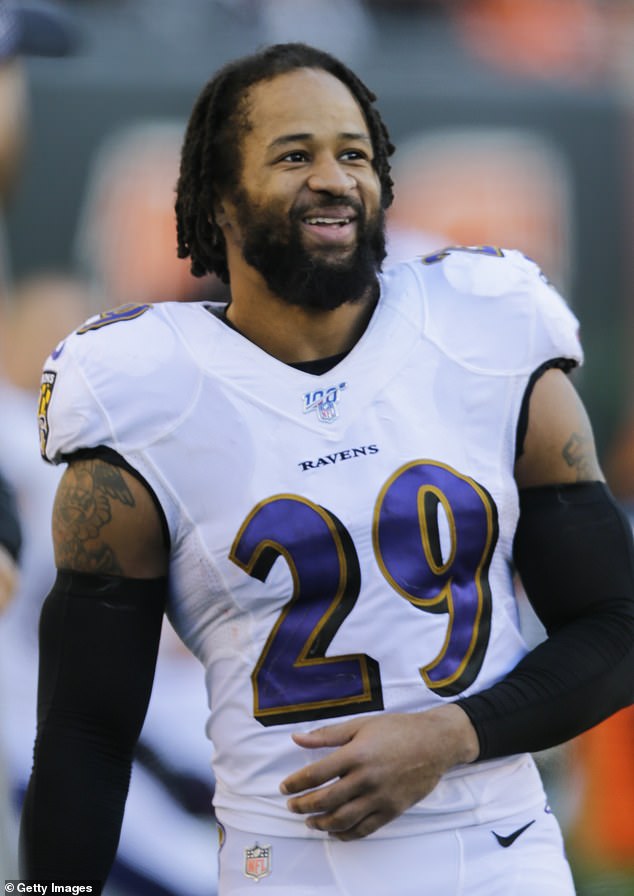 The NFL star previously played nine seasons in Seattle before he signed a four-year, $55million contract with the Baltimore Ravens in 2019. He is seen above with the Ravens during a game against the Cincinnati Bengals in Cincinnati, Ohio, in November 2019

According to court documents, Nina Thomas agreed to spend Christmas with her husband at her parents home in Orange, Texas, so that they could celebrate the holiday together with their three young children.

Nina alleges that Earl chose to stay out all night drinking during the holiday.

When he came home the next morning, Earl, who had been sending harassing text messages to Nina overnight, arrived at the house visibly intoxicated, it is alleged.

According to court papers, Earl told Nina to suck my d*** right in front of their daughter.

When Nina went outside to her car to get something for the children, Earl is alleged to have followed her.

Nina alleges that Earl screamed at her in the front yard. She then locked Earl out of the home, according to court filings.

Earl then lost his temper, Nina alleges, saying that her husband was irate and beating on the windows of the house. 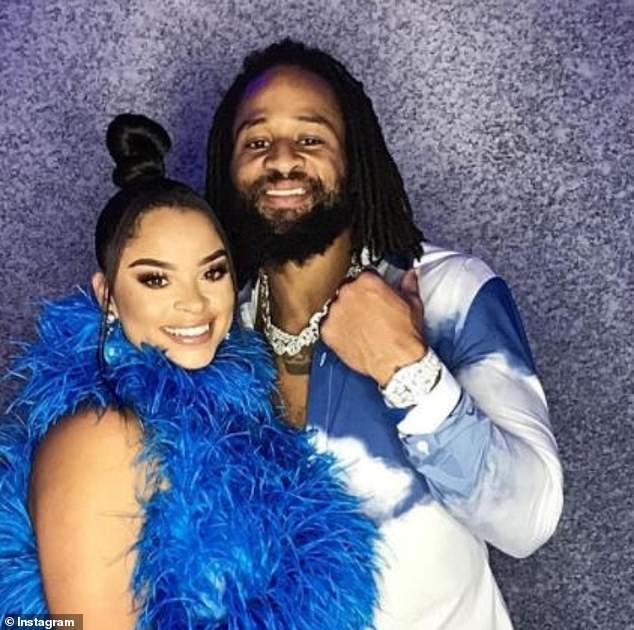 In court papers, Nina alleges that Earl was violent towards her on several occasions this past year.

Nina says in court papers that she called Earls mother in an attempt to get him to calm down, but to no avail.

When Earls mother arrived, her son was still in front of the house screaming obscenities and clearly enraged, it is alleged.

Nina claims Earl punched through one of the houses windows. He was bleeding so profusely that blood spilled onto the front porch, it is alleged.

Police were called to the home. Earl was taken to a hospital, where he was treated for his injuries.

According to TMZ, police questioned Earl at the hospital. There, he told investigators that he put his hand through the window, though Earl reported no crime was committed to cause his injuries.

DailyMail.com has reached out to the Orange, Texas, police department for information on the case.

As of Thursday, the case was filed as inactive.

In court documents, Nina claims Earl later threatened to come back to my parents house, to burn all of my things if I came back to our house in Austin, and to kick my ass.

Nina also alleges that Earl sent an intimate video of him and me in a group text to my parents and to our nanny.

To further torment me, Earl sent me an intimate video of himself and another woman to my phone, Nina alleges in court documents. 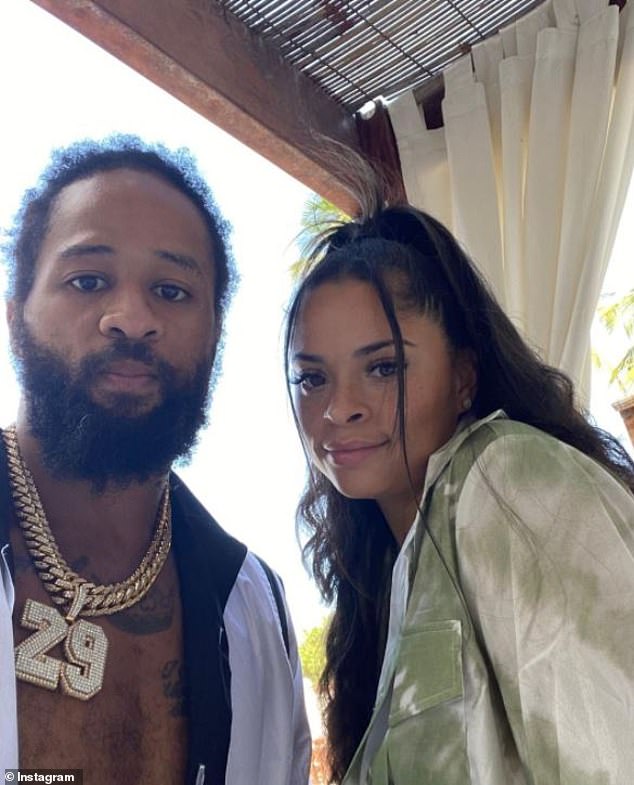 Court papers also recount an incident from October 9, Ninas 31st birthday, in which Nina alleges that Earl flew into a fit of anger and called me a b**** after she left him to meet her girlfriends for brunch. According to court documents, Earl grabbed Nina by the back of her neck and threw food and drinks at her while hurling insults and telling me that I am worthless.That same day, Earl posted a photograph of himself and his wife on Instagram (above) 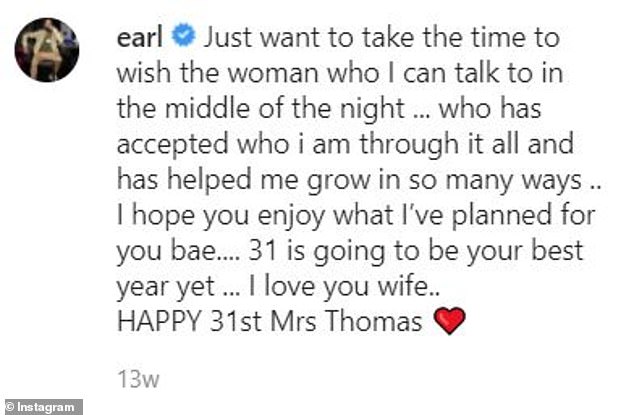 The caption on the post was a love letter to Nina

Nina claims that this was the latest in a string of incidents involving her and her husband.

Court papers cite an alleged incident from June 2020, when she and Earl were visiting the Golden Nugget casino in Lake Charles, Louisiana.

Nina alleges that Earl was acting belligerent at the casino.

In order to avoid a brush with security, Nina says she managed to convince Earl to return to the hotel room with her.

Once there, however, Nina says that Earl decided to direct his anger towards me and started mumbling insults and calling me names.

At one point Earl threw me into the bath tub and turned the hot water on me, Nina states in court papers.

Nina claims that she sustained bruising to my torso and back that required medical attention to ease the pain caused to my back.

Court papers also recount an incident from October 9, Ninas 31st birthday, in which Nina alleges that Earl flew into a fit of anger and called me a b**** after she left him to meet her girlfriends for brunch.

According to court documents, Earl grabbed Nina by the back of her neck and threw food and drinks at her while hurling insults and telling me that I am worthless. 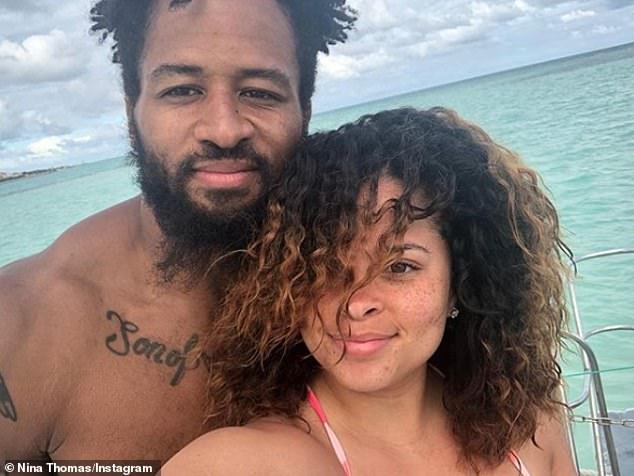 In November, Nina filed for divorce. The couple is seen above in March 2018

Nina says that she has photographs showing the bruises left on her body.

That same day, Earl posted a photograph of himself and his wife on Instagram. The caption on the post was a love letter to Nina.

Earl wrote: Just want to take the time to wish the woman who I can talk to in the middle of the night … who has accepted who i am through it all and has helped me grow in so many ways .. I hope you enjoy what Ive planned for you bae…. 31 is going to be your best year yet … I love you wife..

Nearly two weeks later, Nina claims she and Earl were at a Dallas hotel drinking when Earl started mumbling rude and obscene things to me.

Nina, fearing that things would escalate, started to pack up her things to leave when she claims Earl grabbed me by the pony tail, threw me onto the bed, and he pinned my body down.

Nina says that she managed to extricate herself and flee. Days later, she filed for divorce.

In the divorce papers, Ninacited adultery as grounds for ending the four-year marriage, TMZ Sportsreported. 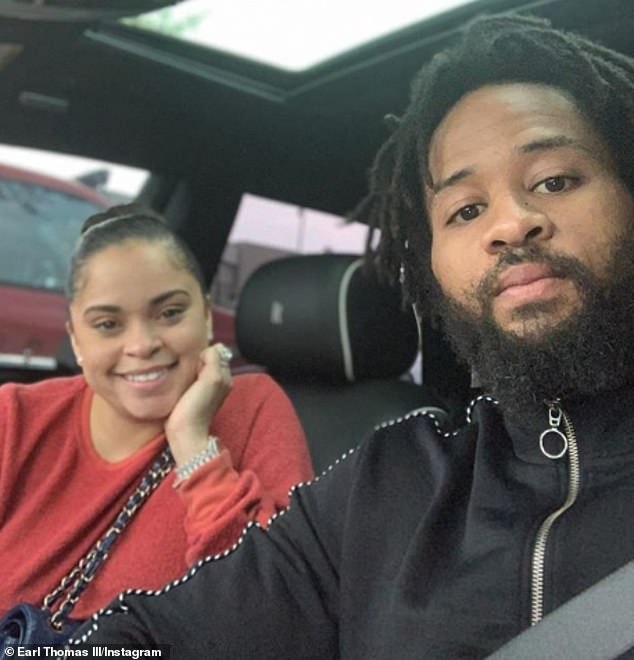 In court papers filed on November 3, Nina cited adultery as grounds for divorce

Ninas petition for divorce describes a relationship with her husband that has deteriorated to the point where theres no reasonable expectation of reconciliation.

She asked the court to grant her primary custody of the couples three children.

Nina also demanded that Earl be given limited access to the kids until he takes a parenting course and can show evidence that he is able to care for the children for an extended period of time.

On April 13, Earl was held at gunpoint by his wife after she discovered him naked in bed with several other women, TMZ reports.

Nina confronted her husband at an Airbnb rental in Austin, Texas, according to police.

An enraged Ninaallegedly pointed a 9mm Berreta at Earl’s head, before he managed to wrestle the weapon away from her.

An onlooker inside the rental home recorded a video of the incident, which is said to show Nina pointing the gun at Earl’s head ‘from less than a foot away and it can clearly be seen that Nina’s finger was on the trigger and the safety is disengaged.’

Earl wrestled the gun away from Nina, before she struck him in the nose.

TMZ reports that Nina ‘also threatened several women at the rental house, pointing the gun at them and yelling ‘I got something for all you h**s!”

One of Nina’s friends was allegedly holding a knife.

Police arrived shortly thereafter and arrested Nina and her two pals. Earl was not taken into custody. 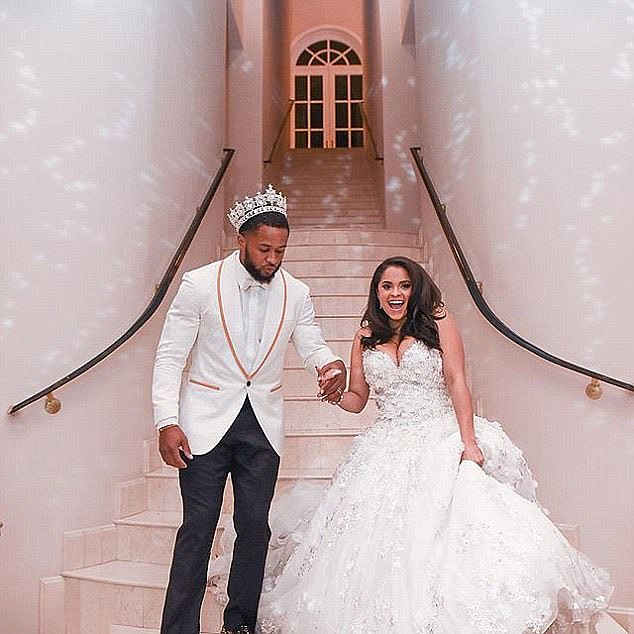 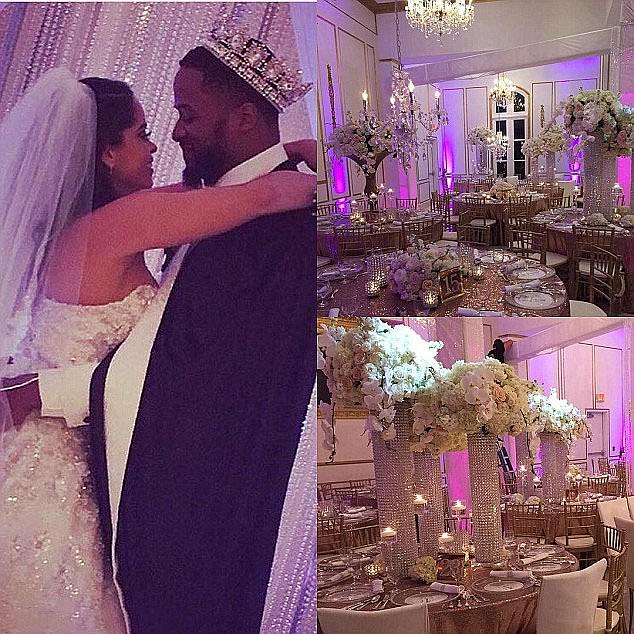 Earl wore a diamond encrusted crown at the nuptials, which were attended by numerous NFL stars

Police were called to the scene, and Nina was arrested for burglary of a residence with intent to commit aggravated assault with a deadly weapon. She was subsequently released from custody after posting $25,000 bond.

‘As her attorney, I am here to declare that my client unequivocally and categorically denies these allegations, and we look forward to our day in court when we can clear her good name,’ Nina’s Houston-based attorney, Jonathan Goins, said.

Nina was scheduled to have a court hearing in September, but the COVID-19 pandemic has created a backlog which has delayed judicial proceedings throughout Travis County, Texas.

I am scared of Earl and believe that there is a clear and present danger, Nina says in court papers asking the judge for a restraining order for fear that both me and the children will be harmed.

The judge granted Ninas request last week, ordering Earl to stay at least 400ft away from the couple’s home in Austin as well as the childrens school.

A virtual court hearing is scheduled for later this month.

Earl and Nina are high school sweethearts who tied the knot in 2016. The couple share three young children.

The NFL star previously played nine seasons in Seattle before he signed a four-year, $55million contract with the Baltimore Ravens in 2019.

Earl and Nina tied the knot in a lavish ceremony back in April 2016 at the Chateau Cocomar in Houston.

The former Texas Longhorns star wore a diamond encrusted crown at the nuptials.

Earl remains unemployed after he was released by the Ravens in August following an altercation in which he punched a teammate during practice.