George Clooney has looked back on his career in a recent BAFTA interview, and insisted that his questionable turn as Batman shaped his future acting work.

George, 59, played the caped crusader in 1997’s Batman & Robin – slammed by critics as one of the ‘worst’ entries in the Batman saga. It was in fact voted the ‘worst film ever’ in 2010 by readers of Empire magazine.

George has described it as ‘painful’ – but believes it changed the way he approaches his craft. 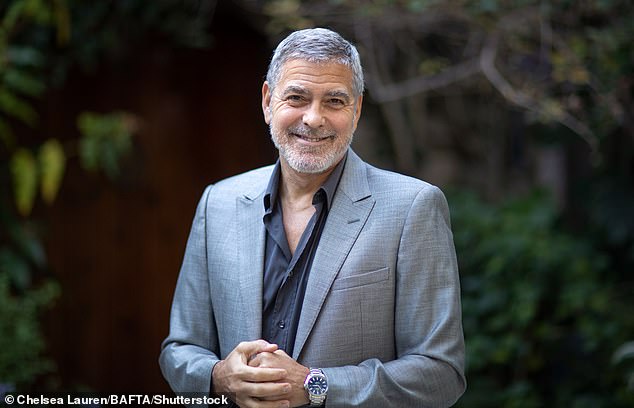 George Clooney has looked back on his career in a recent BAFTA interview, and insisted that his questionable turn as Batman shaped his future acting work.

Chatting about the acclaimed film Out Of Sight, which he starred in after Batman & Robin, George said: ‘It had been a year, Id gotten killed for doing Batman & Robin and I understood for the first time, because quite honestly when I got Batman & Robin I was just an actor getting an acting job and I was excited to play Batman.

‘What I realised after that was that I was going to be held responsible for the movie itself, not just my performance or what I was doing.

‘So I knew I needed to focus on better scripts, the script was the most important thing.

Batman & Robin was written by Akiva Goldsman, directed byJoel Schumacher and co-starred the likes of Alicia Silverstone as Batgirl, Uma Thurman as Poison Ivy and Arnold Schwarzenegger as Mr Freeze.

George has often slammed the film – even advising Ben Affleck, who played the hero in 2016’s Batman v Superman: Dawn of Justice and then a further two films, to steer clear of the role.

His new project is The Midnight Sky, which he has directed as well.

In it, he plays scientist Augustine Lofthouse who is one of Earth’s survivors after an unidentified catastrophe wipes out most of the planet’s population.

Talking about the tole, and his status as one of Hollywood’s heartthrobs, he said: ‘Midnight Sky… I’ve got this long beard and I look really old!’

He also weighed in on the future of cinema – an industry taking a major hit thanks to COVID-19.

‘I know theres this panic about cinemas because theyre not being looked after by our governments, which is a huge industry issue,’ he said. ‘We subsidise oil companies, we could subsidise the movie theatres for a period of time.

Georgerecorded the BAFTA: A Life In Pictures interview virtually in London and joins the likes of Viola Davis, Nicole Kidman, Ridley Scott, Hugh Grant, Quentin Tarantino and Keira Knightley, who have been featured in the past.

Stars of the screen sit down with an interviewer from the Academy and discuss their careers at length, with George’s set to bebroadcast on BAFTA YouTube Channels at midday on Monday 18 Jan. 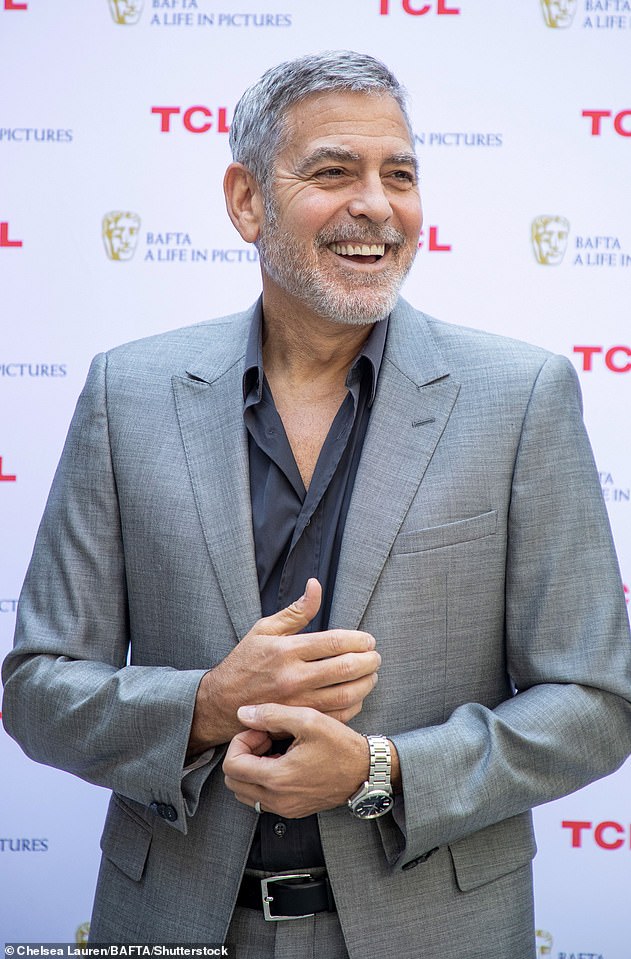 Man of the hour:George Clooney is the latest star to be interviewed for BAFTA’s A Life In Pictures

His latest – The Midnight Sky – is set to become one of Netflix’s most-watched overall films, withDeadlinereporting at the end of 2020 that it had been viewed by a projected 72 million households during its first four weeks of release.

Oscar-winner George also stars in the film – which was also Netflix’s biggest theatrical release of the year, as it played on hundreds of screens in 16 different countries worldwide. 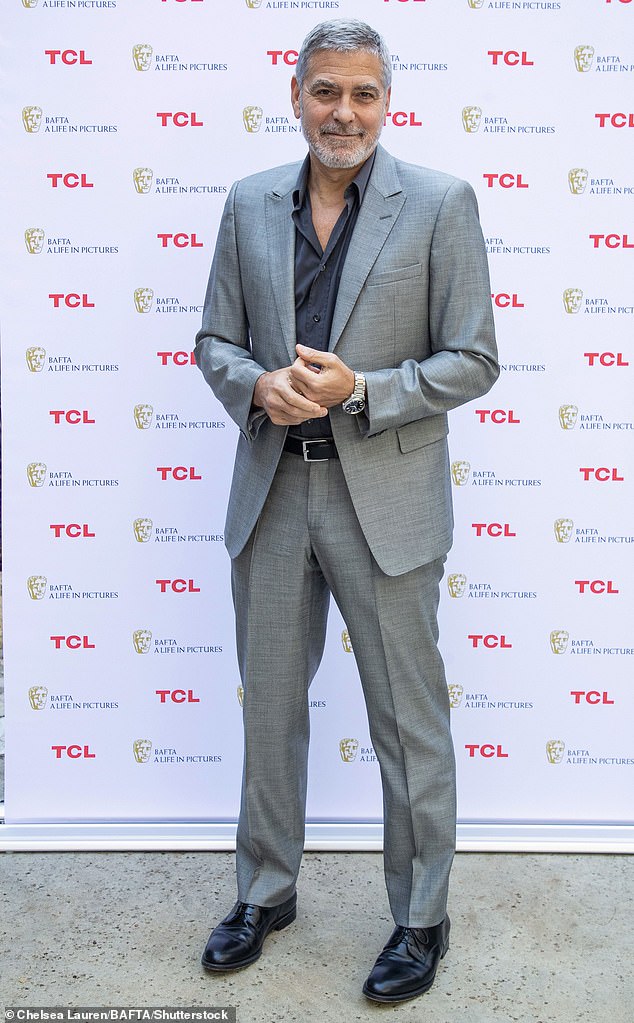 Star: The actor, who turns 60 this spring, recorded the interview virtually in London 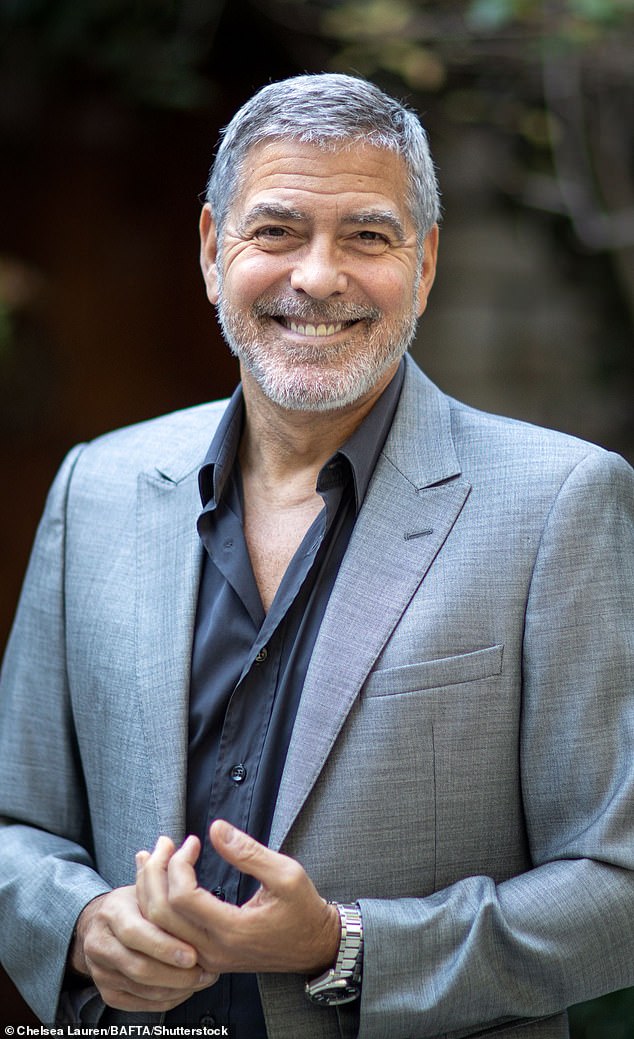 Elite: He joins the likes of Viola Davis, Nicole Kidman, Ridley Scott, Hugh Grant, Quentin Tarantino and Keira Knightley, who have been featured in the past 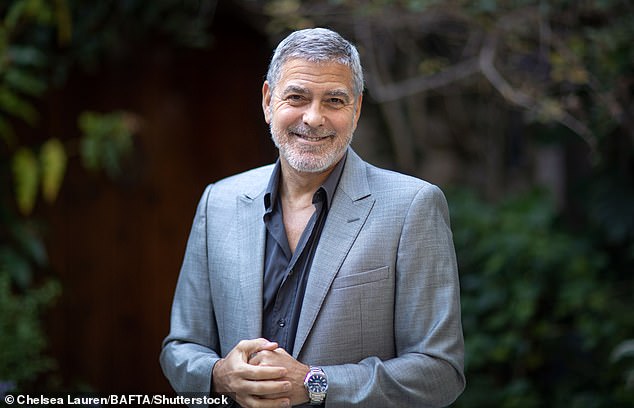 Chat:BAFTA’s A Life In Pictures sees stars of the screen sit down with an interviewer from the Academy and discuss their careers at length 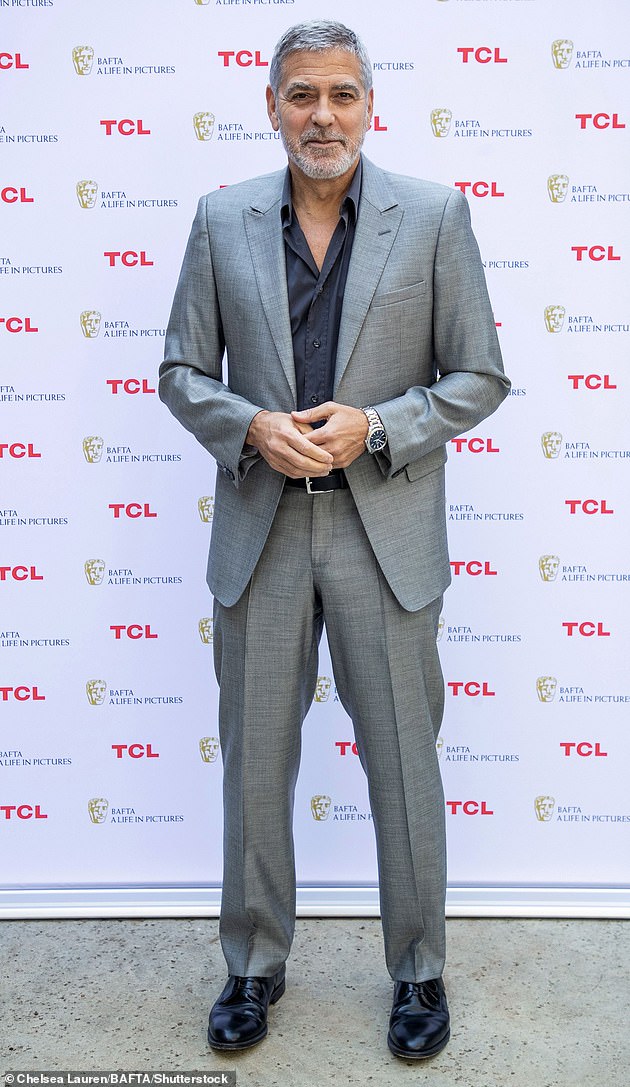 Soon: George’s set to be broadcast on BAFTA YouTube Channels at midday on Monday 18 Jan

In terms of streaming, the media company confirmed that The Midnight Sky attained the top spot for content in 77 countries and has reached the top ten list in 93 countries overall.

The science fiction picture was based off of the 2016 novel of the same name, written by novelist Lily Brooks-Dalton.

The plot follows a research scientist who takes a young girl on a trip through the Arctic Circle in order to warn a potentially returning spaceship not to return to Earth, which has undergone a cataclysmic event. 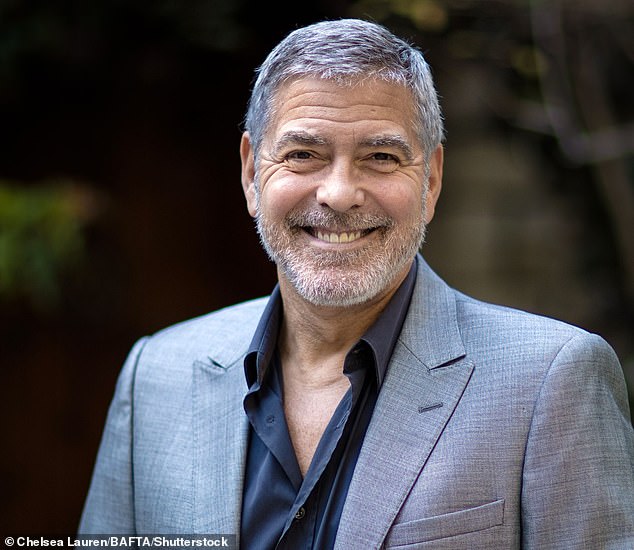 Stalwart: BAFTA’s A Life In Pictures sees stars of the screen sit down with an interviewer from the Academy and discuss their careers

Development on the project was announced in June of 2019 and filming began in October of that year, with production wrapping the following February.

Due to the onset of the coronavirus pandemic, The Midnight Sky was given a limited theatrical release beginning on December 11th. 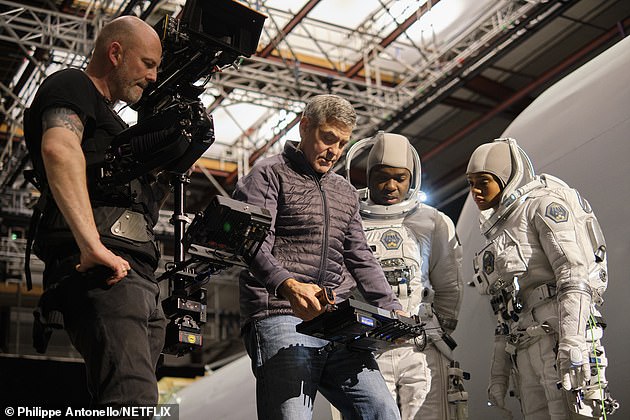 Dual roles: Clooney served as both the leading actor and director of the film; he is seen on set with David Oyelowo and Tiffany Boone in 2019 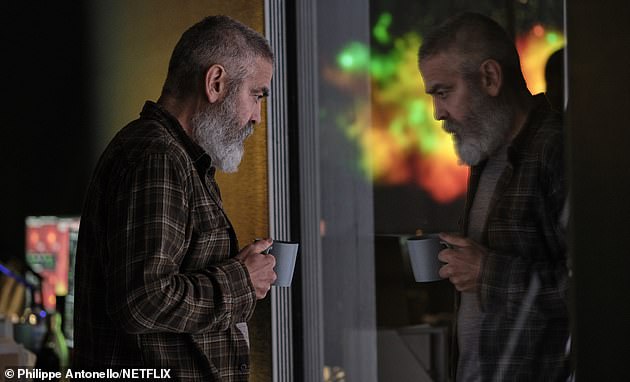 Big and small screens: The Midnight Sky was given separate theatrical and home releases

In an interview with Variety, Clooney spoke about the difficulties of directing a motion picture in a particularly harsh environment; the film was shot in England and Iceland, often in below-zero temperatures.

‘First and foremost, you have to be really, really prepared… We get in a scene, and all of a sudden, its too sunny or too nice. Or then we get there, and it wasnt nice enough. Ive been doing it long enough now that its not as complicated as it feels,’ he stated.

The 59-year-old also noted that he wanted the film to feel timely and to cover a wide range of subjects under the guise of a sci-fi story. 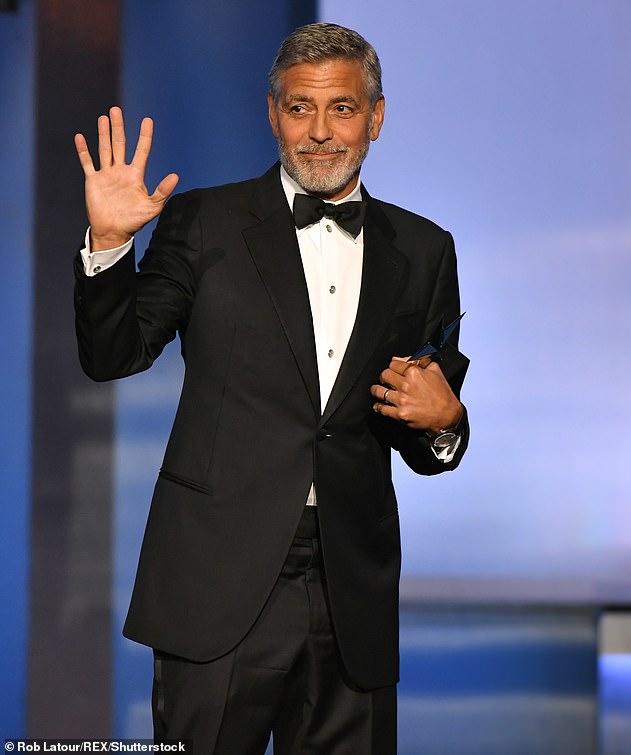 Heavy duty work: Clooney spoke to Variety about filming in harsh environments, stating that ‘you have to be really, really prepared’; he is pictured in 2018

He said: ‘I wanted it to deal with things were all dealing with today: the denying of science, playing out anger, hatred, and divisions in between the people of the United States, but also divisions that play out in other countries.’

Clooney also spoke about how his status as a parents influenced both the writing of the screenplay and his performance in multiple different scenes.

‘Theres a part of this film that is about isolation and our ability to communicate, and our inability to be near the people we love. And that is a very specific example of taking away and losing something you care deeply about,’ the actor opined. 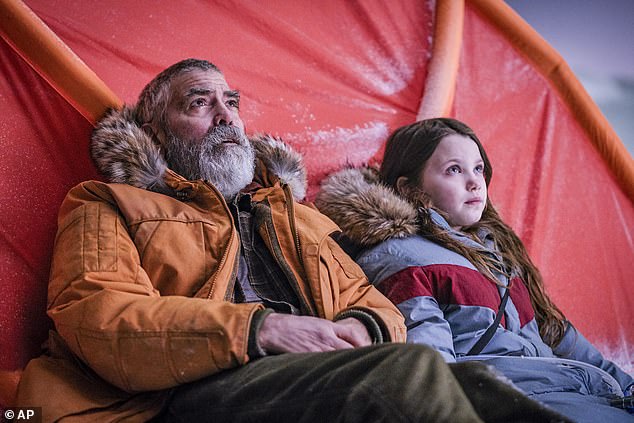 Story: In the film, George plays a scientist who ventures through the Arctic with a girl (Caoilinn Springall) to contact a crew of returning astronauts in the wake of a global catastrophe