The six female campmates took on the latest task on Sunday night’s I’m A Celebrity… Get Me Out Of Here!

And Ant and Dec were sure to inform them that the Bar-Baric trial was ‘one of the most smelly and disgusting’ trials the show had ever set.

Beverley, Hollie, Victoria, Giovanna, Ruthie and Jessica were chained and locked to a giant bar in a chamber, having to wait for keys to drop from above. 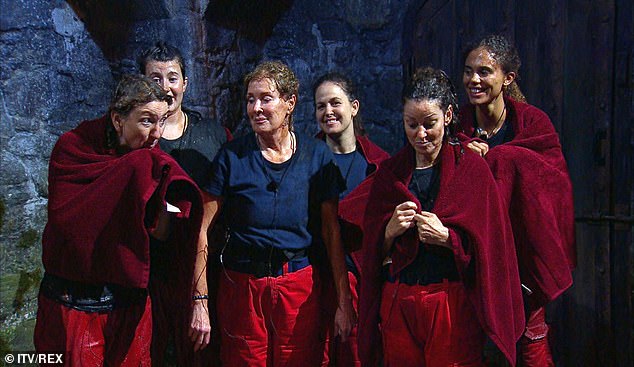 Gross: The six female campmates took on the latest task on Sunday night’s I’m A Celebrity… Get Me Out Of Here!

The keys fit each of the six celeb’s chains, allowing them to release their shackles one by one, head to the next chamber, and retrieve stars from boxes filled with creatures.

‘This will continue until you’ve released all six of you,’ Ant explained. ‘There are 12 stars up for grabs. Every star you get is a meal for camp.’

After the klaxon sounded, offal and fish guts splattered down on the women, who had to search for the keys among the gunge.

They quickly found the first key and Giovanna released herself and ran to the second chamber where she picked a box containing a tarantula and fearlessly unscrewed her stars meaning they had two meals for camp. 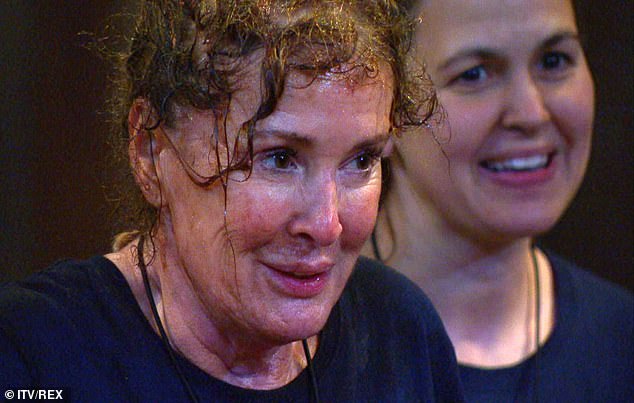 Slimy: Ant and Dec were sure to inform them that the Bar-Baric trial was ‘one of the most smelly and disgusting’ trials the show had ever set

More offal rained down and they rummaged to find the keys. Ruthie was next and after a couple of false starts released herself. Her box contained earthworms and she managed to unscrew the two stars.

Beverley was up next as the offal, fish guts and slime continued to cascade down. She unlocked herself, and made her way to her box and bravely released the stars.

Next up was Jessica whose box contained rats. Hollie followed and unscrewed her stars from a box which contained snakes.

Victoria was last, meaning that she’d been in that chamber for longest and was covered in slime.

‘You’re a hell of a woman!’ shouted Beverley as Victoria valiantly tried to release herself as time ran out.

Back at the castle camp, the boys recoiled in horror at the smell when the ladies got back.

‘We got 10 stars,’ said Victoria as the others cheered. ‘Honestly it was so vile!’

They received pigeon for dinner, much to everyone’s dismay.

‘A sombre mood tonight. The girls found the trial quite difficult and it’s a strange atmosphere, it’s the first time we’ve had this kind of thing,’ Vernon observed from the Telegraph.

Jordan said: ‘Morale is low today and I feel responsible as leader that I have to perk us up a bit.’

Earlier in the show Jordan was voted to be in charge of the camp. Viewers voted on Friday for the celebrity they’d like to see running the camp as the very first leader of the series, and the BBC Radio 1 DJ won the role.

The role means Jordan is allowed to sit in the newly set up throne, and doesn’t have to do any of the camp chores.

Speaking about his election, he said: ‘I’ve got to remember the public have voted for me!

‘They either thought this will be a laugh, he can’t even tie his shoe laces or they thought lets see how he is in charge or maybe the Great British public has faith in me and think I can do it.’

Jordan chose Victoria to be his deputy, and added of her appointment: ‘Victoria is very decisive, got a good head on her shoulders and she’s intelligent, exactly what is needed as a deputy.’

Together, Jordan and Victoria then dished out camp chores to their other campmates, and have chosen to make the camp chefs Mo and Giovanna, whilst Vernon and Beverley will be in charge of the laundry.

Maintenance chores fall to AJ and Hollie, with Ruthie and Shane taking care of the washing, and Jessica and Russell tackling the cleaning.