And on Thursday, the 28-year-old hit back at a troll who claimed ‘Botox makes girls ugly’, after she shared footage of herself undergoing the cosmetic procedure.

The reality star shared a series of exchanges between the two on Instagram Stories. 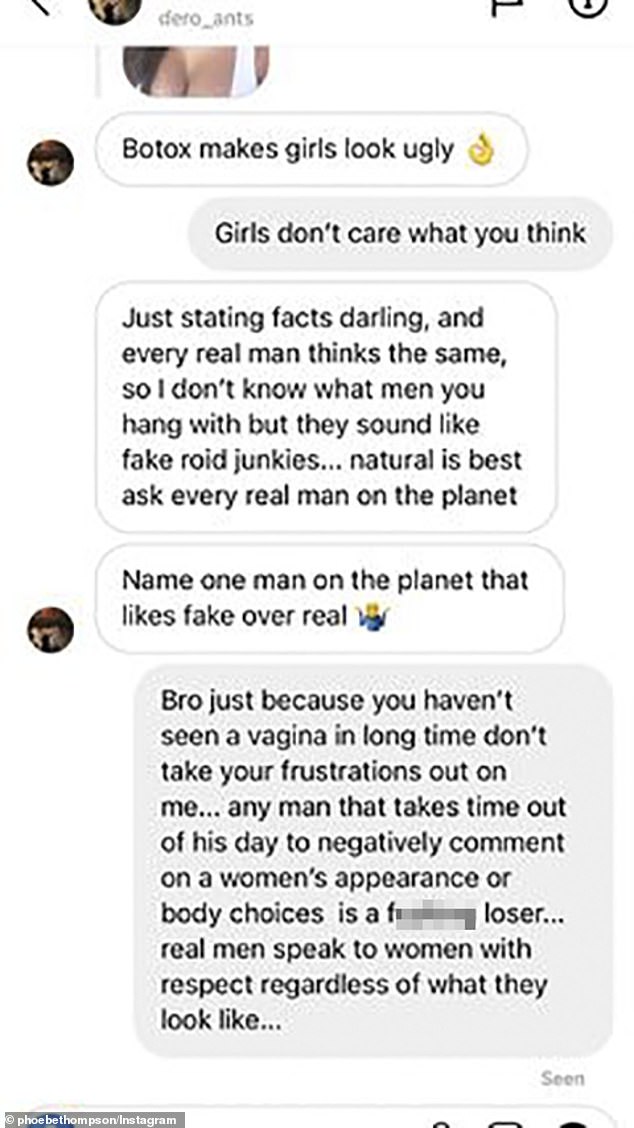 Not holding back! On Thursday, Phoebe Thompson hit back at a troll who claimed: ‘Botox makes girls ugly’, after she shared footage of herself getting the cosmetic procedure

He continued: ‘So I don’t know what men you hang out with but they sound like roid junkies… natural is best. Ask every real man on the planet.’

Phoebe was quick to hit back, saying that ‘real men speak to women with respect’. 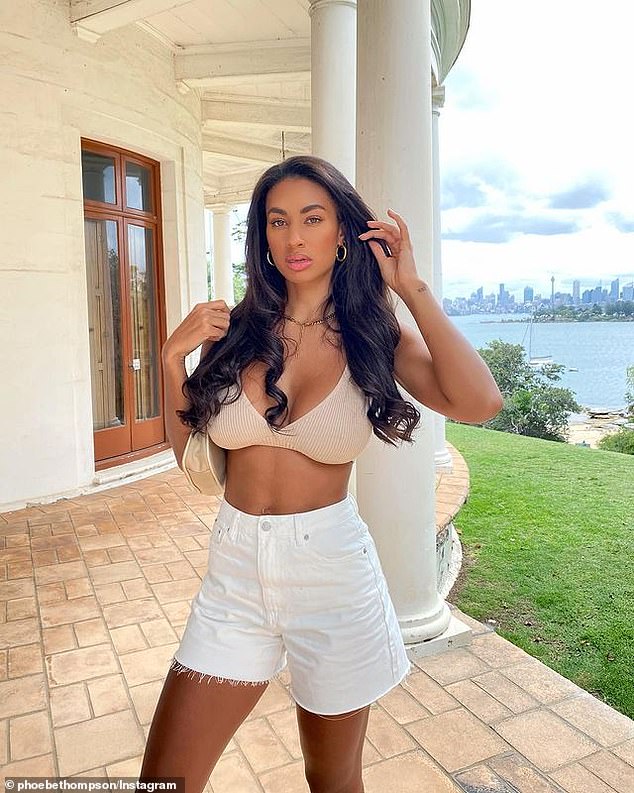 Hitting out: Phoebe was quick to slam the comment, saying that ‘real men speak to women with respect’

‘Bro just because you haven’t seen a vagina in a long time don’t take your frustrations out on me,’ she began.

‘Any man that takes time out of his day to negatively comment on a woman’s appearance or body choices is a f**king loser… real men speak to women with respect regardless of what they look like.’

The troll’s comments come after Phoebe shared footage of herself getting Botox injections in her forehead at The Cosmetic Lounge in Sydney. 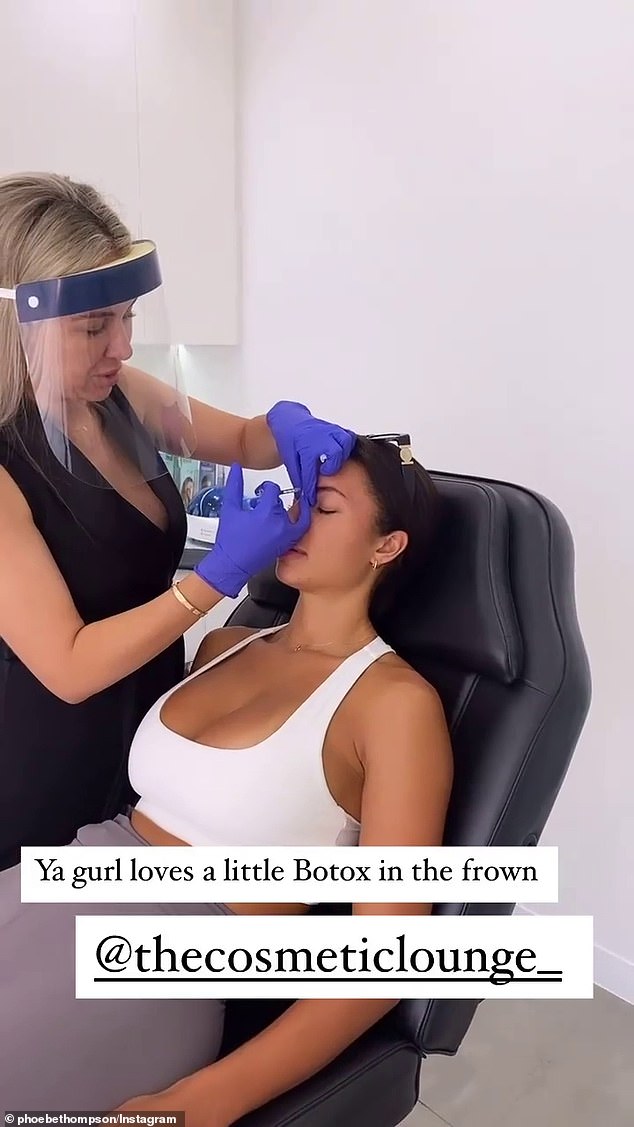 Touch up: The troll’s comments come after the Brunette beauty shared footage of herself getting Botox injections in her forehead at The Cosmetic Lounge in Sydney

‘Ya gurl loves a little Botox in the frown,’ she captioned the clip.

Phoebe looked relaxed as she lay back on the cosmetic chair in a white crop top and beige workout shorts while receiving the injection.

The credit analyst admitted she’d had some ‘cheeky cheek filler’ injected as well.

Phoebe appeared on the 2019 season of Love Island Australia. She famously enjoyed a short-lived same-sex fling with co-star Cassie Lansdell. 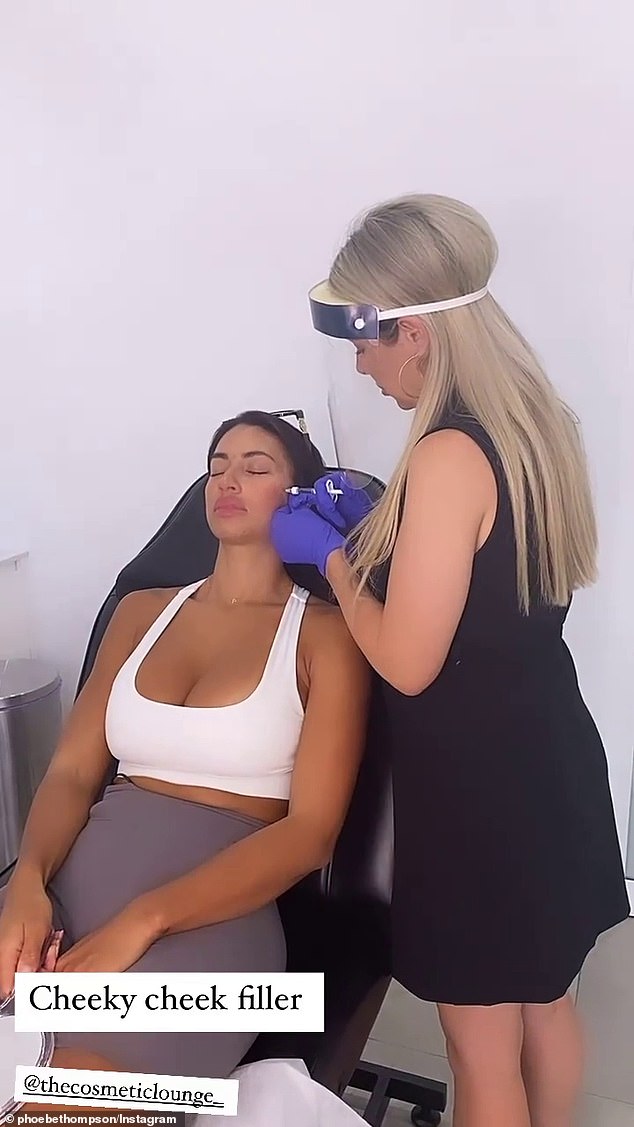 Procedure: The credit analyst also admitted that she had some ‘cheeky cheek filler’ injected as well