Matthew McConaughey has given an insight into his life by sharing a series of eye-opening confessions about his eccentric habits and hilarious childhood antics.

The Hollywood actor, 51, revealed that some of his favoured activities include wearing a headlamp to cut his fingernails and sampling pickled pig’s feet.

And, in an interview with Empire magazine, the Oscar-winning Dallas Buyers Club star even confessed that he once dressed as a girl to win a schoolgirl beauty contest. 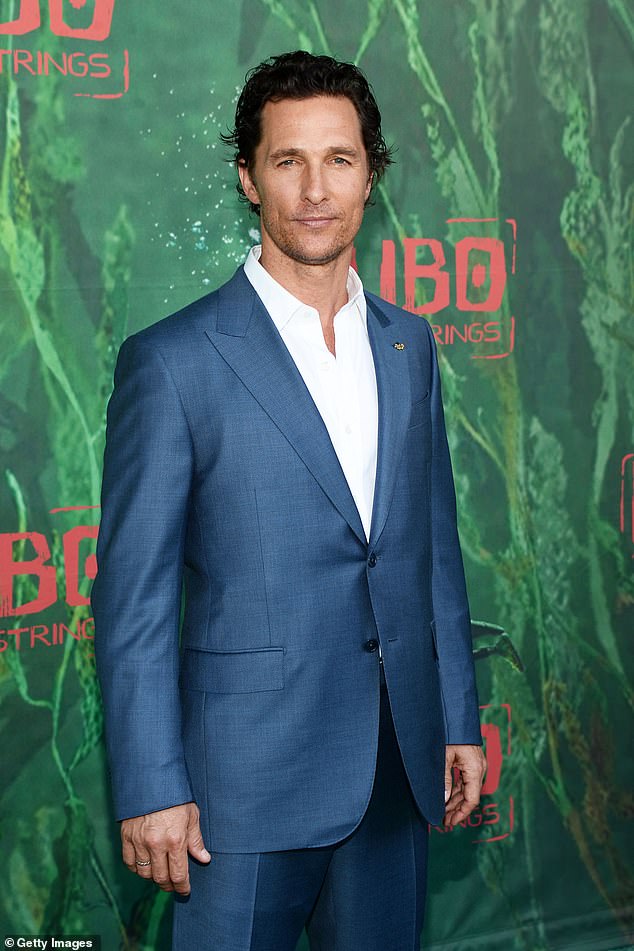 Insight: Matthew McConaughey has given an insight into his life by sharing a series of eye-opening confessions about his eccentric habits and unconventional past. Pictured in 2016

He said: ‘I’m an extremely talented fingernail clipper. I’ll get a headlamp on, glasses. Sit down with a cocktail and have a nice 45-minute session. It’s very relaxing to me for some reason.’

Asked about the strangest food he has eaten he replied: ‘A pickled pig’s foot that I picked up at an 18-wheeler gas station on the highway.

‘That didn’t taste great going down and it reminded me I’d eaten it for days afterwards. It was in a big jar of vinegar. For possibly years. I haven’t been back for a second.’ 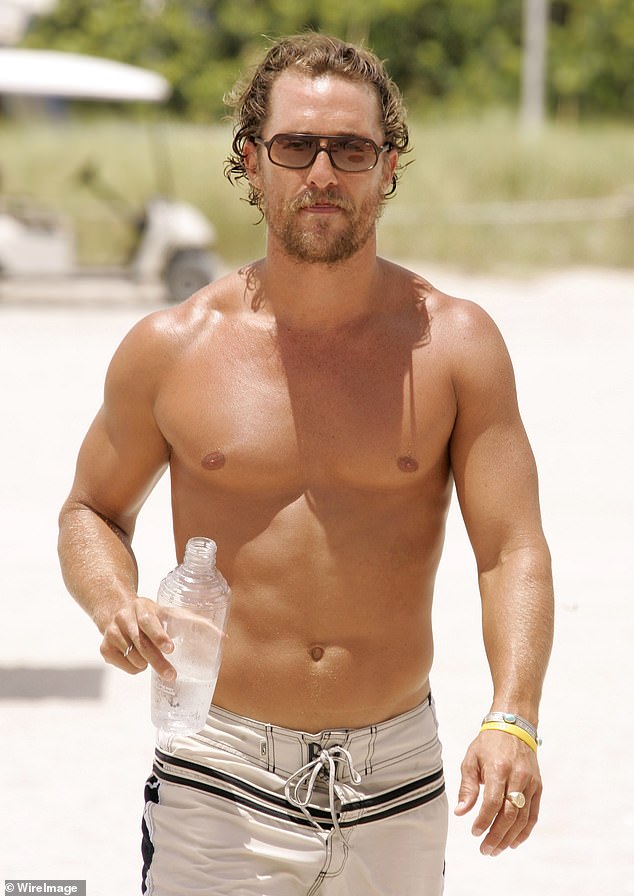 Confessions: The Hollywood actor, 51, revealed that some of his favoured activities include wearing a headlamp to cut his fingernails and sampling pickled pig’s feet.

As the interview progressed, the Wolf Of Wall Street star was asked if he had ever stolen anything, to which he responded: ‘Robes in hotels.

‘This one place had this very thin terry-cloth robe. When I wore it, if it was chilly, I was warm. If it was hot, I didn’t get hotter.

‘It was the perfect thickness and the loops were way down low. I nicked that baby.’

The father-of-three, who is married to Camila Alves, also said he entered and won a child beauty contest for girls when he was aged seven. 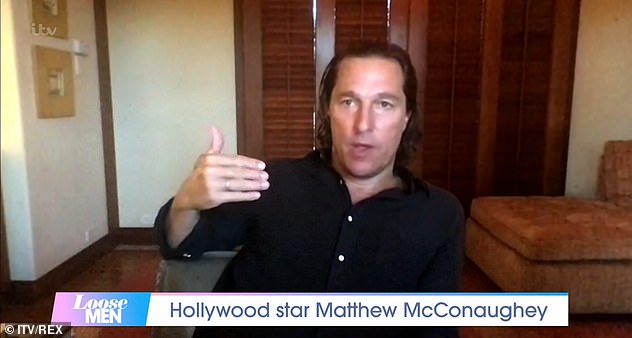 Bold move: The star’s confessions come after he revealed he once turned down a $14.5 million (£10.9 million) offer to make an ‘intentional’ switch from romantic comedies to dramas

He recalled: ‘In 1977, I entered the Little Mister Texas contest. I remember getting a trophy. My mom took a picture of me with it and we had it in the kitchen.

‘Every morning at breakfast she’d go, “There you are son, Little Mister Texas”. Then, I was getting pictures for my book and I zoomed in on the plate on the trophy. It said “Runner-up”.

‘But I may not have turned out to be where I am now if I hadn’t been lied to so wonderfully.’

The star’s list of confessions comes after he revealed he once turned down a $14.5 million (£10.9 million) offer to make an ‘intentional’ switch from romantic comedies to dramas. 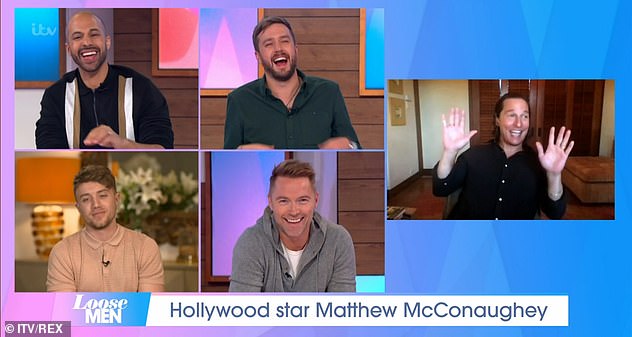 During Thursday’s edition of the first-ever Loose Men, the actor said his mother Kay, 88, and brothers Rooster, 66, and Pat, 58, were left puzzled by his decision, with the screen star admitting: ‘They still ask me if I’m mentally vegetated!’

He reflected on struggling to advance his career due to being typecast as a sex symbol, and took a stand by refusing to accept those roles for nearly two years.

‘My mother and brother, to this day, are like, ”What the hell was your problem? Are you mentally vegetated?” I get it, I get it… but it paid off, you know.’ 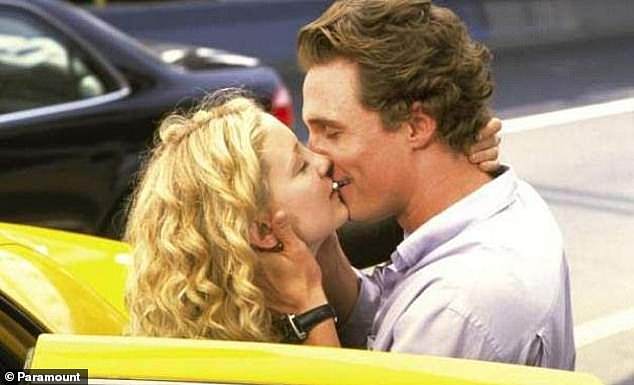 ‘It paid off’: During Thursday’s Loose Men, the actor, 51, reflected on being typecasted as a sex symbol (pictured with Kate Hudson in 2003’s How To Lose A Guy)

On making the shift from movies such as The Wedding Planner, Failure to Launch and Ghosts of Girlfriends Past to hard-hitting films like Dallas Buyers Club and Mud, Matthew said: ‘Yeah, it was intentional.

‘I had control of the script for Dallas Buyers Club but no one wanted to make a period piece AIDS drama with McConaughey in the lead.

‘So I was doing rom-coms at the time, they were going well, they were paying me well, I enjoyed doing them, but they were doing so well that all the dramas I wanted to do were not getting offered to me.’

Going to great lengths to make a career change, the media personality shared: ‘Because I couldn’t do what I wanted to do, which was the dramas, I stopped doing the rom- coms. I took almost two years off. 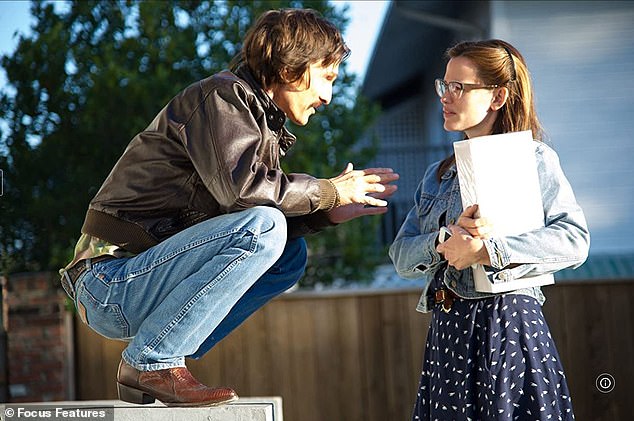 ‘I took two years off’: Matthew touched on making the shift from movies such as The Wedding Planner to hard-hitting films like Dallas Buyers Club (pictured with Jennifer Garner in 2013)

‘I didn’t work because I got offered nothing but rom-coms and decided not to do them. For two full years, I was back home here in Texas wondering if I was ever going to work in Hollywood again.

‘I was thinking about getting another job and doing something else. Two years went by and all of a sudden, being gone, not being in the rom-coms, I became a new good idea in Hollywood to go and do the dramas I wanted to do and one of them being Dallas Buyers Club.’

Elsewhere in the interview, the producer, who recently released his autobiography Greenlights, discussed how far he’d go to commit to a job, including gaining and losing weight.

The Dazed & Confused star said: ‘It’s not like I am a different person coming home. It’s like my wife said, she goes, she is still sleeping with her man or her husband every night but it’s a different part of her husband. 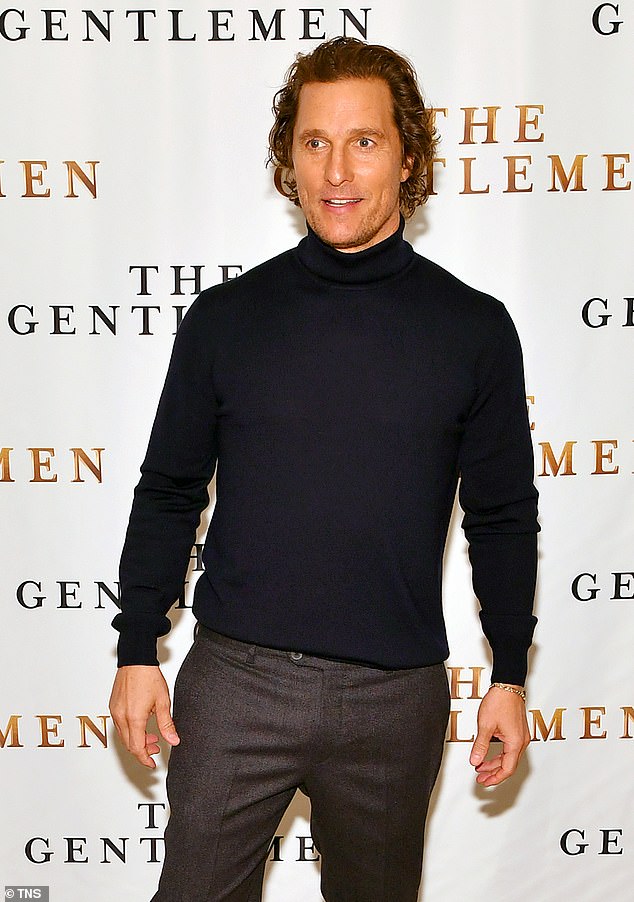 Oscar winner: The star scooped an Oscar for his role in The Dallas Buyers Club. Seen in Janaury

‘The kids think I am the best dad in the world because I am ‘Yes’ to pizza, milkshakes for breakfast, stay up as late as you want. I go do something like Dallas Buyers or True Detective, I am still fun but I am a little more acerbic, a little more clinical on things. 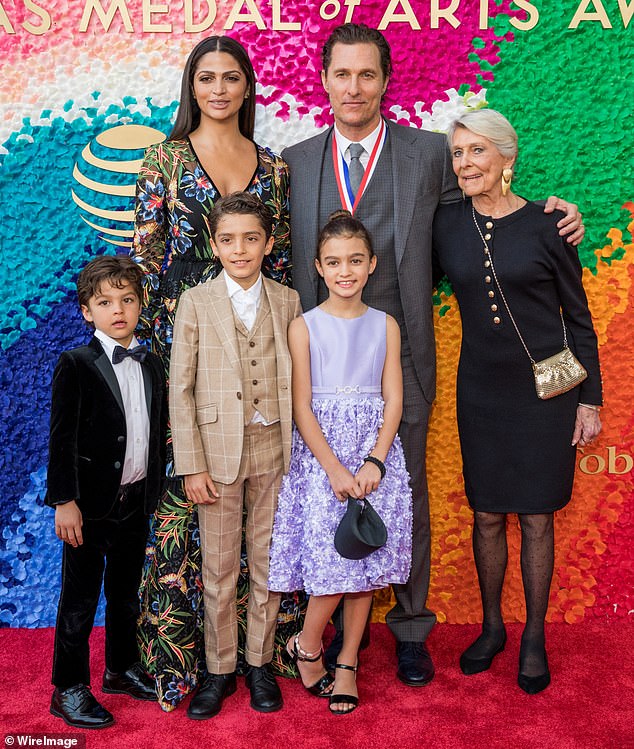 Family man: The screen hunk shares with Liva, 12, Vida, 10, and Livingston, seven, with Brazilian model Camila Alves, 38. Pictured with his mother Kay in 2019