More than 1 million people traveled by plane in the United States on Friday despite the Centers for Disease Prevention and Control (CDC) issuing new guidelines last week as Dr Anthony Fauci urged Americans to do a ‘risk-benefit assessment’ before Thanksgiving travel.

With the coronavirus surging out of control, the nation’s top public health agency pleaded with Americans on Thursday not to travel for Thanksgiving and not to spend the holiday with people from outside their household.

Despite those warnings, 1,019,836 passengers flew in the US on Friday, according to the Transportation Security Administration (TSA).

That number is 1.5 million less than on the same day in 2019 and it’s the second-highest number of people to travel by air since the pandemic hit the US in March. On October 18, the TSA reported that 1,031,505 people boarded flights.

Meanwhile, Dr Fauci has urged Americans to really look at the bigger picture before they travel or make plans for the holidays. 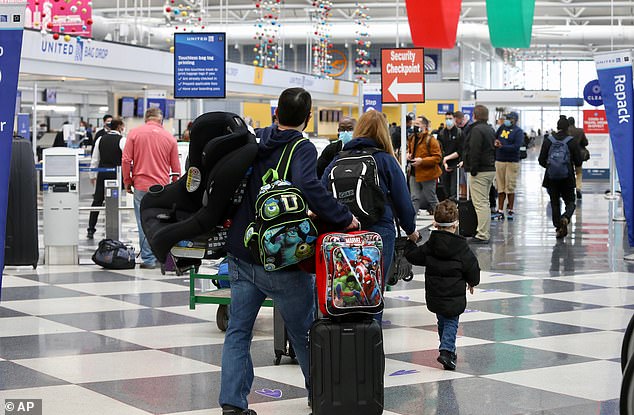 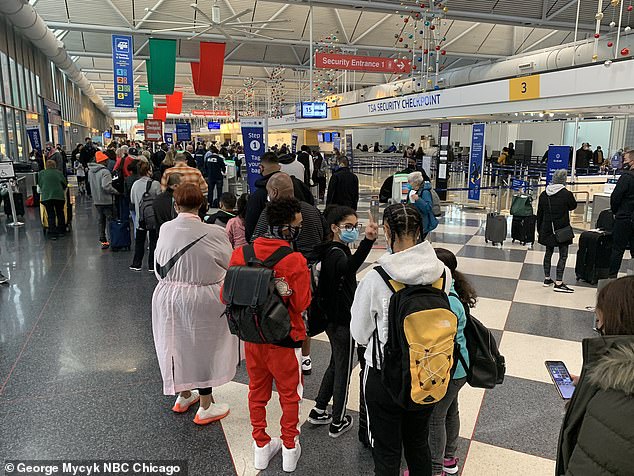 With the coronavirus surging out of control, the nation’s top public health agency pleaded with Americans (pictured in Chicago on Friday) on Thursday not to travel for Thanksgiving and not to spend the holiday with people from outside their household 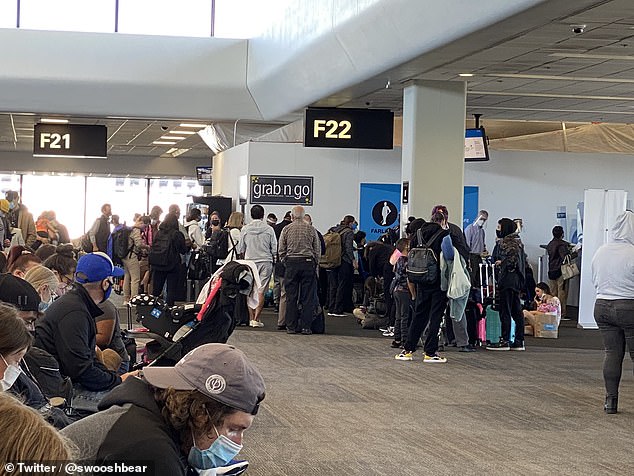 Despite those warnings, 1,019,836 passengers flew in the US on Friday, according to the Transportation Security Administration (TSA). Passengers are seen at the San Francisco International Airport on Friday

‘I think the people in this country need to realistically do a risk-benefit assessment,’ the director of the National Institute of Allergy and Infectious Diseases told NBC anchor Chuck Todd on Meet the Press.

‘Every family is different. Everyone has a different level of risk that they want to tolerate.

‘But when you think of the holiday season and the congregating indoors at what are innocent, lovely functions, like meals with family and friends, you have got to at least think in terms of evaluating, do you have people in your family that are elderly, that might have underlying conditions, like someone on chemotherapy, or other things that weaken their immune system?’

Fauci said that families should also consider the areas people would be traveling from.

‘Do you really want to get a crowd of 10, 15, 20 people, many of whom are coming in from places where they have gone from crowded airports, to planes, getting into the house?’ he said.

While recognizing that some will host guests this holiday season, Fauci said they should ‘at least give you and your family the benefit of having considered what is the risk-benefit of doing that’.

The CDC’s Thanksgiving warning came last week and was some of the firmest guidance yet from the government on curtailing traditional gatherings to fight the outbreak. 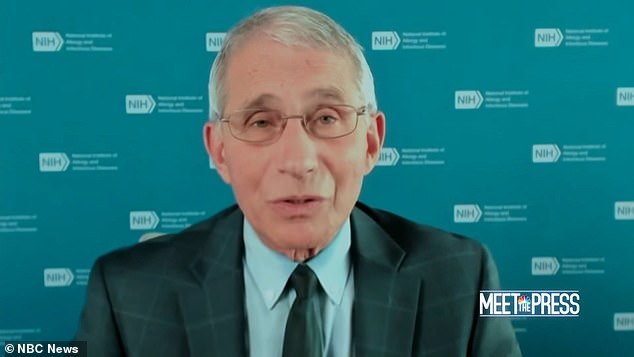 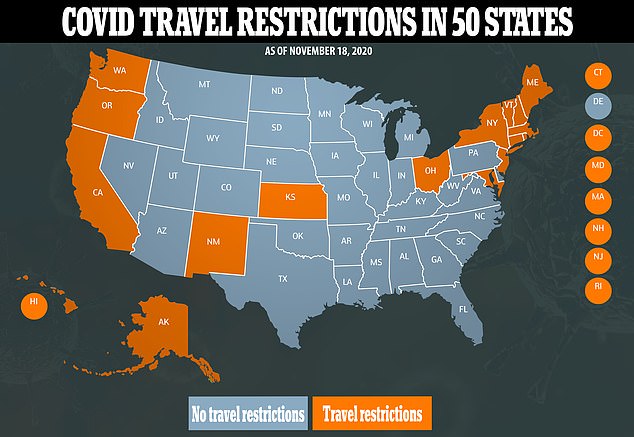 While recognizing that some will host guests this holiday season, Fauci said they should ‘at least give you and your family the benefit of having considered what is the risk-benefit of doing that’. This chart shows the states with travel restrictions in place 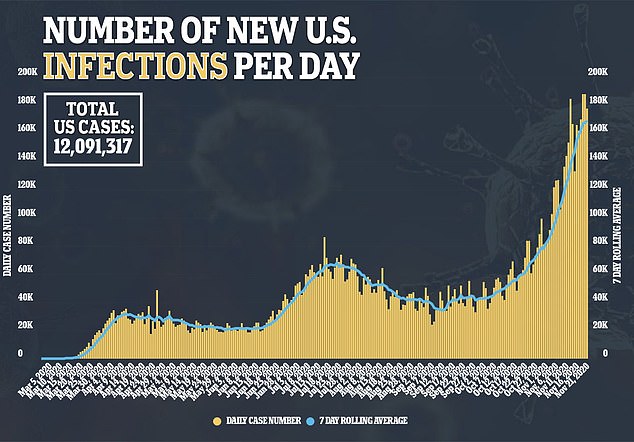 Dr Erin Sauber-Schatz, of the CDC, cited the more than 1 million new cases in the US over a one-week period as the reason for the new guidance.

‘The safest way to celebrate Thanksgiving this year is at home with the people in your household,’ she said on Thursday.

If families do decide to include returning college students, military members or others for turkey and stuffing, the CDC is recommending that the hosts take added precautions: Gatherings should be outdoors if possible, with people keeping 6 feet apart and wearing masks and just one person serving the food.

The deadly comeback by the virus has been blamed in part on pandemic fatigue, or people getting tired of masks and other precautions. And surges were seen over the summer after Memorial Day and July Fourth, despite blunt warnings from health authorities.

The US has had more than 12 million diagnosed infections and at least 255,909 deaths from the coronavirus. CDC scientists believe that somewhere around 40 per cent of people who are infected do not have obvious symptoms but can still spread the virus. 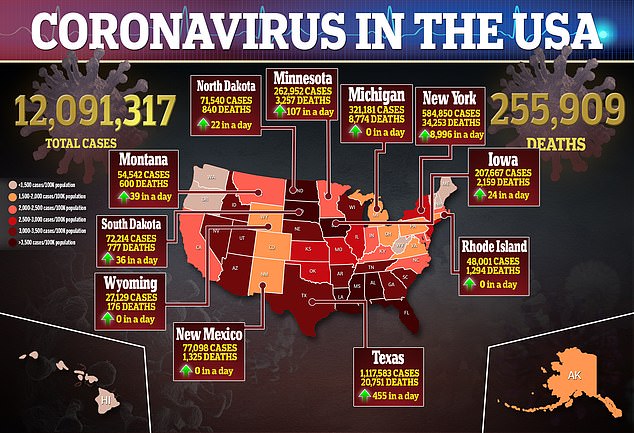 The US has had more than 12 million diagnosed infections and at least 255,909 deaths from the coronavirus. CDC scientists believe that somewhere around 40 per cent of people who are infected do not have obvious symptoms but can still spread the virus 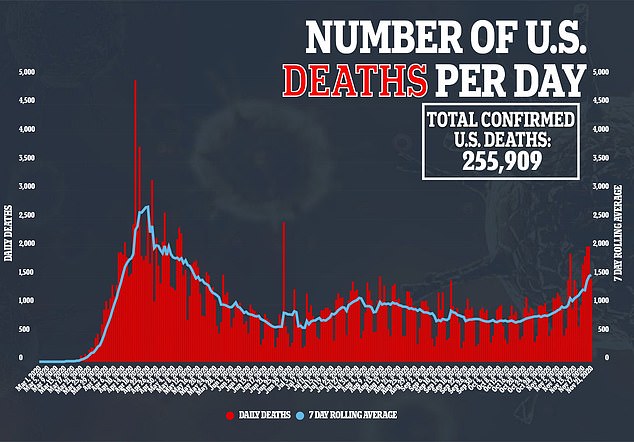 California Gov Gavin Newsom on Thursday announced the imposition of an overnight curfew on most residents as the most populous state tries to head off a virus case surge that officials fear could tax the state’s health care system.

What officials called a limited stay-at-home order requires nonessential residents to stay home from 10pm to 5am. The order started Saturday and will last until December 21 but could be extended.

It covers 94 per cent of the state’s nearly 40 million residents.

‘The virus is spreading at a pace we haven’t seen since the start of this pandemic and the next several days and weeks will be critical to stop the surge. We are sounding the alarm,’ Newsom said in a statement.

Officials will reevaluate COVID-19 caseloads on December 13 and if they have not eased, she said ‘a full state lockdown’ will follow.

Hospitals are struggling to keep up with non-coronavirus cases ranging from broken bones to heart attacks in states where COVID-19 cases are tying up resources.

In Kansas, rural hospitals are running into difficulty trying to transfer patients to larger hospitals for more advanced care.

‘Whether it is regular pneumonia or appendicitis or fractures that need surgery, they have a limited amount of beds in their facilities and they are not taking a lot of these routine cases,’ said Perry Desbien, a nurse practitioner who works in Smith Center and other rural communities.

‘They are saying, “Send them home. Have them follow up in the office. Unless it is life-threatening, we don’t want to see them either.”‘

Illinois Gov J.B. Pritzker noted that with COVID-19 patients claiming a quarter of the state’s hospital beds, there are fewer resources for heart attack patients, expectant mothers or cancer patients.

‘When we let our hospitals get overrun or even close to it, it is all of us suffering,’ Pritzker said.

The Mayo Clinic Health System, a Midwest network of hospitals and clinics run by the world-renowned Mayo Clinic, reported that 905 staff members have been diagnosed with COVID-19 in the past two weeks.

Dr Amy Williams, executive dean of Mayo Clinic Practice, said the vast majority were exposed in the community and not at work.

‘It shows how widely spread this is in our communities and how easy it is to get COVID-19 in the communities here in the Midwest,’ she said.

In Kansas, 178 employees and doctors at a Topeka hospital had active coronavirus cases or were isolated and on leave because of contact with someone who had coronavirus.

And the University of Kansas Hospital in Kansas City and nearby clinics had 206 employees, including physicians, nurses and support staff, out as of Tuesday after testing positive.

An additional 260 were not at work and quarantining while they awaited test results.

The positivity rate — the percentage of tests coming back positive for the virus — has taken on a more prominent role in the nation’s response to the crisis in recent days.

New York City shut down in-person classes in the nation’s largest school system last week after the positivity rate surpassed 3 per cent. That angered families who believe it is too stringent a standard and question why bars and restaurants can remain open.

The positivity rate has soared to record levels all around the nation. South Dakota, Iowa and Wyoming’s rate are all averaging above 50 per cent, and the national average is now 10 per cent.

Health experts caution that there are weaknesses in the positivity data because states calculate the rate differently.

But they say the overall trend is not in dispute, and it indicates severe spread and, in many places, insufficient testing.