A single mother of two who illegally drove away from a courthouse just minutes after a judge disqualified her from driving escaped jail today.

Hotel housekeeper Simara Knopka, 39, was hauled back before the judge who previously dealt with her after she was pictured flouting a two-year road ban.

The Brazilian mother-of-two, who does not have a valid UK driving licence, had earlier been warned by Recorder Nick Clarke QC she faced being locked up if she was caught behind the wheel.

But after leaving Manchester Crown Court earlier this month, Knopka was spotted at the wheel of her Vauxhall Corsa and driving 20 miles home to Macclesfield, Cheshire, after initially sitting in the passenger seat. 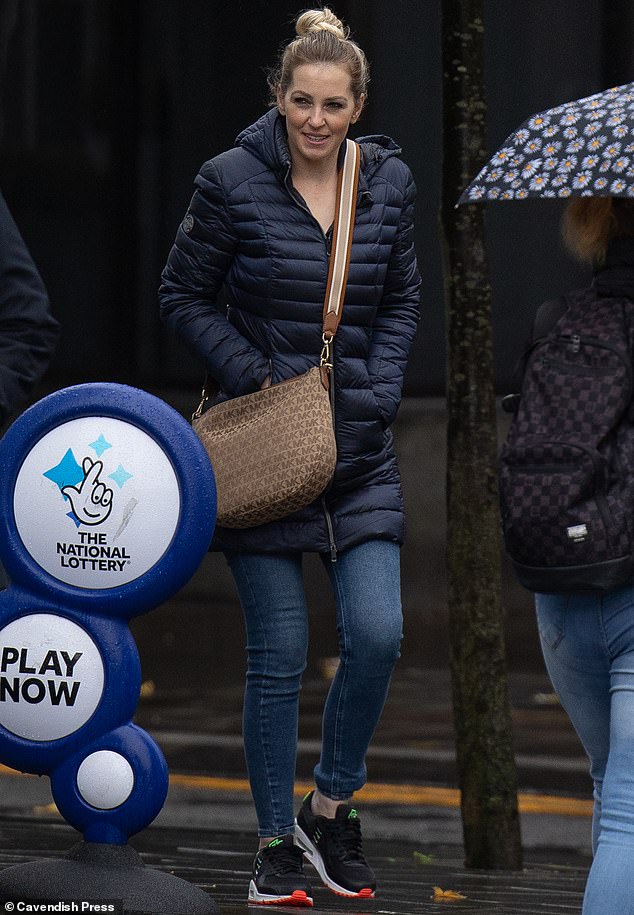 Simara Knopka, 39, pictured outside Manchester Crown Square today, had originally pleaded guilty to dangerous driving over an accident in which she drove the wrong way along the M60 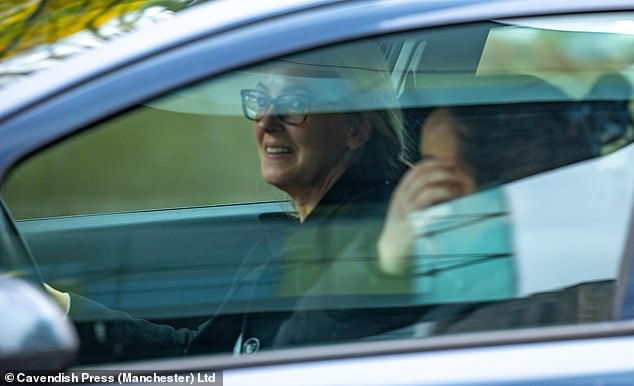 It emerged she had also driven herself to court despite already been banned from the roads under the terms an interim disqualification.

Today Knopka, who admitted driving whilst disqualified and having no insurance, was handed four months custody suspended for two years. She was also fined £1,000 and ordered to pay £340 in costs.

Sentencing, Mr Recorder Clarke QC told her: ‘When I sentenced you many might have regarded my original sentence as lenient.

‘But you repaid the mercy I showed you on that day by immediately driving home. The real aggravating feature here is your flagrant disregard for the court order I made.

‘You were arrested and spent a day in a police cell and five nights in jail and it was thoroughly deserved. It will have bought home to the public how important it is to obey court orders.

‘It clearly shows a proper and timely response by the courts and police. Your apology is accepted.’

‘This sentence need not be immediate but you need to make sure you comply with the order and the suspended sentence or you will find yourself back in jail.’

Knopka had originally pleaded guilty to dangerous driving over an a 1am accident on May 28 this year in which she drank two glasses of wine then drove the wrong way along the M60 near Worsley whilst checking Google Maps for directions on her mobile phone. 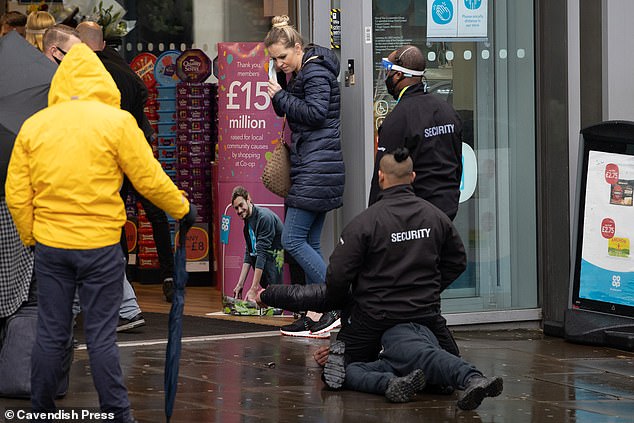 Knopka, pictured outside Manchester Crown Square today, admitted driving while disqualified and having no insurance, and was handed four months custody suspended for two years 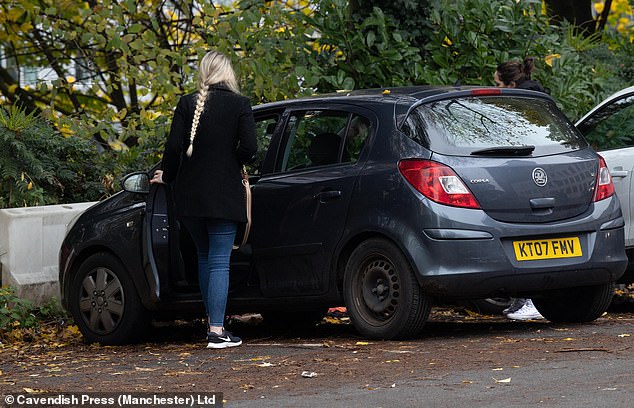 Knopka getting in her car before driving earlier this month after leaving Manchester Crown Court. The mother was earlier warned she faced being jailed if she caught behind the wheel

She crashed her son’s Nissan Micra into an oncoming Nissan Qashqai as she was about to exit onto a slip road.

She was breath-tested at the scene but found to be under the alcohol limit. It emerged she had not passed a driving test in the UK and was being giving driving lessons by her estranged husband.

On November 5 Knopka appeared in court and was fined £600 as well as being handed the two-year road ban.

But Craig MacGregor, prosecuting, said: ‘Having been given the opportunity by the court the defendant left the court building with your honour’s warning still ringing in her ears and decided to drive home.

‘The driving was caught on camera by an eagle-eyed press photographer and if it had not have been for him these offences would have never have come to light. This was a brazen, if not barefaced disregard for orders of the Crown Court.

‘Police arrested the defendant at her home address later that day. She was interviewed at the police station and admitted the offences. 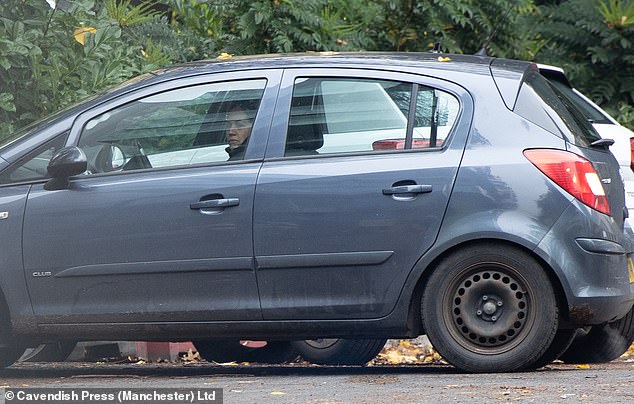 On November 5, Knopka appeared in court and was fined £600 as well as being handed the two-year road ban, before driving away from court (pictured) 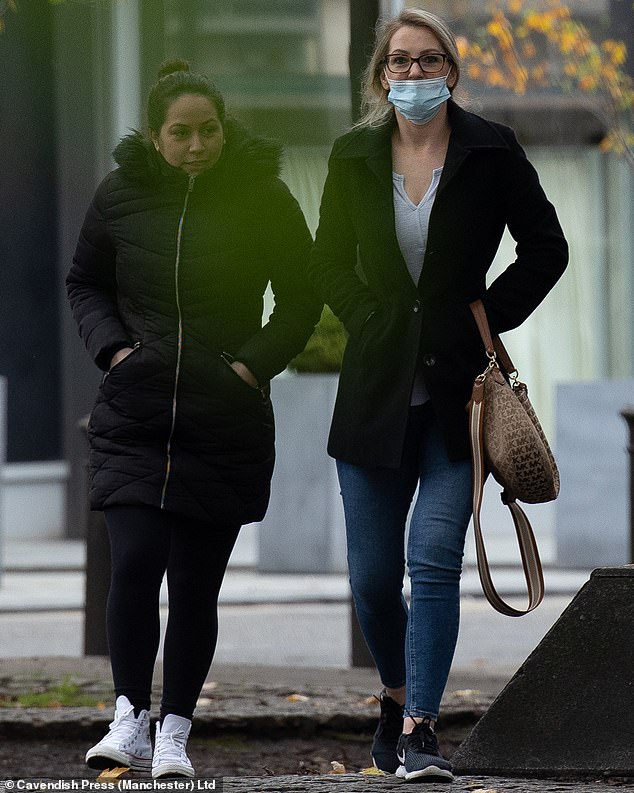 It emerged that Knopka (pictured right, earlier this month) had also driven herself to court despite already been banned from the roads under the terms an interim disqualification

‘That choice to drive should have came as no surprise as she had clearly driven to the court for the hearing, even though banned. She said she drove to court as she did not have many people in the UK to support.

‘Miss Knopka has not go and never has had a full UK licence, was on an interim disqualification when she deliberately chose to drive to and from court. Even though she had a friend with her, she drove not her friend.

‘She has said that the car belongs to her 19 year old son, he did not drive her to and from court. She chose not to come to court by public transport.’

Her lawyer, Thomas McKail, said: ‘Until this year she was a woman who had never been before the courts in the UK or Brazil.

‘She asks for an element of mercy today although she appreciates that may be a big ask having last appeared on 5 November. She pleaded guilty to these offences and the previous offences and accepts her decision to drive to an from court on that day was a lapse of judgement.

‘Her friend had agreed to drive her to court but she was let down by her friend Rafa who sits at the back of court today. Due to her lack of sleep, anxiety and being extremely convened and worried about the proceedings she decided to drive in order to be on time.

‘We submit this was no flagrant disregard for the interim disqualification. She considered it necessary to ensure she appeared in court on time.

‘Her decision to drive that day was an act of pure lunacy, compounded by the fact that following the sentence she had been told not to drive. However, she was still in shock from the court proceedings.

‘She wishes to apologise to you and the public for this act. She is under no illusion about the dangers posed and understands the angry reaction from the Manchester public.

‘She purchased the car in question for her son who does have a UK driving licence but was in Brazil at the time.

‘This was not a flagrant disregard for the law. This was a lapse of judgement by a 39-year-old mother of two who has been experiencing mental health problems throughout 2020.

‘She split up from her husband in January 2020 who is an Italian man although that is not an excuse for her behaviour. She says 5 November was the only time she drove the vehicle in question.’