Mummy blogger Constance Hall’s life was turned upside down when her husband Denim Cooke was involved in a ‘catastrophic’ motorcycle accident in August.

And as he continues to recover from a collapsed lung, crushed spine and a brain injury, the influencer unveiled on Friday that she’s now the proud owner of a permanent momento to remind her that ‘everything will be OK’.

On Instagram, the 36-year-old revealed she now has a ‘crown’ tattooed on her forehead – and Denim, 45, is set to get the same inking on his head in future. 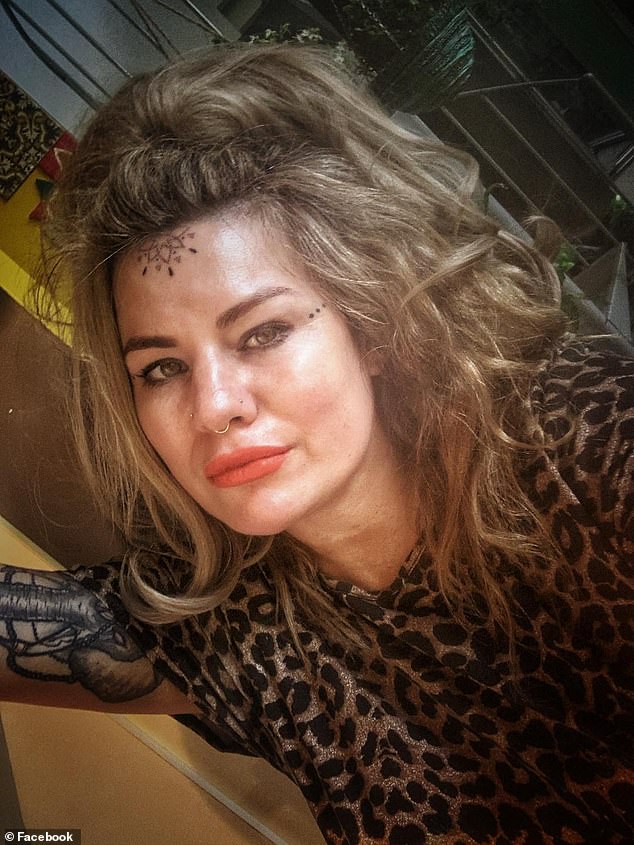 New ink: Mummy blogger Constance Hall revealed she now has a crown tattooed on her forehead, to remind her that ‘everything is going to be OK’ after her husband Denim’s motorcycle accident

Alongside an image showing off her drastic new ink, Constance wrote: ‘Today, I had my crown tattooed on.

‘Two of my friends were against it, so I decided not to consult anyone else coz sometimes when you know you just know.’

She continued: ‘The timing was perfect. We had a s****y week, big reminders of what we lost in Denim’s accident, the hardships that will last forever. Denim needs to sleep and rest his brain constantly and the doctors tell me it’s the best thing for him.’

She went on to say that she ‘misses’ being able to do everything with her other half – including simple things, such as going out for coffee or a walk on the beach. 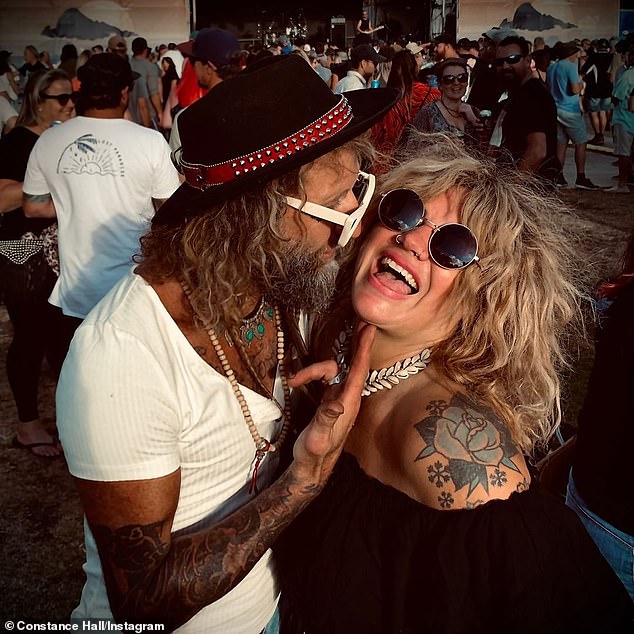 The long road: Denim (left) is currently recovering from a collapsed lung, a crushed spine and a brain injury after the horror accident earlier in the year

‘It’s shameful how selfish that is when he’s coming to terms with him new life,’ Constance, who appeared on Dancing With The Stars in 2019, added.

‘But today I had this crown, my crown tattooed on my head. It tells me that everything is going to be OK, because I can handle so much more then I think, that all we really have is today and today was a beautiful day.’

She added that Denim pushed through his pain to get up for his appointment on Friday, before saying that ‘he too wants his crown tattooed on’ in future.

She signed off by revealing she had a surprise announcement to make on Monday, in the form of a ‘revolutionary collaboration’ saying ‘some of you may need converting’.

Just last month, Denim spoke out about his accident for the first time on his personal blog, The Cooke Trinity, after falling off his bike in Perth on August 16. 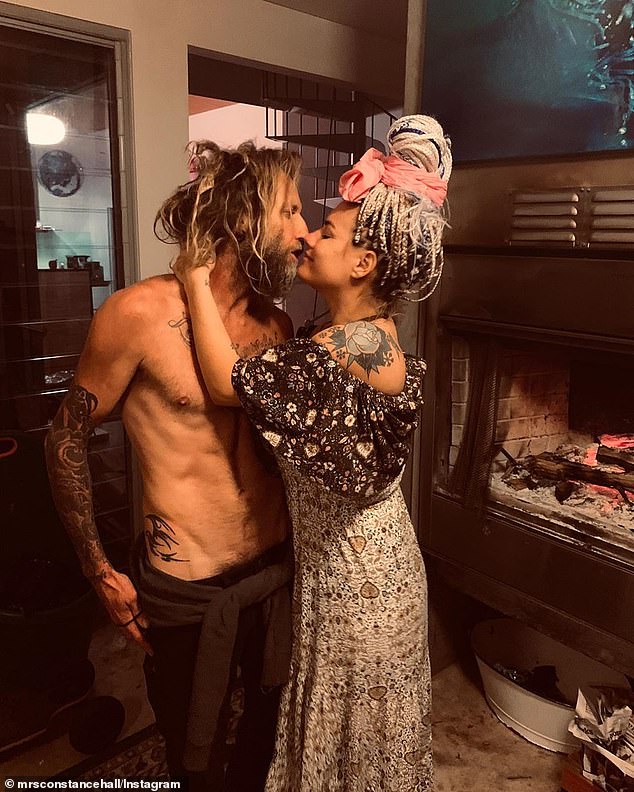 Moving on: Denim spent more than six weeks in the hospital before being discharged into Constance’s care on October 2 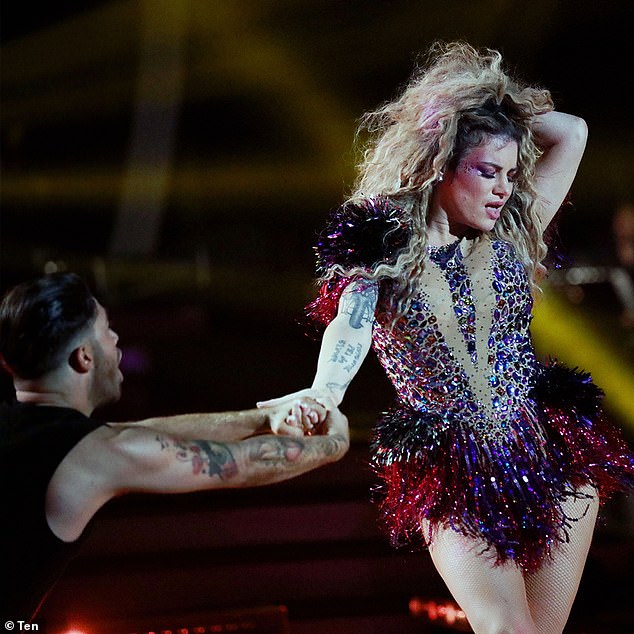 Well-known: Mummy blogger Constance came third in Dancing With The Stars back in 2019

He explained that doctors were mostly worried about the brain injury he had sustained, rather than the broken bones, crushed spine and collapsed lungs, because it could lead to irreversible brain damage later on.

‘There was a time where the hope of me ever being the man I am today, able to communicate like I do and maintain these relationships was minimal,’ he said.

Denim said his wife was repeatedly warned that it would be a ‘miracle’ for him to make a full recovery, but the father-of-seven was mostly in a coma ‘dreaming’ while she stood by his side.

‘I credit her influence on my fragile state to loving me back to myself. It took a few weeks and an amazing amount of her love, compassion and patience on all fronts,’ he said.

‘I am only now understanding the relentless hard, repetitive, heartbreaking and exhausting work that was involved in bringing me back.’ 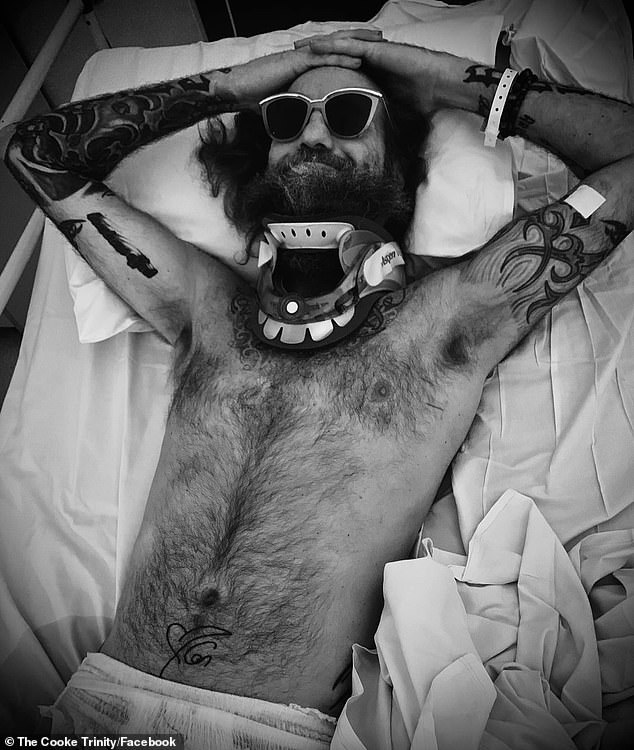 Speaking out: Denim, 45, addressed his following on The Cooke Trinity – his personal blog – after falling off his bike in Perth on August 16 and having to be airlifted to hospital

He is grateful not to have been left with any lasting disabilities and will only need to manage chronic pain as a result of the fall, something he considers getting off lightly.

Denim spent more than six weeks in the hospital before being discharged into Constance’s care on October 2.

Constance split from her former husband of six years Bill Mahon in April 2017 and was engaged to Denim two months later.

In October 2017 the couple announced they they were expecting their first child together.

The pair tied the knot in a bohemian forest ceremony at Karriview Lodge near Margaret River, Western Australia, in January 2018 following a whirlwind romance. 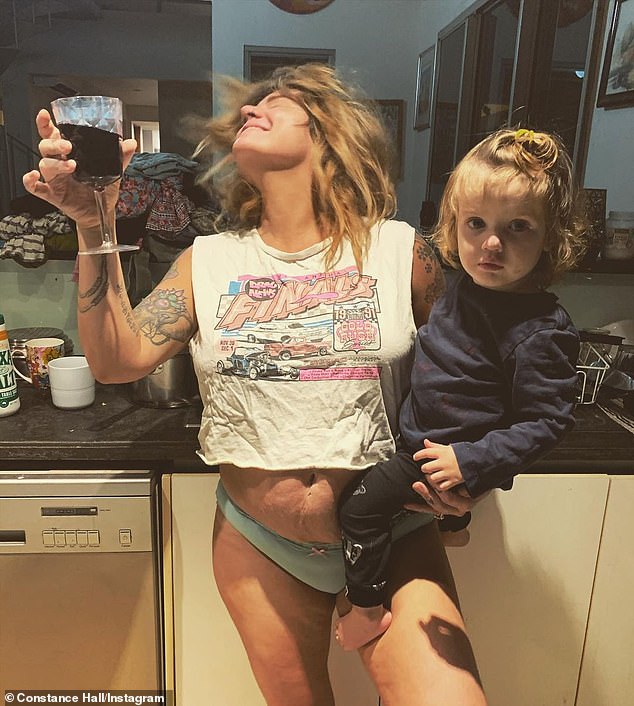