She is set to make her Dancing On Ice debut on Sunday.

And Myleene Klass cut a casual figure in a longline padded coat on Thursday as she squeezed in some last-minute skating training.

The radio host, 42, braved the chilly January weather in a black hoodie, leggings, and knitted legwarmers after admittingshe hopes to walk away from the ITV skatingshow with a ‘bum likeJennifer Lopez’. 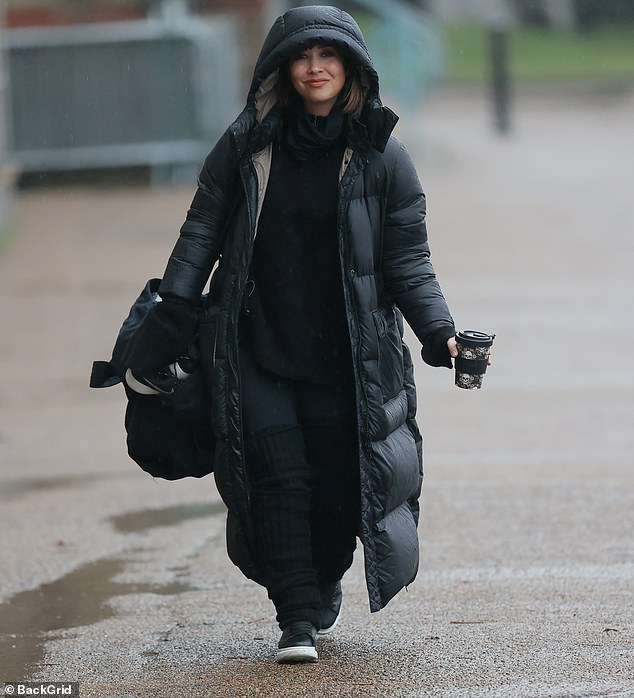 Low profile: Myleene Klass cut a casual figure in a longline coat and loungewear on Thursday as she squeezed in some last-minute training before her Dancing On Ice debut on Sunday

Myleene styled her chocolate tresses in a sleek straight bob, and she enhanced her visage with soft make-up as she was seen clutching a ceramic coffee mug.

The mother-of-three donned casual footwear and draped a sports bag over her shoulder before entering her training venue.

The radio host’s appearance comes after she admitted she is hoping to walk away from Dancing On Ice with a ‘bum like J-Lo’s’.

Jennifer,51, left fans around the world aghast, as she showed off her incredibly age-defying figure in all its glory during a recent vacation to Turks and Caicos. 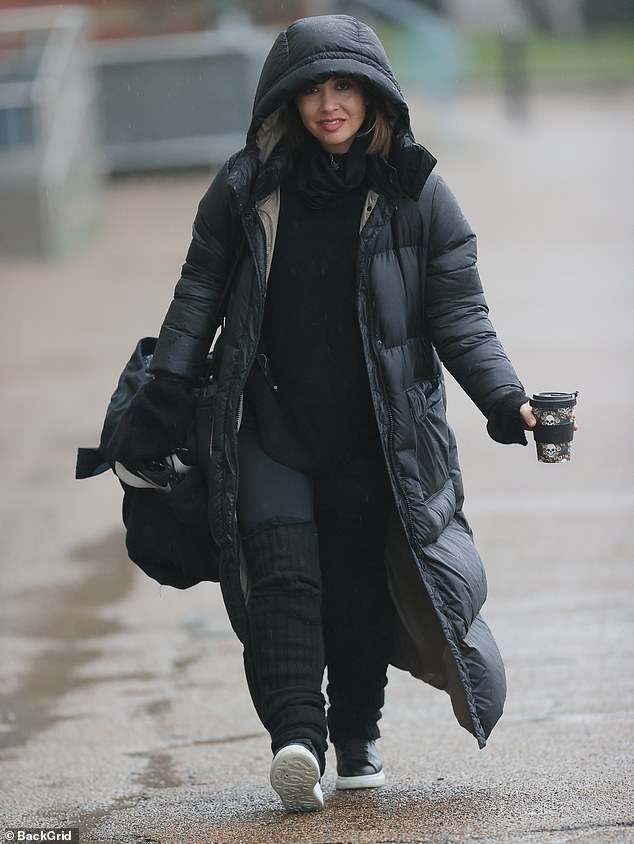 Talking ahead of the show start on Sunday, Myleene said: ‘When else would I get this chance? I’m a mum of three, a step-mum of two, there’s seven of us in our blended family.

Myleene hilarious added: ‘And to be able to walk away with a bum like J-Lo’s… that’s the real reason I’m here, I am going to work so hard!’

Despite her plans for a peachy posterior, the musician also admitted that she is ‘terrified’ of getting her piano fingers ‘rolled over’. 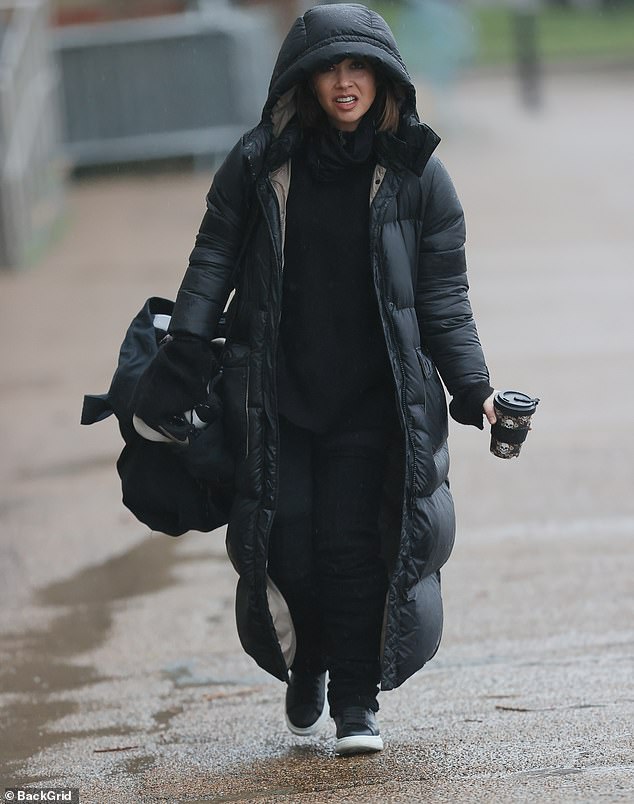 Natural look:Myleene styled her chocolate tresses in a sleek straight bob, and she enhanced her visage with a slick of make-up as she was seen clutching a ceramic coffee mug 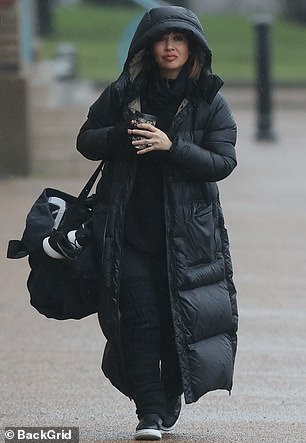 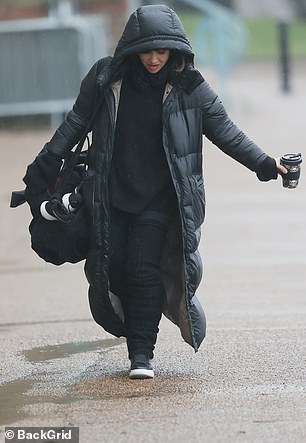 Ready for action: The mother-of-three donned casual footwear and draped a sports bag over her shoulder before entering her training venue

‘By the nature of what it is I feel quite protective over my fingers. As a pianist I have to look after my fingers but I also have to life my life and I love the fact that Im going to walk away with a new skill, new butt and fabulous wardrobe!’

Myleene added that the only other thing she has done as scary, was her stint on I’m A Celebrity in2006. 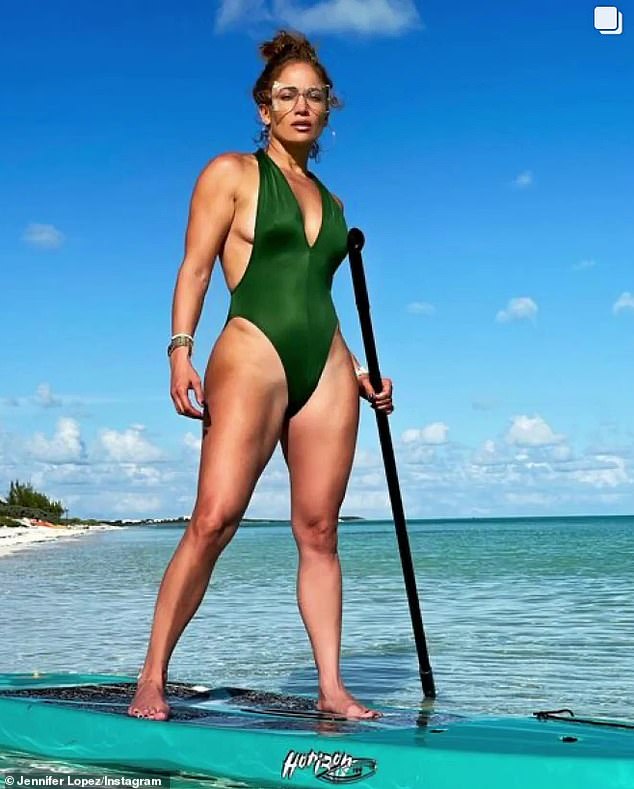 Sensational figure: Jennifer, 51, left fans around the world aghast, as she showed off her incredibly age-defying figure in all its glory during a recent vacation to Turks and Caicos

She said: ‘I did the jungle and I remember when they asked me what my fear was I said dying.

‘I thought if I say rats or spiders or snakes theyre going to land those on my head but it turned out they locked me in a coffin anyway so Ive done that!’

The new series of Dancing On Icewill see the judges protected by perspex screens and no studio audience amid the ongoing COVID-19 pandemic. 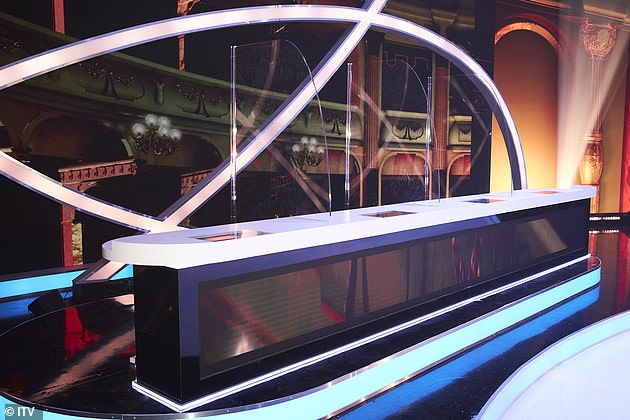 Studio first look:The new series of the ITV skating show will see the judges protected by perspex screens and no studio audience amid the ongoing COVID-19 pandemic

The judging panel will also be sat far apart, keeping in line with social distancing measures.

For the first time in its history the studio at Bovingdon Airfield in Hertfordshire will have no audience, a move mirroring that of Strictly Come Dancing.

The skating celebrities will also watch each other perform from socially-distanced tables to keep everyone safe from COVID-19.

Dancing On Ice 2021: Who are the celebrities?

Myleene says: ‘My girls have always wanted me to do this but I’ve always been too scared someone will skate over my fingers!’

Jason says:‘To be able to learn a skill and spend some time focused is quite exciting, and I’m looking forward to seeing you guys.’

Faye says:‘I’m so excited! The producers get to know you and this is the first time I think people are just going to see me, not being a character Just being me Faye!’

Profession: Former sprint and hurdling athlete, who has since carved out a career as a TV personality

Colin says:‘You go out there, you enjoy yourself and you learn a new skill and to hone the skill of skating will just be a huge, huge plus. I’m looking forward to it.’

Rebekah says:‘I’m really looking forward to getting my teeth into that. I’m going to give my 100% effort for it all.’

Rufus says:‘I’m doing it for the money. I don’t know if you’ve heard but about six months ago this global pandemic hit and made just about everything I’ve ever done to earn a pound note disappear!’

Denise says: ‘I’m really excited. Finally, I get to tell people. I’ve kept this a secret from most of my friends and family. Betsy [her daughter] doesn’t even know….’

Joe-Warren says:‘I’m super excited. I’m glad I have the time off Emmerdale to really focus on training…’

Profession: Former Olympic skier, who is also a TV presenter, adventurer and journalist

Graham says:‘Ice doesn’t scare me, it’s the dancing… [My experience was confined to]’dancing on tables, wearing ski boots in aprs ski. It’s not graceful and elegant!’

Lady says:‘I’m petrified, (but) I’ve always wanted to ice skate so whats better than doing it in front of millions of people.’

Billie says: ‘I am soooo excited to announce that I will be taking part. I still can’t believe I am actually doing it!!’