First eclipse of the year: the Moon will cover 39% of the Sun's surface - NewsWep
Skip to content

“When the Moon comes between the Sun and the Earth, a solar eclipse occurs., but for it to be complete, the Moon’s shadow cone has to touch the Earth, and this is not the case. Since it is the cone of penumbra that touches it, then the disk of the Sun is not completely hidden”, explained the specialist in dialogue with Télam.

The astronomer stated that “the Moon touches the edge of the Sun (17:36) and passes in front of it partially covering it, which could be described as slightly eating the surface of the Sun since the Moon is going to cover 39% of the solar disk”.

García emphasized the need for care for those who want to appreciate the astronomical event and remarked that “you have to use special filters” or see it “by projection or with a camera obscura”. “You have to be careful not to damage your eyesight”he added.

“Even though the Sun is in the west, it is bad to look at it, do not use x-rays, or dark glasses, or blackened glass, or blurred films”, warned the astronomer, adding that a homemade tool that can be used is the strainer: “HYou have to let the sunlight pass and look for the focus on the wall or the floor, where the image is projected”.

García recalled that although partial solar eclipses are not as “convening” as total ones, “this event has become a bit famous because It is accompanied by another one that will happen in two weeks, which will be a total lunar one.”.

Between the night of May 15 and the morning of May 16 (around 1 am) there will be a total lunar eclipsea phenomenon that occurs when the Earth stands between the Sun and the Moon, and produces a shadow cone that obscures the satellite and “does not make it disappear, but it looks red”.

For its part, Cindy Fernandeza specialist from the National Meteorological Service (SMN), assured that “The best place to see the eclipse is the southeast of Patagonia, which will not have cloud cover”. And he remarked that, instead, “For the west of this region, low cloudiness is expected to enter” that can hinder the vision of the phenomenon.

“Another great area to observe the eclipse is the Whose region, including the center of the country and towards the west that will have a clear sky. They will also have several northwestern Argentine provincesbut the eclipse will occur at sunset and the horizon line in this area is very high and it may not be possible to have a good vision, “Fernández specified.

Northern Patagonia will record the entry of “a disturbance” that will cause an increase in cloudiness, and may even occur “light showers” reason why the vision of the phenomenon can be difficult, as in the east Jujuy, Salta, Santiago del Estero, Formosa and north of Santa Fedistricts where it is expected “a lot of low and thick cloud cover”.

Meanwhile, in the City of Buenos Aires and the metropolitan area, it is expected “high cloudiness entering from the north, so it is possible that to the west the eclipse can be observed on the horizon line”. 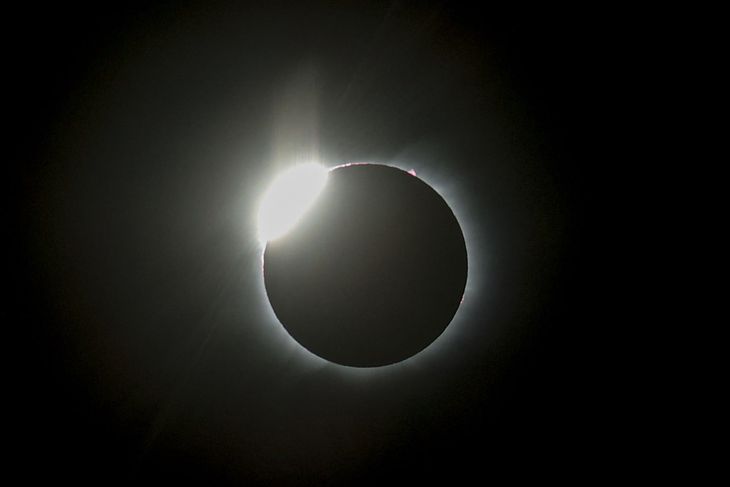 The Trelew Astronomical CenterNext to the Friends of Astronomy Foundationwill hold this Saturday at 5:00 p.m. meeting open to the public in which the eclipse can be observed through telescopes and with the accompaniment of specialists. In addition, the event can be followed live through the YouTube channel of the Latin American Institute of Astrotourism.