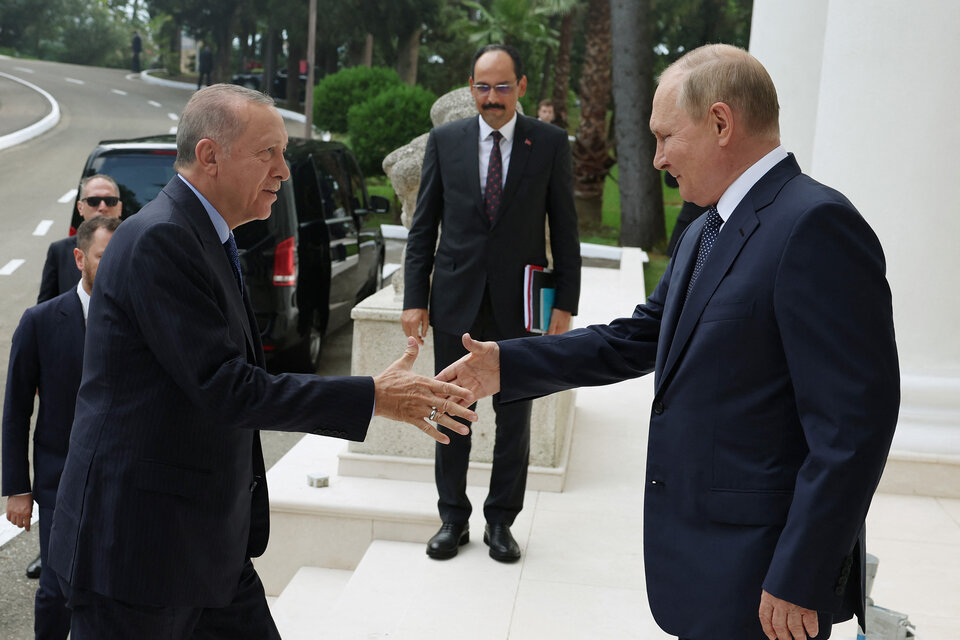 Another game of cards under the table, with the West as Russia’s doormat, has been played in recent days between two contradictory actors: the Russian president, Vladimir Putin, and the Turkish Recep Tayyip Erdogan. Russia, in its confrontation with the West and NATO, invaded Ukraine on February 24, 2022. This did not prevent it from sealing an unprecedented agreement with Turkey, a NATO member country, its main enemy, to unlock 26 thousand tons of corn. It is nothing anecdotal and constitutes a key diplomatic success for Erdogan.

The agreement was signed in Istanbul last week with the mediation of Turkey and the UN and allowed Ukraine to regain access for its ships to the Black Sea under the protection of Turkish frigates. For the first time since the beginning of the Russian invasion, Ukraine was able to take out a shipment of grain from the port of Odessa. Other ports are provided for in the agreement to reach the total of 24 million tons of grain exported. These are the ports of Tchornomorsk and Ioujne.

When the Razoni ship sailed from the port of Odessa, it was, in fact, the first advance in a conflict that had not seen even the remotest hint of a solution. Putin never yielded to any demand, pressure or sanction. He has been the master of the game that he himself armed and activated when he wanted or when the West broke the minimum codes of understanding. Despite being a member of NATO, Moscow considers Turkey a “reliable” interlocutor.

Proof of that trust that the West lost in Moscow, Recep Tayyip Erdogan met this Friday in Sotchi (a Russian city on the Black Sea coast) with Vladimir Putin to talk about “Ukraine and Syria.” It is the second meeting between the two men in the course of the last month. At the same time that Putin and Erdogan shook hands in Sotchi, other grain ships set sail this Friday from Ukrainian ports under Turkish protection.

Neither China, nor the German chancellor, Olaf Scholz, nor the French president Emmanuel Macron are the interlocutors of Vladimir Putin but the head of the Turkish state. The handshakes between the two leaders can be compared to the phase of non-dialogue that Russians and Westerners go through.

Emmanuel Macron and Vladimir Putin have not spoken on the phone for two months and this Friday the Kremlin considered that communications with France “are not necessary because, first, France is an unfriendly state if you look at the actions that France is taking against our country” . Until last May 28, the French head of state was the Western president who, at least officially, maintained more frequent telephone contacts with Putin.

This earned Macron criticism and ridicule because, before and during the war, his meetings and conversations with Putin failed to prevent the war or negotiate humanitarian corridors or other solutions. Relations between the two presidents deteriorated in July after French television broadcast a confidential extract of a conversation between Macron and Putin. Russian Foreign Minister Sergei Lavrov even went so far as to say that it was “a violation of diplomatic etiquette, which does not provide for unilateral leaks of the recordings.” That nine-minute conversation took place before the Russian invasion.

Then the cruelest and most accurate image of the lack of communication between Russians and Westerners was spread: when Macron visited Putin in Moscow on February 7, the Russian president received him from the opposite end of a table as long as a continent (six meters). In fact, he ridiculed him and with a single image he told who was the master at that moment.

Mediator between kyiv and Moscow

Until this second intervention by the Turkish president, no one changed the line drawn by Putin. Turkey is a mediator between kyiv and Moscow and had already managed to get the Russians and Ukrainians to sit around a table with the aim of reaching a ceasefire and establishing humanitarian corridors. That attempt was not successful, but the next one on the export of Ukrainian grain and shipping corridors in the Black Sea enshrined the role of Turkey.

The grain issue was capital not only for the Ukrainian economy but also for world inflation. Before the February 24 invasion Ukraine supplied 10 percent of the world market’s wheat, 16 percent of its corn and about half of its sunflower oil. With the Russian ships stationed in the Black Sea, kyiv, fearing an invasion, filled the sea with sea mines and Russia blocked its ports.

Erdogan’s opportunism lifted blockades and deactivated mines while positioning Turkey as the country that could be the central actor for negotiating an agreement to end the war, or suspend it. Russia supplies Turkey with 45 percent of its gas needs, and through Turkey passes the TurkStream gas pipeline, which also delivers gas in Europe (for now).

The Russian-Turkish understanding is made even above the differences between the two countries, which are serious. In Syria, Russia supports President Bachar al Assad and Erdogan the opposition. Furthermore, for several weeks Erdogan has been threatening to carry out a military operation in Syria to dislodge the Kurdish forces that control the border towns between Syria and Turkey. Ankara’s planned military operation aims to establish a 30-kilometre security zone.

However, it is impossible to carry it out without Russian endorsement. Putin opposed any Turkish military intervention in Syria. But according to Turkish and Western media, his strategic needs could change his position. Moscow would agree to military intervention if Turkey sells it the highly effective Bayraktar-TB2 combat drones, the same ones it has already supplied to Ukraine.

This Friday, in Sotchi, Putin told Erdogan: ”Thanks to your direct participation and the mediation of the UN Secretary General, the problem of Ukrainian grain supplies from Black Sea ports has been resolved. I want to thank you.” Ankara’s next goal is to obtain a truce. It is very likely that Putin will grant Erdogan that privilege and, with it, further humiliate a West that lacked rationality, modesty, tactics and diplomatic intelligence.