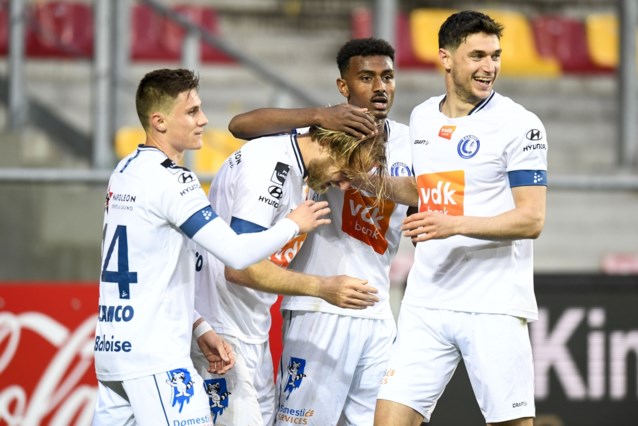 AA Gent fought in Mechelen for over 96 minutes as thoroughbred Buffalos. And in the end the players of Hein Vanhaezebrouck managed to get the victory and the European ticket. And so there will be European football again next season in the Ghelamco Arena. And that is extremely important for captain Vadis Odjidja: “Since I returned, I have played European every year. That is also so important for the appearance of the club! ”

“The relief is of course great”, Odjidja admitted afterwards. “We are above all happy and satisfied that it worked out. Just like in the regular competition, we can enforce it on the last day of play. We can be satisfied with the latter party and also with today. Now are we starting our European campaign on July 22? The season has only just ended. I am not yet working on the following. We will see that again. Now it is vacation ”, the Gentenaar smiled.

Odjidja also realizes that AA Gent has had a very turbulent season, but like a certified diplomat he skilfully dribbled around this theme: “I am a football player for AA Gent and I should not outline the lines. That is up to the people on the board. It has been a difficult season for everyone in the club. Especially in the beginning with a lot of trainer changes. Afterwards, Corona also hit us hard. It was certainly a tough season and in the end we are happy that we have added something or some shine to our season. ”

Ultimately, the relief in the Ghent camp predominated and that feeling also vented a sincere Odjidja: “European football also remains important to me personally. Since I returned, I have played European every year. It is important for the appearance of the club. A lot of boys also came to us to play European. Then it is also nice that we have achieved this. Now we also want to put something there. ”

And despite the victory and the European qualification, the Ghent figurehead realizes that the new season will not be long in coming: “I’m just going to enjoy a holiday but also work a bit. Last summer I was injured in the last practice match and afterwards I struggled a bit. Now I would like to complete a good preparation. At the moment everything is fine. But of course it was a lot of duels in a short time, which is tough for everyone. ”

“No, he is not yet at the end of the contract, you know,” Hein Vanhaezebrouck grinned when the contract status of Roman Bezus came up after the victory in Mechelen. The 30-year-old midfielder will enter his last contract year with AA Gent next summer. And then there is traditionally chatted about the future of the player involved. “I am not a broker. So I will not comment on that, I will only discuss that internally ”, HVH held back, however.

But he was very generous with praise for his Ukrainian midfielder: “We will see if Roman stays. If the player and the club know what I want, that’s enough. He played very good play-offs. Certainly today he was really tough. On Friday he could only train for two minutes. Because against Standard he took a big impact on his neck and back. Because of this he couldn’t train and our doctor told me: don’t count on Roman being able to play. But he indicated that he wanted to try it anyway. Chapeau for that guy. He has shown so much mentality and character. ”

“He was simply the best man at AA Gent today” HVH left no doubt about it. “He consciously scores. That high ball from Andreas (Hanche-Olsen) was actually a flank change, but his header: that was very deliberate because he felt that the goalkeeper came out and that he had to head the ball over Thoelen with a lob. His finish was really good. Chapeau! ”

A dismayed Sandy Walsh gathered his courage to respond on behalf of KV Mechelen, but he could hardly hide his logical disappointment. “We know the story of KV Mechelen this season. If you see how far we come this season, to play for a European ticket on the final day. Losing is never fun, but now the disappointment is very big ”, the defender expressed his feelings.

KV Mechelen did not play a top match and had to acknowledge its superiority in AA Gent, which took the three points via hits from Bezus and Tissoudali. “We never got into our game today, the combinations didn’t work out. The accumulation of matches, the fact that we played with a new formation … Fitting in new guys is never easy. Too bad, because we know how much we can hurt them normally. However, we had to play in a different way, so it was not possible to win a draw or win. ”

When asked whether he looks back with some pride on the past season, Walsh is brief. “We can be proud of what we have achieved this season, but at the moment disappointment dominates.

Just like his players, Wouter Vrancken was of course disappointed with the missed European ticket, although he started to congratulate his colleague Hein Vanhaezebrouck. “Congratulations to my colleague for the European ticket,” he said. “I follow him in his analysis. In the first half we gave away too much. We also suffered too often loss of ball in the switching times. In the second half we did better and there was more stability. Too bad about the goals against. ”

Incidentally, Vrancken thought, just like Vanlerberghe, that Bezus should have received red for kicking afterwards. “For me this is always red. His reaction afterwards of ‘I didn’t do anything’ says it all. He knew he had done something. ”

Despite the missed European ticket, there was also great pride about what his team has achieved this season. “I am proud of the guests,” he concluded. “Not only about their entire season, but also about their match against a strong opponent today. They kept fighting to the last second. The disappointment in the dressing room afterwards was very great. This shows how professional they are with their profession and how well they are connected. We should try to flush out the disappointment by bringing out the good of this season. That must predominate over the lesser. “