A reporter broke down in tears on air as she slammed the cruel border closure that kept a dying toddler from being with his family during his last days.

Three-year-old Thomas Collins died in a Melbourne hospital on Saturday, where he had spent more than a year receiving specialist treatment for an immune system problem that meant the smallest germ could make him dangerously ill.

His heartbroken parents, Leah and Morgan Collins from Ipswich, were desperate to fly him home to Queensland so the whole family could be together when he died after recent brain surgery left him in an unrecoverable coma.

Doctors approved his journey home but the Queensland Government failed to act in time, sparking public outrage on social media. 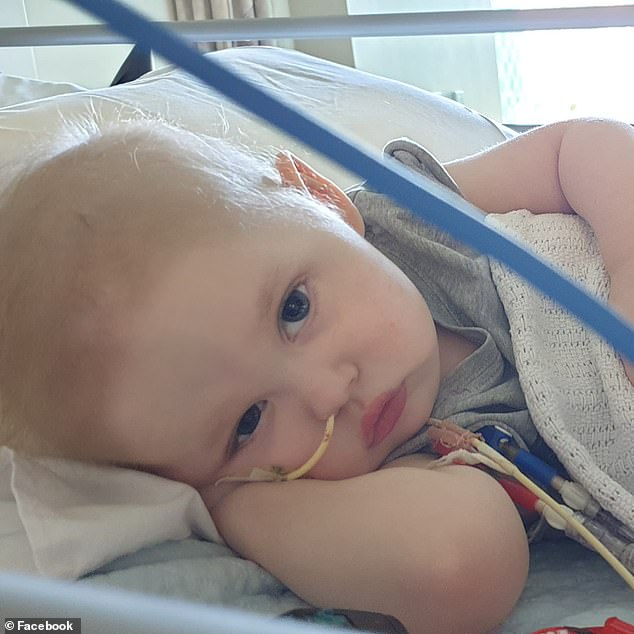 Sydney Morning Herald reporter Jessica Irvine said the case left her ‘heartbroken’ as she blasted the hard border closures on the Today Show on Monday.

‘No real mercy was shown by the Queensland government when the family did request to come back,’ she said.

‘I mean, it is again this hard line sort of policies that we have got that. We sort of understand the reason for but these are the really human stories that get caught up and it just breaks my heart.

‘I just send them all my best wishes. It is a very, very difficult consequence of the times that we are living in.’ 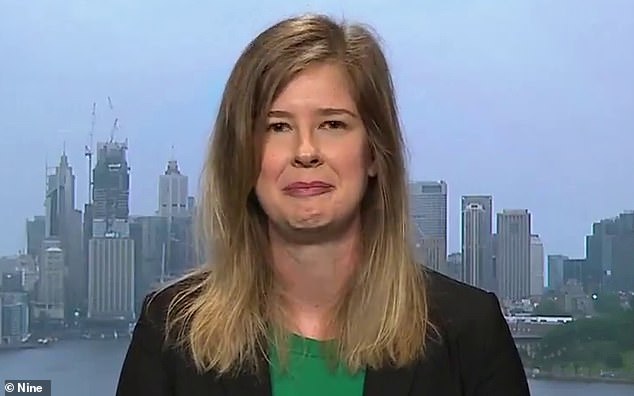 The young family relocated to Victoria prior to the pandemic so Thomas could receive specialist treatment.

Ms Collins, 32, said they tried everything to get home but coronavirus border restrictions prevented them flying to Queensland without two weeks’ quarantine – even though Victorian immunologists were willing to certify them Covid-safe.

The family must now wait for the Queensland border to open so they can hold his funeral.

This prevented him from fighting off germs – the slightest infection would make him dangerously ill, with a stem-cell transplant the only possible cure.

Thomas spent 858 days in hospital and did receive a bone marrow transplant. 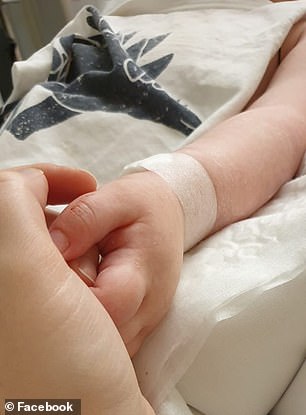 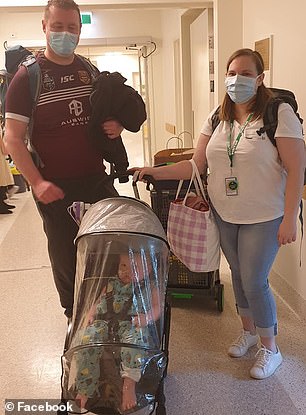 Leah and Morgan Collins (pictured right) taking their only child Tom out in his stroller. Tom had to be protected from all germs due to a rare condition disabling his immune system

Sadly a few weeks ago he developed an infection that needed brain surgery, which left him in an induced coma.

As time passed it became clear he would not recover.

‘It is with deepest sorrow and fractured hearts that we tell you of Thomas’s passing this evening,’ the Collins wrote on Saturday.

‘He passed peacefully in the arms of his parents.’

Ms Collins said they hadn’t heard anything back from Queensland Health despite begging to be allowed into the state to spend their precious final moments with Thomas surrounded by family.

She said they could have flown back to Queensland without an exemption but Tom would have died in quarantine, leaving the pair trapped in a hotel room with no support for the rest of the two-week isolation period.

‘We’d have had to stay (for two weeks’ quarantine) in the room where he died unable to go out for a walk or anything,’ she told Daily Mail Australia on Sunday. 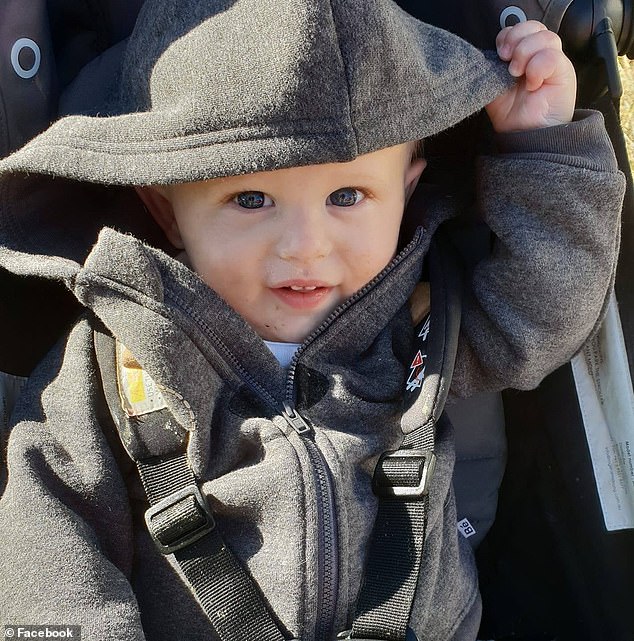 Thomas was being treated in a Melbourne hospital, far from his Queensland home 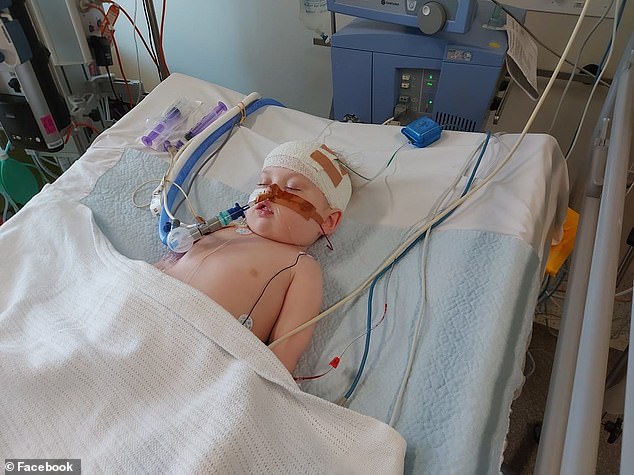 Thomas contracted one last infection that meant he had to have brain surgery, but tragically he wasn’t able to recover from this last operation

Daily Mail Australia understands that Queensland Health offered to help with emergency transport, but is not aware of why there was no exemption from quarantine on compassionate grounds.

‘We extend our deepest condolences to the Collins family at this difficult time,’ said a Queensland Health spokesperson on Sunday night.

Severe combined immunodeficiency disease (SCID) is an inherited disorder, caused by a mutation in groups of genes responsible for fighting off infection.

It causes the white blood cells that fight off infection – the T-cells and the B-cells – to malfunction.

Infants with SCID usually have no T-cells in their blood, so even if they have B-cells they cannot make antibodies to fight infection without the T-cells.

Once the antibodies they get from their mother are gone, they have no defence against infection.

Most infants are diagnosed in their first year of life and need a haematopoietic stem cell transplant to survive.

‘Queensland Health has and will continue to offer every assistance possible to the family.’

Leah’s mother was able to make it down to Melbourne to support her daughter through her only child’s death.

Her father tried desperately to reach his daughter in time from the Sunshine Coast but wasn’t able to make it.

‘Our whole family has been fractured, separated,’ Ms Collins said.

The couple, are at the end of their emotional and financial reserves, having been through years unable to work, staying in hospital to care for Thomas.

They have a GoFundMe page that had been set up to try to help with the expense of getting Thomas home to die, but is now to help with funeral costs.

Leah and Morgan Collins now want to get home to Ipswich as soon as they can to hold their little boy’s funeral with their family at their side.

‘Our emotional bandwidth is completely depleted by trying to work through the bureaucracy, and we face another two-week quarantine when we get back to Queensland,’ she said.

Ms Collins said they were supportive of the coronavirus restrictions as they were what kept their ‘little fellow’ safe.

But they had asked for an exemption on compassionate grounds, were certified covid-free and yet were still refused, despite being Queensland residents.

Daily Mail Australia has also asked Queensland Premier Annastacia Palaszczuk’s office for comment on why the Collins family could not previously be exempted from quarantine on compassionate grounds.

Queensland’s border restrictions have now been eased and anyone can enter the state without quarantine if they have not been in a coronavirus hotspot in the 14 days before their arrival.

Hotspots still include the entirety of Victoria and the 32 local government areas that make up Greater Sydney, ABC News reported on Saturday.

Thomas in the arms of his mother, Leah Collins. Leah tried desperately to help her son