The ‘St Kilda schoolgirl’ at the centre of one of the biggest scandals in AFL history 10 years ago has thanked her online followers for making her ‘feel like a warrior’ as she battles a rare tumour.

Surgeons identified the unrelated tumour during the surgery at the end of 2020.

But the 27-year-old mother of one has remained upbeat about the devastating double blow, posting images of her latest hospital stay to Instagram. 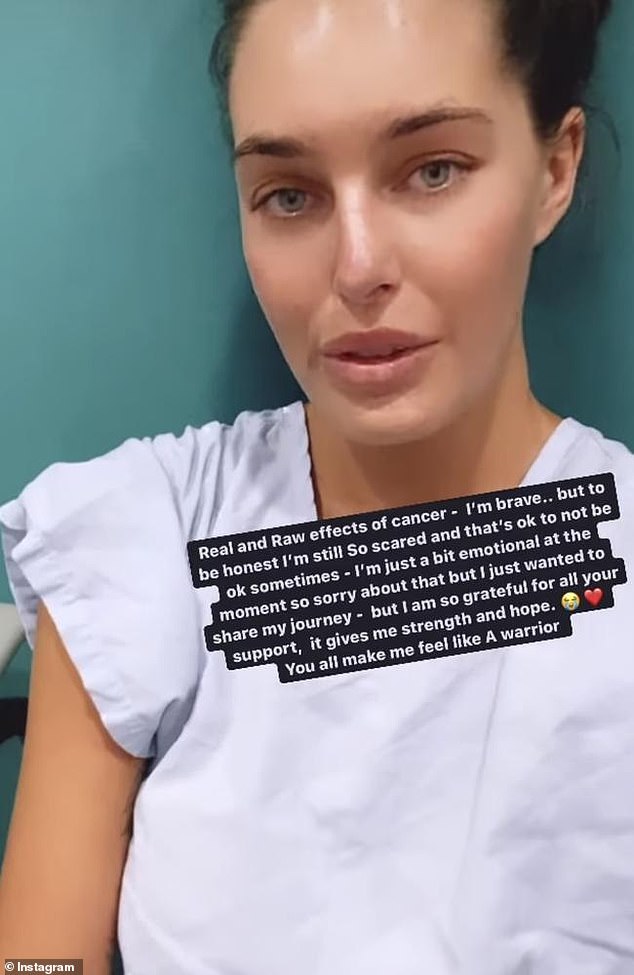 The ‘St Kilda schoolgirl’ (pictured Kimberley Ametoglou) at the centre of one of the biggest scandals in AFL history 10 years ago has thanked her online followers for making her ‘feel like a warrior’ as she battles a rare tumor. 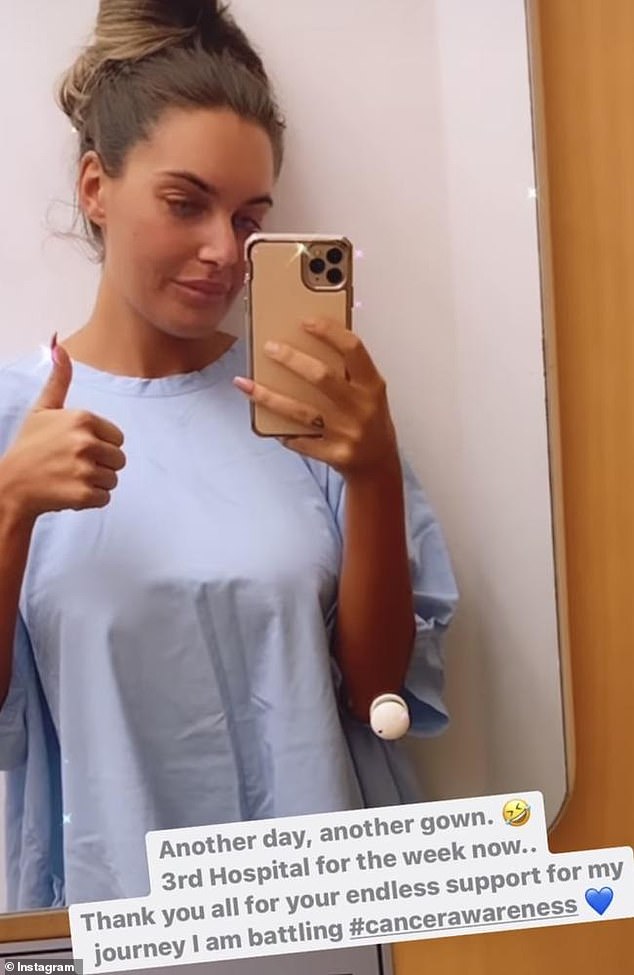 The 27-year-old mother of one (pictured) has remained upbeat about the devastating double blow, posting images of her latest hospital stay to Instagram

‘Real and raw effects of cancer – I’m brave – but to be honest I’m still so scared and that’s okay to not be okay sometimes,’ she said to her 63,000 followers.

‘I’m just a bit emotional at the moment so sorry about that but I just wanted to share my journey.

‘I am so grateful for all your support, it gives me strength and hope. You all make me feel like a warrior.’

MsAmetoglou has been sharing her ongoing struggle with the cruel disease on social media to raise awareness about what sufferers go through.

‘Another day, another gown. Third hospital for the week now,’ she posted on Tuesday.

‘Thank you for all your endless support for my journey I am battling.

‘Staying positive despite my whole vein just being blown… meaning they can no longer use that arm for treatment anymore… it’s painful and bad luck but it’s okay.’ 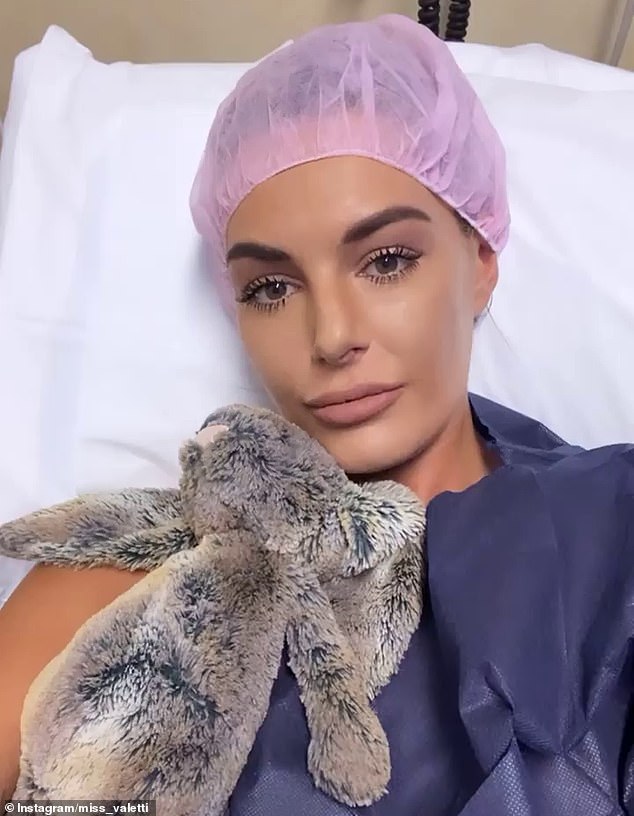 Kimberley Ametoglou (nee Duthie), posted news to her Instagram account announcing she has been diagnosed with a ‘rare’ and ‘unrelated’ tumour found during surgery on her cervical cancer 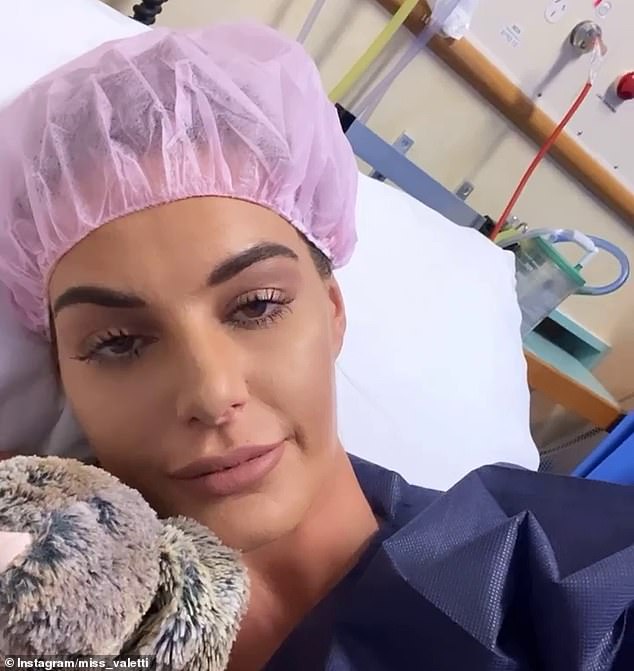 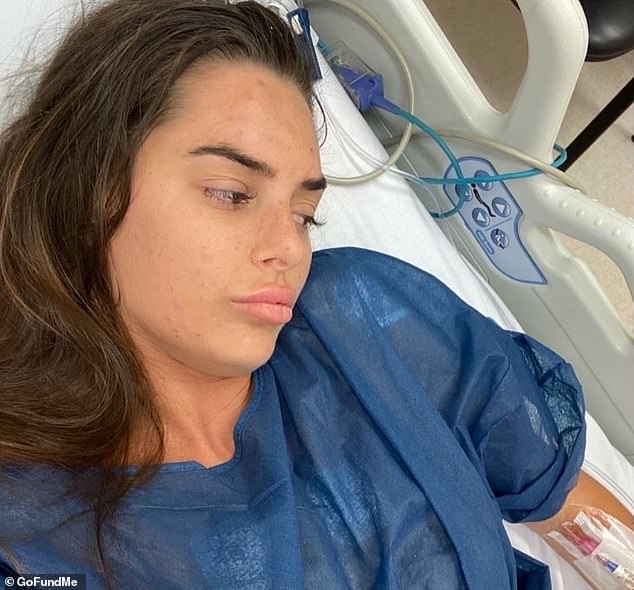 MsAmetoglou (nee Duthie), revealed she would be undergoing a ‘major surgery’ for cervical cancer in 2020

In 2010, scandal engulfed the St Kilda Football Club and clients of player manager Ricky Nixon when Ms Ametoglou released nude photos of some of the side’s biggest stars.

She also posted a photo of a semi-naked Nixon in a hotel room which was taken when she was aged 17.

At the time she said she felt disrespected, hurt and isolated by players. She later admitted the scandal was ‘one of the biggest mistakes of my life’.

Last month, the expiry of non-disclosure agreements Ms Ametoglou signed meant she could finally reveal her experiences in a book she planned to write.

‘Finally speaking my truth,’ she recently wrote on Instagram. 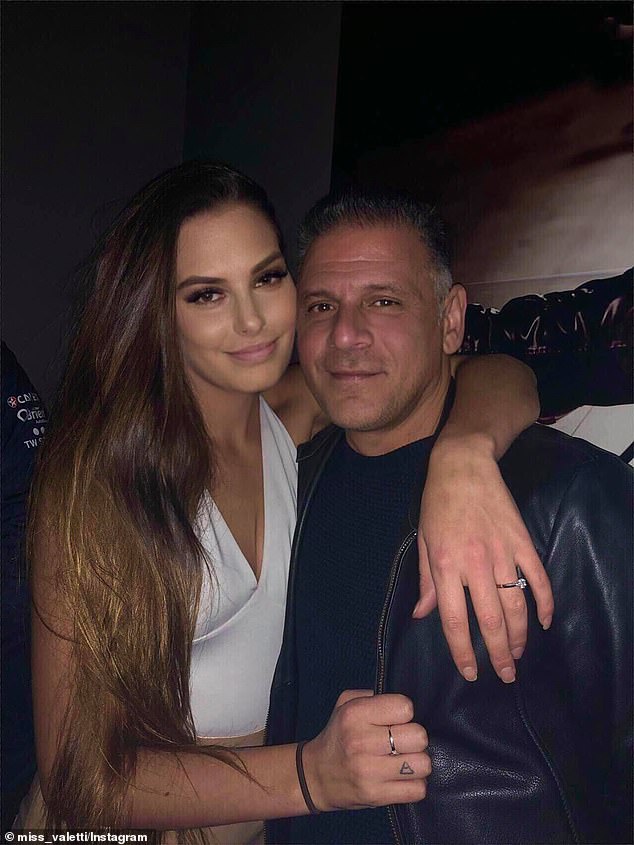 Kimberley Ametoglou (left) with her husband, Demirel Ametoglou, (right) who is 27 years her senior 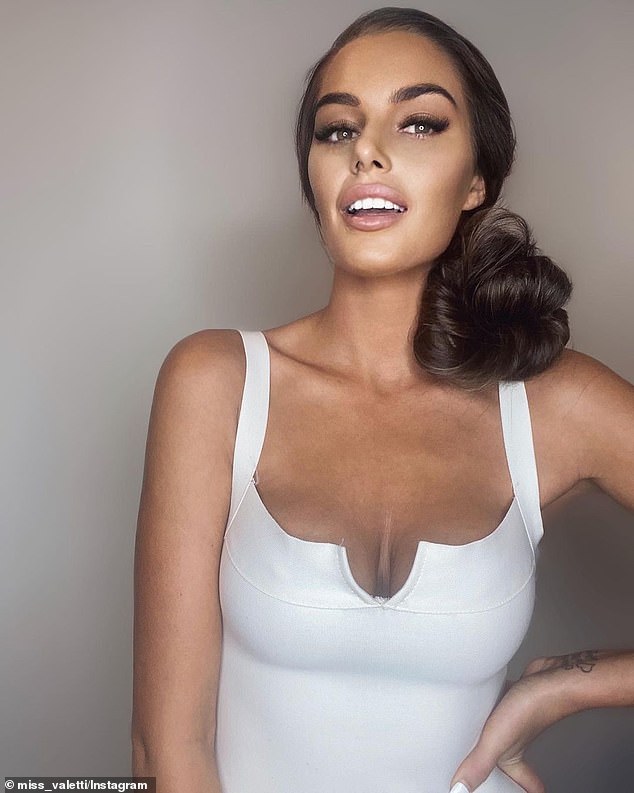 ‘Overwhelmed with interest in my book from last night’s sneak peak story. This is one of the most challenging things I have ever done, reminiscing on past traumas and a time in my life that I was at absolute rock bottom.

‘I wanted to be able to share what I couldn’t say 10 years ago during many TV interviews.’

She warned her followers to expect graphic content in the new book as she wanted to be ‘transparent’ with her readers.

‘NDA contracts have finally expired now it’s 2021 and it’s my chance to finally close a chapter,’ she said.

‘This is my story So I can finally recover and gain closure.’

Since news of her book plans was released,Ametoglou announced she was preparing to reunite with her strip club owner husband, Demirel, after 14 months apart. 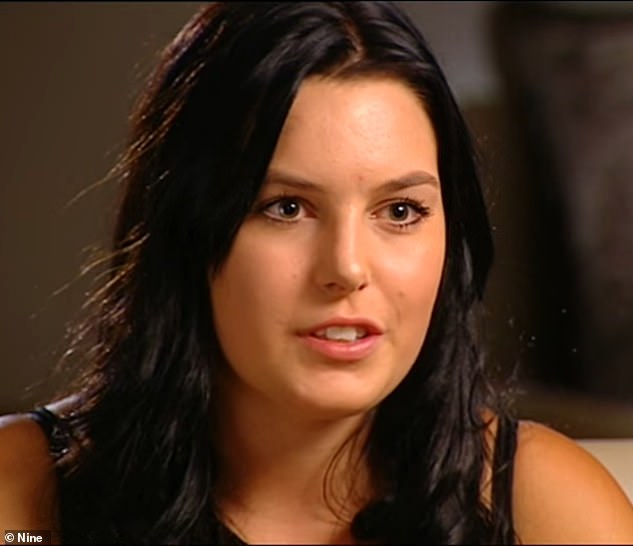 Ms Ametoglou (nee Duthie) pictured during a 60 Minutes interview in 2011.’I wanted to be able to share what I couldn’t say 10 years ago during many TV interviews’ 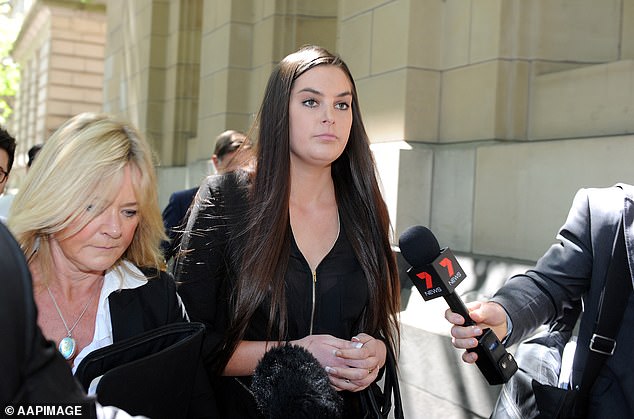 When MsAmetoglou (nee Duthie) was 17 years old, she became embroiled in a hotel scandal with AFL player manager Ricky Nixon

Demirel is 27 years her senior and the father to her four-year-old son Zac.

‘We FaceTime every single day for probably like four, five hours a day. [We] speak on the phone all day,’ she revealed in a video on her Instagram Stories.

The pair were apart for more than a year after Mr Ametoglou was forced to stay in Melbourne due to strict Covid restrictions and work commitments.

The businessman regularly gushes about his ‘Queenie’ on social media, and recently paid for her and their son to go on a private getaway while he stayed in Melbourne.

‘My Queenie and Prince deserve the best! I hope you both enjoy a beautiful & much needed relaxing time. Love and miss you both so much,’ he wrote in October. 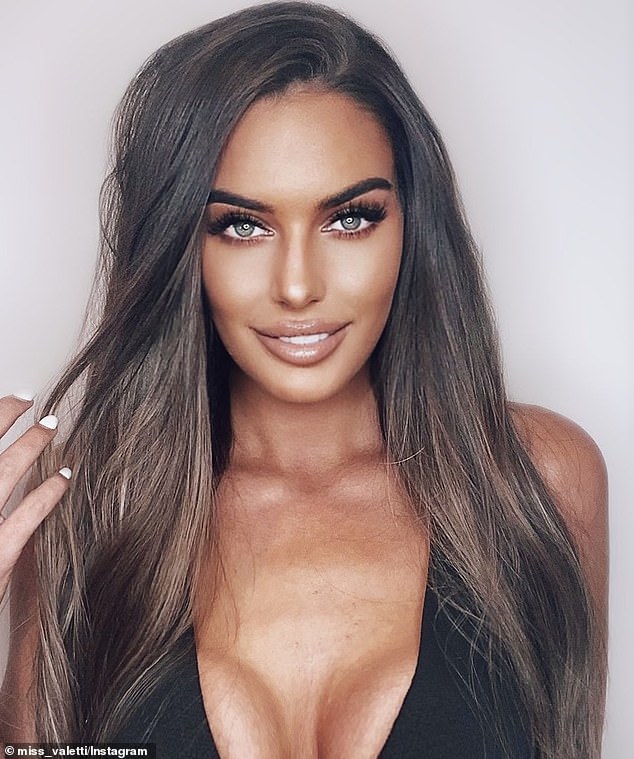 MsAmetoglou said due to Covid restrictions and her husband’s work commitments, he had been in Melbourne for the past 14 months

‘That’s a massive thing for me, but hopefully that will mean that I’ll be in full remission,’ she said.

‘I’m still taking oral chemotherapy but I’ve stopped taking my IV. So hopefully after some radiation and this operation I should be in remission.

‘Other than that I’m doing really well mentally and I’ve found really good coping mechanisms to deal with my cancer.’

Ms Ametoglou has also claimed she works 80-hour weeks as a ‘full-time crypto trader, full-time mother, full-time university student and full-time wife,’ as well as dabbling in accountancy and marketing. 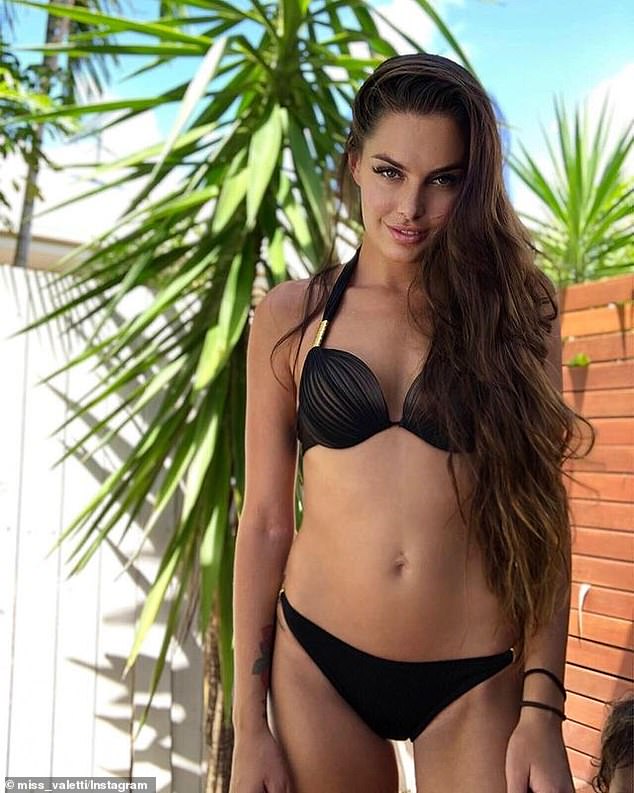