Eight quarterbacks have their sights on the Super Bowl. For some, this season is a last throw of the dice. For others, this could be the start of something.

As Patrick Mahomes dusts off his cleats for the first time in three weeks, the Chiefs are three wins away from becoming the first team to retain the title since the Patriots in 2005. Their quarterback? Tom Brady, who at 43 is back in the playoffs for an 18th time.

Now playing in the NFC, where the average age of the four remaining quarterbacks is 37, a mean brought down significantly by 26-year-old Jared Goff. 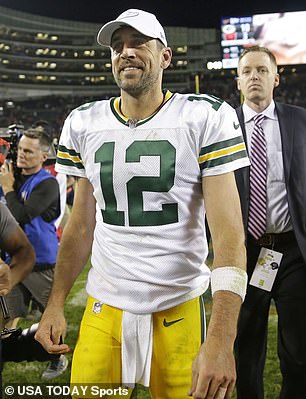 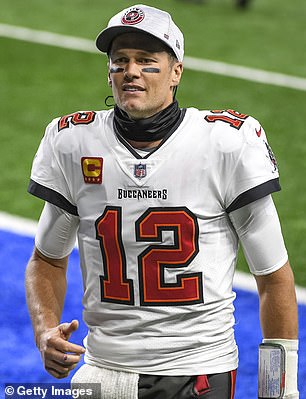 Each has appeared in the Super Bowl, but if you discount Brady’s bumper haul of six titles, they have only won two between them. For Aaron Rodgers and Drew Brees, that’s simply not enough.

In the AFC, all four quarterbacks were drafted in the first round. The oldest is 25-year-old Baker Mayfield.

A few months younger than Mayfield, Mahomes already has a Super Bowl win, a Super Bowl MVP and an MVP to his name. Lamar Jackson is reproducing the kind of form which saw him named reigning MVP and Josh Allen is in the conversation this year, such has been his form in Buffalo. 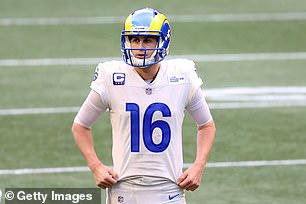 Jared Goff only played in Seattle because John Wolford was hospitalised by a cheap shot from Jamal Adams.

Yes, Goff’s surgically repaired right thumb – he had three screws inserted on December 28 – is a cause for concern, but more so is being benched in the playoffs for a back-up with one NFL game under his belt.

Goff is said to be mightily annoyed at the snub. While there were some wobbles, he played with a chip on his shoulder, leaning on Cam Akers and the NFL’s No 1 overall defense.

Crucially, he didn’t turn over the ball in the Rams’ first game without a giveaway all season. But will he start in Green Bay? Sean McVay wasn’t letting anything slip.

This is not the position Goff, the No 1 overall pick of the 2016 Draft, would have pictured after helping the Rams to Super Bowl LIII.

Sadly, once there the New England Patriots laid his limitations bare and the rest have followed the blueprint since.

The Rams are tied to Goff until the end of the 2024 season after he signed an extension in 2019 worth $134million, with an almighty $110m guaranteed.

And if McVay decides to roll with Wolford again – either this weekend or sometime soon Goff will have his work cut out to prove the doubters wrong. 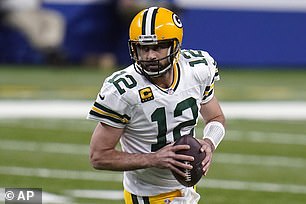 There is another Cal product waiting in frozen Green Bay, where Aaron Rodgers is 4-2 in the playoffs.

But at 37, he’s won one Super Bowl, a paltry return for a man of his talents.

And as he stands on the cusp of the third MVP title, is Rodgers poised to lift a long-overdue second Lombardi trophy?

Only 12 men have won multiple titles.

And with the NFC going through Green Bay, with Rodgers dictating the NFL’s No 1 scoring offense and his telepathic relationship with Davante Adams, he knows there won’t be too many more chances like this one.

‘Obviously I would love to win one,’ he said.

‘It’s been a long time. There’s been a lot of ball between now and February 6th, 2011, which was a beautiful day. It’s important to all of us.’

In the second year under Matt LeFleur, Rodgers says Green Bay are more complete than last year, where they were annihilated by the 49ers in the NFC Championship.

‘I feel like we have a lot of confidence and believe in ourselves. Offensively, we’re just a better, much more efficient team and playing with a lot more confidence.’

At the start of the season, all the talk was about possible retirement and the Packers’ succession plan after drafting Jordan Love.

But it would be typical of Rodgers to steal the headlines come February 7. 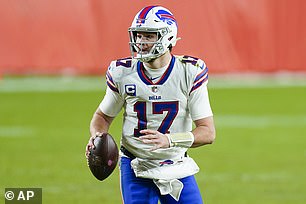 For the first time since the Jim Kelly era, the Buffalo Bills have a franchise quarterback.

Josh Allen led Buffalo to their first AFC East title – and then a first playoff win – since the 1995 season.

In doing so, his 37 touchdown passes surpassed Kelly’s regular season record (33) from 1991.

With 4,544 yards, 37 touchdowns and just 10 interceptions on the season, Allen’s deep ball threat and chemistry with Stefon Diggs have turned the Bills from a playoff team to a Super Bowl contender.

Happy inside or outside the pocket, with a rocket arm and a solid ground game built on a willingness to put his body on the line, his progression has been nothing short of remarkable.

But for the form of Rodgers and Mahomes, third-year quarterback Allen would be MVP.

The seventh overall pick in 2018, he faced up to and learnt from some tweets with racist language which surfaced immediately prior to the draft.

Saying he was ‘young and dumb’, Allen was the third quarterback off the board, behind No 1 overall pick Baker Mayfield and No 3 Sam Darnold.

He was impressive in his first playoff win, going 26 for 35 for 324 yards with two touchdowns and no interceptions. He was also Buffalo’s leading rusher with 54 yards.

‘It’s the playoffs, man. I’m just trying to do whatever I can to help this team win football games,’ Allen said.

Buffalo’s future is in good hands. 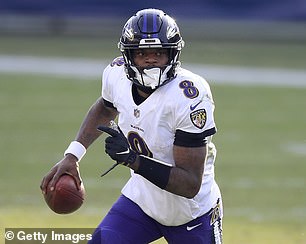 The reigning MVP exorcised his playoff demons during a gutsy come-from-behind win over the Ravens’ 2020 nemesis Tennessee.

After overcoming an early interception, Jackson was at his free-flowing best, rushing for 136 yards and a brilliant 48-yard touchdown while throwing for a further 179.

Since Jackson returned from Covid in November, the Ravens are on a six-game tear.

Much of that is due to the quarterback, who has completed over two-thirds of his passes, throwing for 988 yards and 11 touchdowns.

With a first playoff win in three attempts under his belt, Jackson is free to concentrate on what he does best: dodging pressure, extending plays and electric, thrilling runs.

On his return to the form of his life, Jackson said: ‘Just my mindset; I’m just attacking the game more, being more aggressive.

‘I’ll say, in the beginning of the season, I was conservative a lot; just staying back and getting sacked a lot more. But as the season went on, [when] things break down, my first read is not there, second read is not there, I take advantage of what the defense gives me. That’s pretty much the biggest thing.’

And with a 50 per cent chance of snow in Buffalo, his skills on the ground will be even more vital for Baltimore. But it will be a new experience for Jackson if it does.

‘Yeah, that definitely will be my first time playing football in the snow Saturday. If it does. Hopefully it don’t.’ 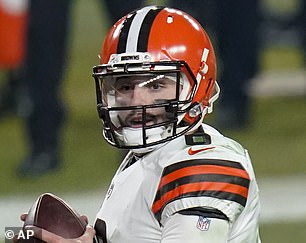 Baker Mayfield, the 2018 No 1 draft pick, has led the Cleveland Browns to a divisional clash against the Kansas City Chiefs

The No 1 overall pick of the 2018 draft has already cemented hero status in Cleveland.

After a rocky first year and only a marginally better second season, the arrival of first-year head coach Kevin Stefanski transformed the future of the franchise.

At 25, Mayfield is the oldest starting quarterback remaining in the AFC after helping the Browns into the postseason and the elysium of a postseason win, a first since Bill Belichick was head coach in 1995.

With running backs Nick Chubb and Kareem Hunt powering Cleveland’s offense, Mayfield has overcome an uneven start to put in some highlight-reel performances.

He threw four touchdowns in the first half in a 41-35 win over the Titans in December to put the Browns within touching distance of the postseason, and his performance in Pittsburgh he threw for 263 yards and three touchdowns was marked by some high-pressure throws. 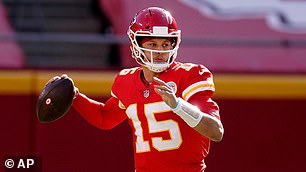 During those nine defeats he scored over 30 points six times and in each of his five playoff games, the Chiefs have scored at least 31 points.

And let’s not forget that his only playoff defeat an overtime defeat by the New England Patriots in the 2018 AFC Championship Game – was settled by the toss of a coin.

It’s little wonder that the Chiefs signed Mahomes to a 10-year, $503m deal.

As the face of the NFL, Mahomes is famed for his outrageous non-look throws as he is for his late comebacks and game-winning drives – eight and counting.

Named MVP for the 2018 season after becoming the third quarterback to throw for 50 touchdowns a season (after Brady and Peyton Manning), the next season he became the youngest ever quarterback to win Super Bowl MVP.

And when he dislocated his right knee in week six of that season, he only missed two games, returning to lead Kansas City on a seven-game tear which culminated with that comeback in Miami.

Mahomes is a generational talent. And if the Chiefs retain the Super Bowl, all the talk will be on them becoming the first team to win it three times in a row. 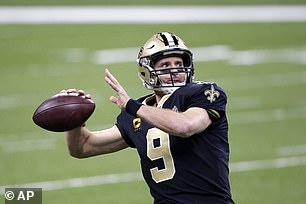 Drew Brees has not confirmed his retirement, but it is widely rumoured that he is heading to NBC’s commentary box next season.

With a raft of passing records under his belt – he has thrown for more yards than any quarterback in the regular season with 80,358 and ranks second in touchdown passes with 571 Brees will be desperate to reach a second Super Bowl.

Forever a hero in New Orleans for that victory 11 years ago, tainted though it very well may be, for the current Saints crop this represents one final push given their impending cap space chaos.

One of the best pure passers of any generation, the combination of Brees and head coach Sean Payton has been irresistible at times.

Incredibly durable, Brees has only missed 11 games in his 20-year NFL career – and nine in the last two seasons.

Currently recovering from anything between five and 11 broken ribs and a punctured lung, he will be protected by a suit made of ballistic armour.

And while he turns 42 on Friday, Saints head coach Payton is planning a special gift. 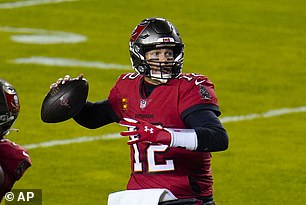 And then there is the oldest and greatest of them all.

Tom Brady left Bill Belichick behind in New England and is in the playoffs again.

Brady says he wants to play until he’s 45, so there is no immediate hurry to add to his record Super Bowl haul.

Now in his 20th season, he set franchise records galore for the Bucs and made his 299th start a record for a quarterback in week 17.

Now looking more at ease in Tampa Bay’s offense and with the emergence of Antonio Brown, Brady will feel he can get one over Brees.

They meet for the third time this season. The Saints won both in the NFC South by a combined score of 72-26 with Brady roughed up, the Saints sacking him six times and picking him off five times.

Yet no team has ever beaten Brady three times in a single season.

Brees has the edge over their head-to-head meetings, winning four of seven, and their combined age will be 85, a fact not missed by Brady.

And if Tampa Bay win in the Divisional Round for the first time since their Super Bowl winning year of 2003, few know how to handle the situation better than Brady.

‘You’d love to play great every game. I think it’s good to win and advance,’ he said.