Parts of northern England and Scotland woke up to heavy snowfall this morning with more wintry weather now forecast for the weekend and into next week as temperatures plunge as low as -12C (10F).

An amber weather warning covering parts of eastern Scotland, County Durham and Northumberland is in force until the mid-morning today, amid fears of a second ‘Beast from the East’ this winter in the coming weeks.

Up to a foot (30cm) of snow is expected on high ground today with overnight temperatures falling to -7C (19F) in eastern England and the wind chill making it feel even colder, while parts of Scotland could plunge to -12C (10F).

Snow and ice is predicted through today down the length of the Pennines as far south as the Peak District, in Cumbria and the North York Moors, where a lesser, yellow weather warning applies until 9pm tonight.

The rest of England will see heavy rainfall, particularly in London and the South East, while Wales and Northern Ireland will stay mostly dry. Tomorrow will bring a foggy start with most areas becoming dry and bright later. 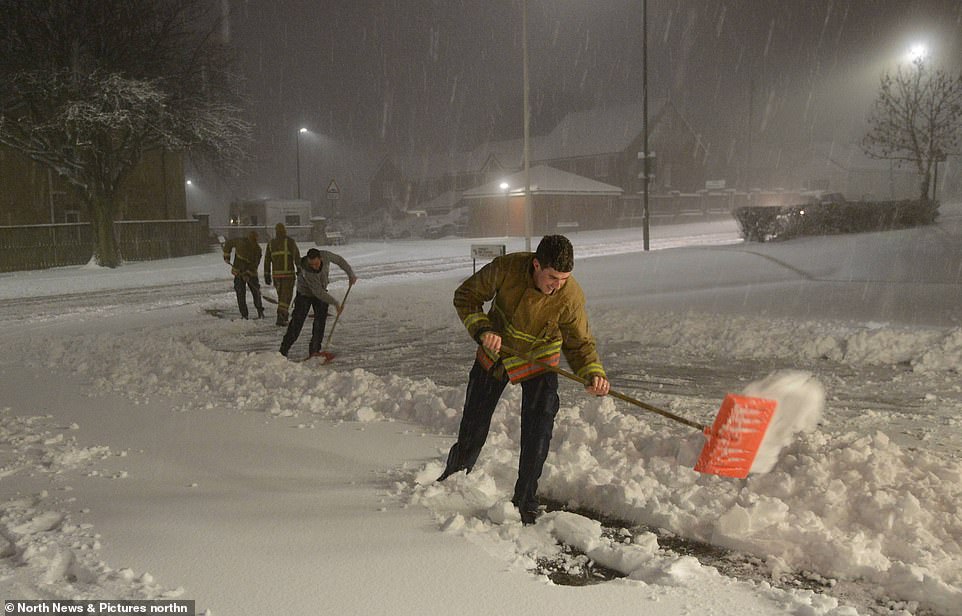 Firemen from Consett Fire Station dig themselves a path out the building in Consett, County Durham, today after heavy snow 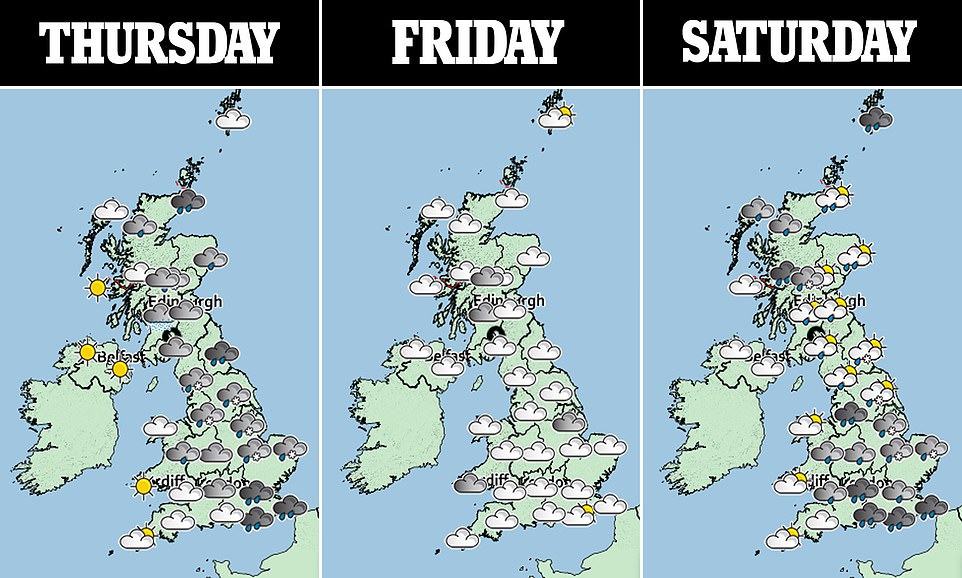 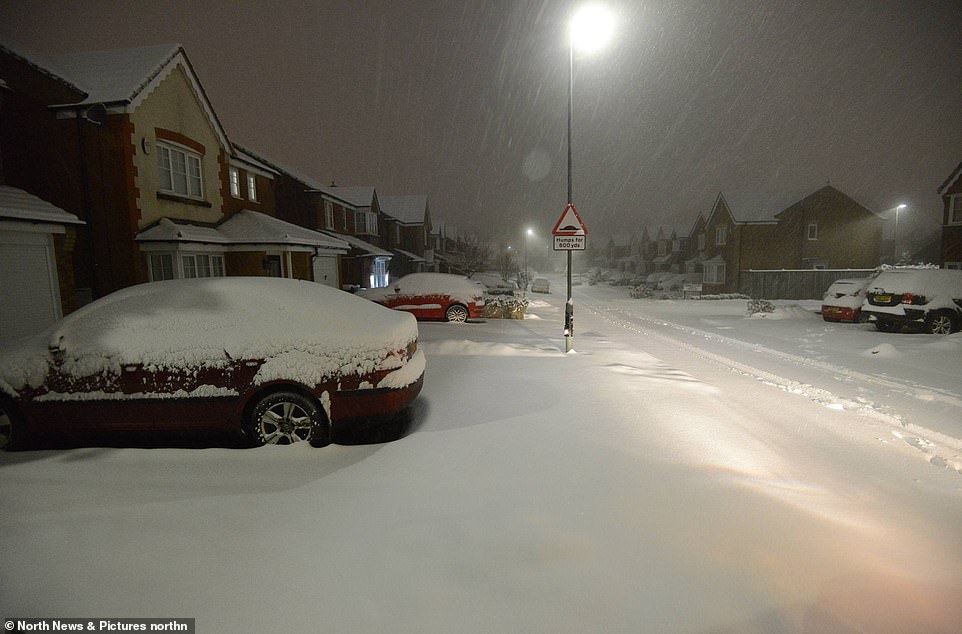 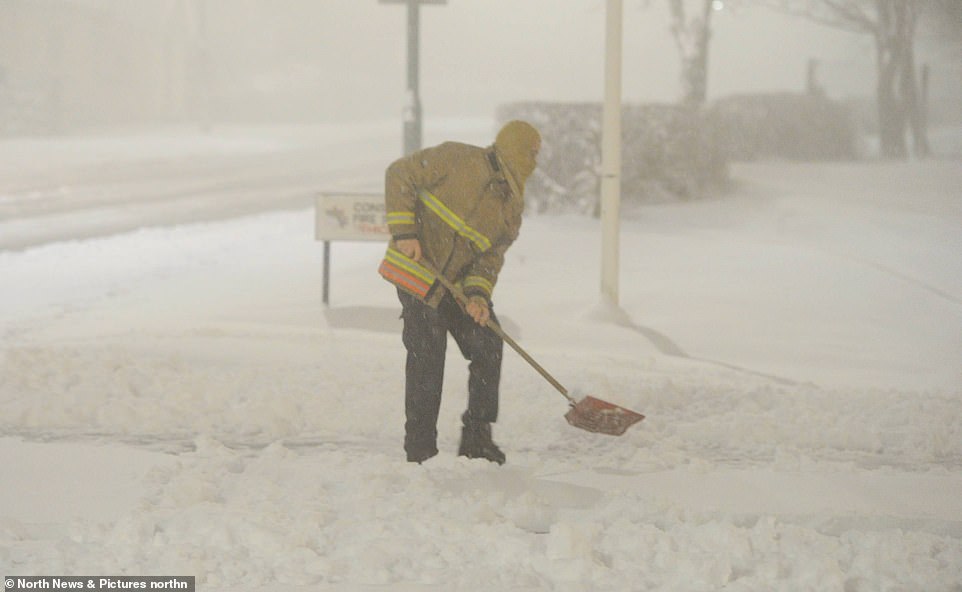 In Scotland, families were urged to stay indoors amid a countrywide white-out. Police asked drivers not to travel unless essential and the Government advised those who are on the move to pack warm clothes and food supplies.

The Met Office said that there is ‘no doubt’ there will be travel disruption in Scotland amid concern for motorists on motorways including the M8, M9, M90 and M74, which lie at the heart of the amber warning area.

Areas such as the Highlands, Grampian, Tayside, Central, Fife, the Lothians, Strathclyde, Dumfries and Galloway and the Scottish Borders are set for even more severe blizzards.

Oliver Claydon of the Met Office said: ‘These are significant accumulations of snow we are predicting. There is no question we will see travel disruption, particularly on higher routes.’

Local authorities deployed their fleets of gritters in anticipation of the snowfall. Cabinet Secretary for Transport Michael Matheson said: ‘The Met Office is telling us to expect a period of challenging weather.

‘The conditions will likely cause difficult driving conditions and disruption to the wider transport network, so it’s important that anyone that has to make an essential journey during the warning period plans their journey. 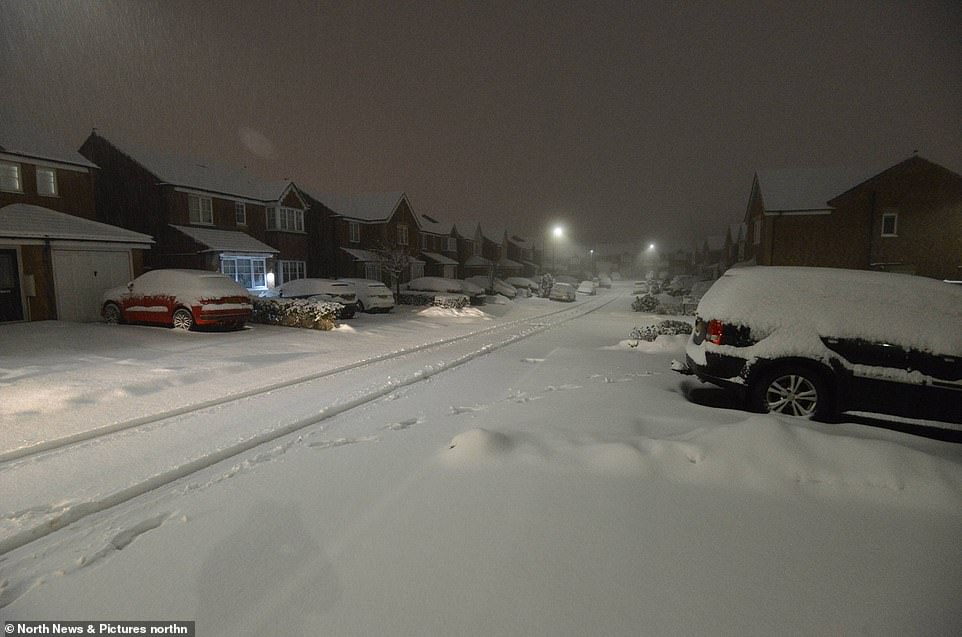 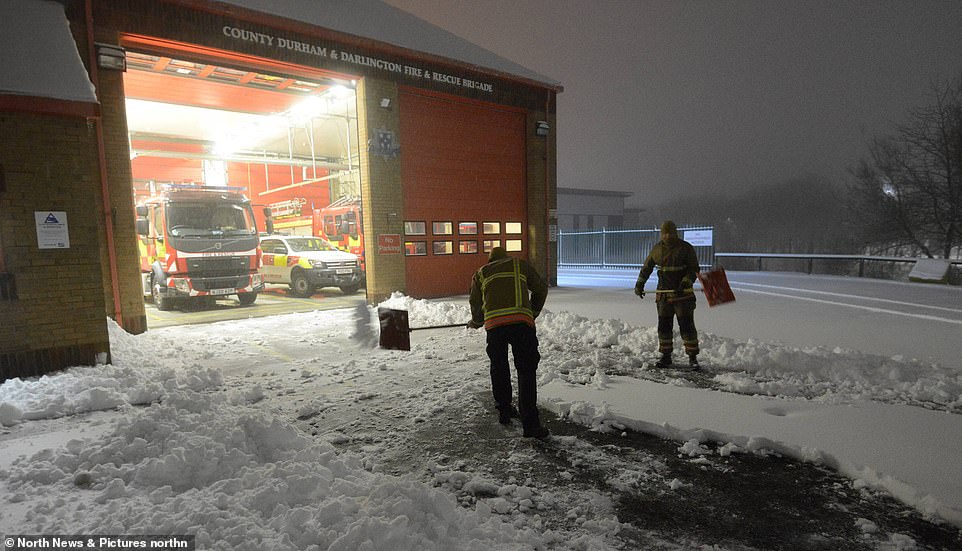 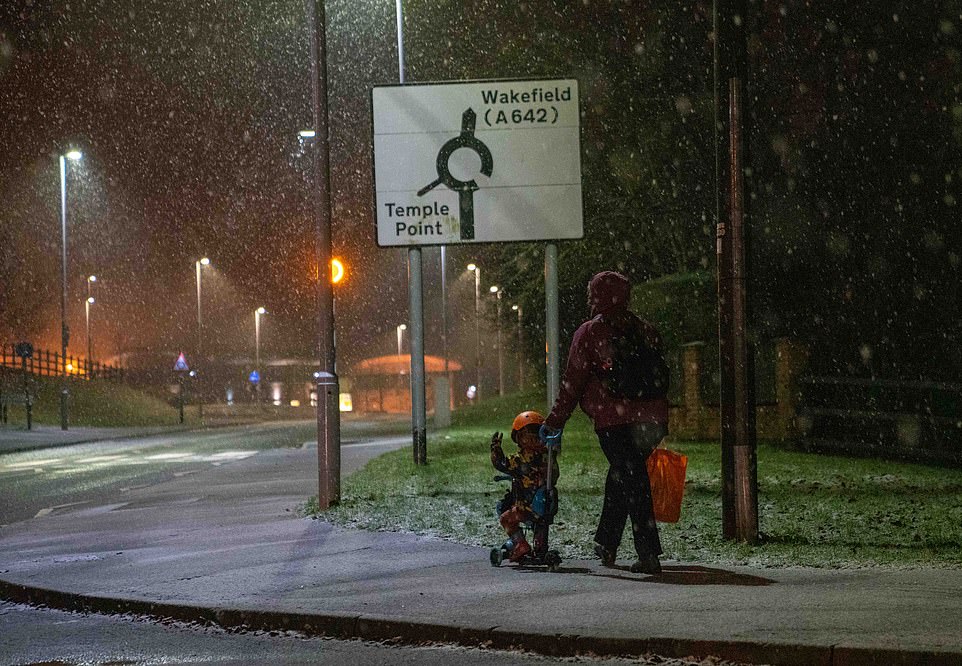 ‘Pedestrians should also be aware that pavements are likely to be affected by ice, so make sure you use the appropriate clothing and footwear if you have to go out for an essential purpose.’

Looking ahead, a further warning has been issued for heavy snow this weekend as far south as Leicestershire and Lincolnshire during a warning on Saturday from 3am until 9pm and some sleet expected in London.

The heaviest snowfall on Saturday is likely in areas at least 650ft (200m) above sea level, where up to 8in (20cm) could fall. At lower levels, up to 2in (5cm) snow could accumulate – while lower-lying places will see rain.

At the weekend, snow is likely across the whole of Northern England, Yorkshire and down through the East Midlands. The Met Office predicts flurries as a band of rain pushing eastwards is due to turn to snow.

Travel disruption, power cuts and disruption to mobile phone coverage are also possible. In its warning for Saturday, which also covers most of Scotland, the Met Office said: ‘A band of heavy snow may lead to disruption. 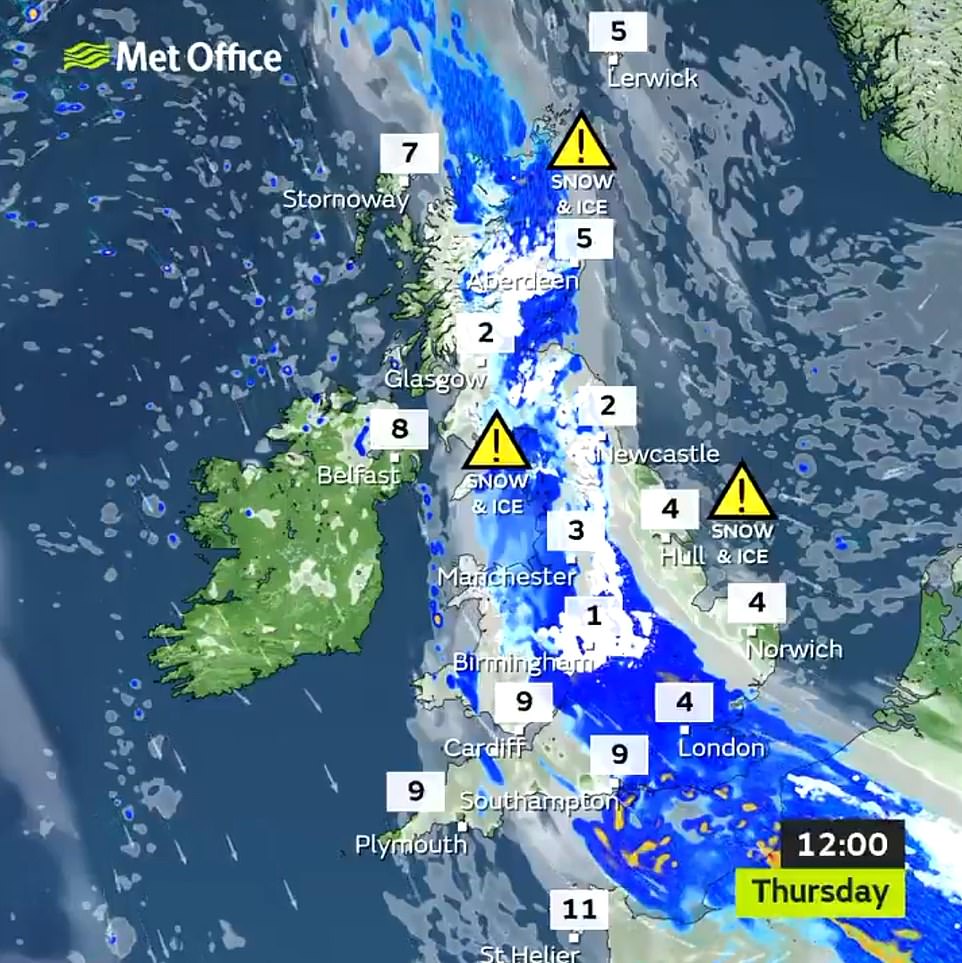 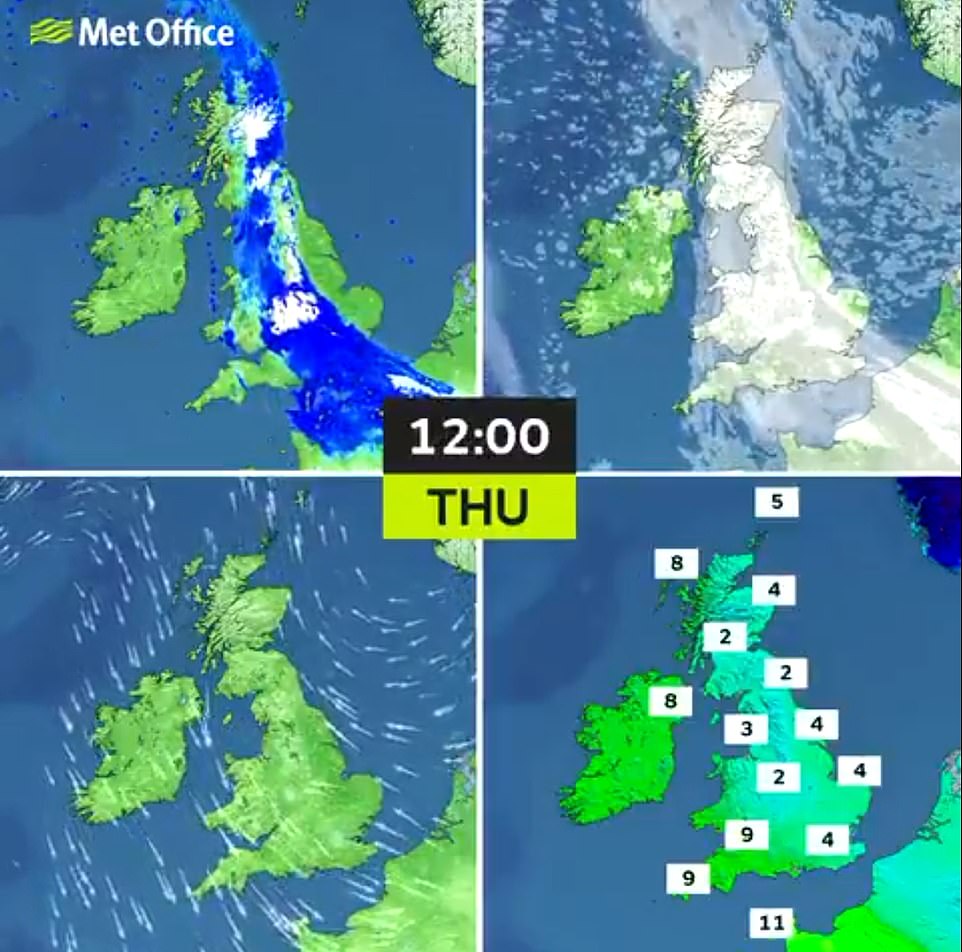 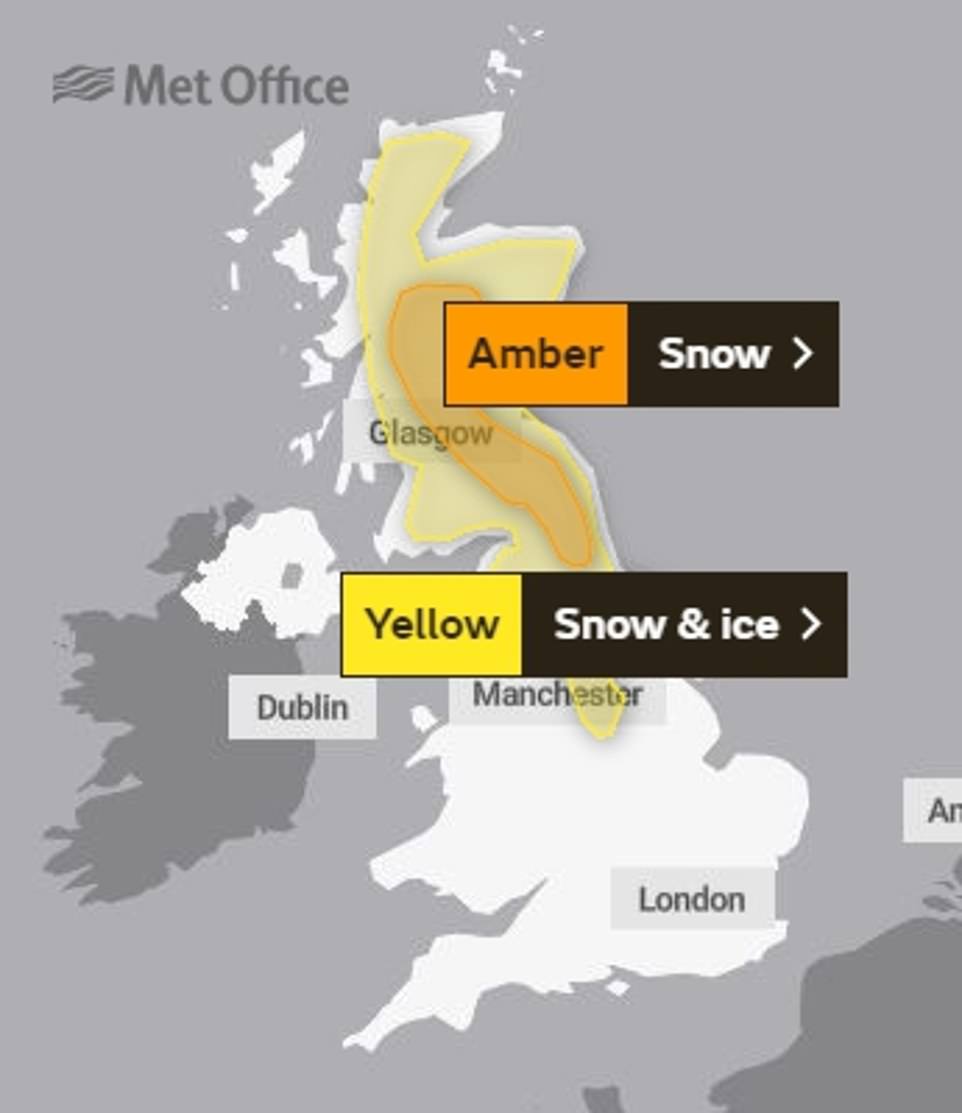 The Met Office also warned people could become injured from slips and falls on icy untreated pavements and footpaths. There will be a brief respite during Sunday, which is set to be mostly fine and dry.

But northerly winds through next week will then bring ‘cold conditions from Scandinavia’, the Met Office said.

Its forecast for next week said: ‘Rainfall is also expected for the north with a risk of organised snowfall especially over high ground. Drier in the south with the potential for frontal bands bringing rain and or snow at times.

‘Temperatures are most likely to be rather cold for much of the UK.’

An unusual meteorological event known as sudden stratospheric warming (SSW) was detected above the North Pole on January 5.

Dr Richard Hall, an expert in SSWs from the University of Bristol, said it ‘loads the dice’ or ‘tips the odds’ in favour of another blast of heavy snow and sub-zero temperatures from Siberia. 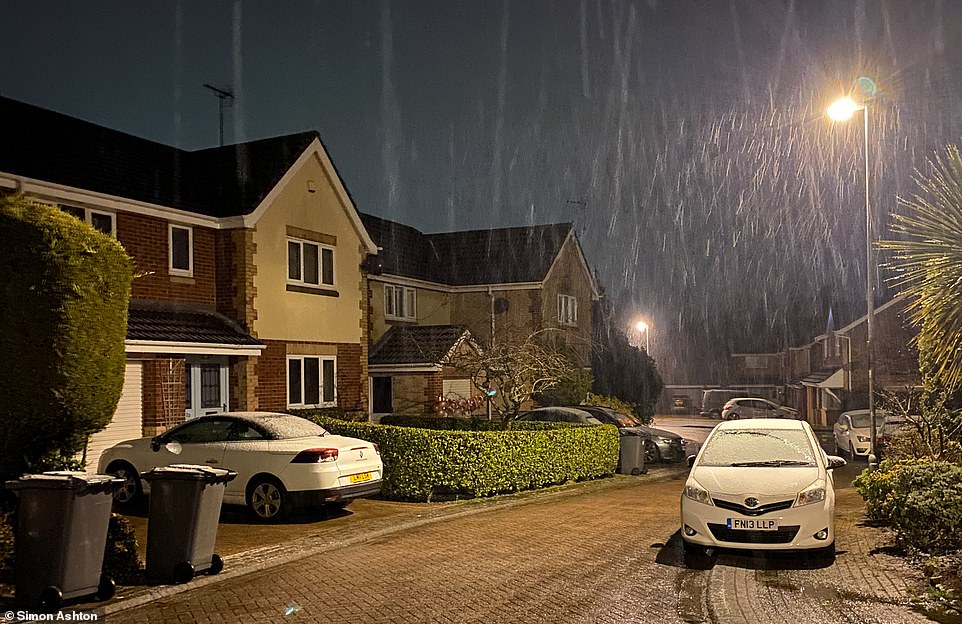 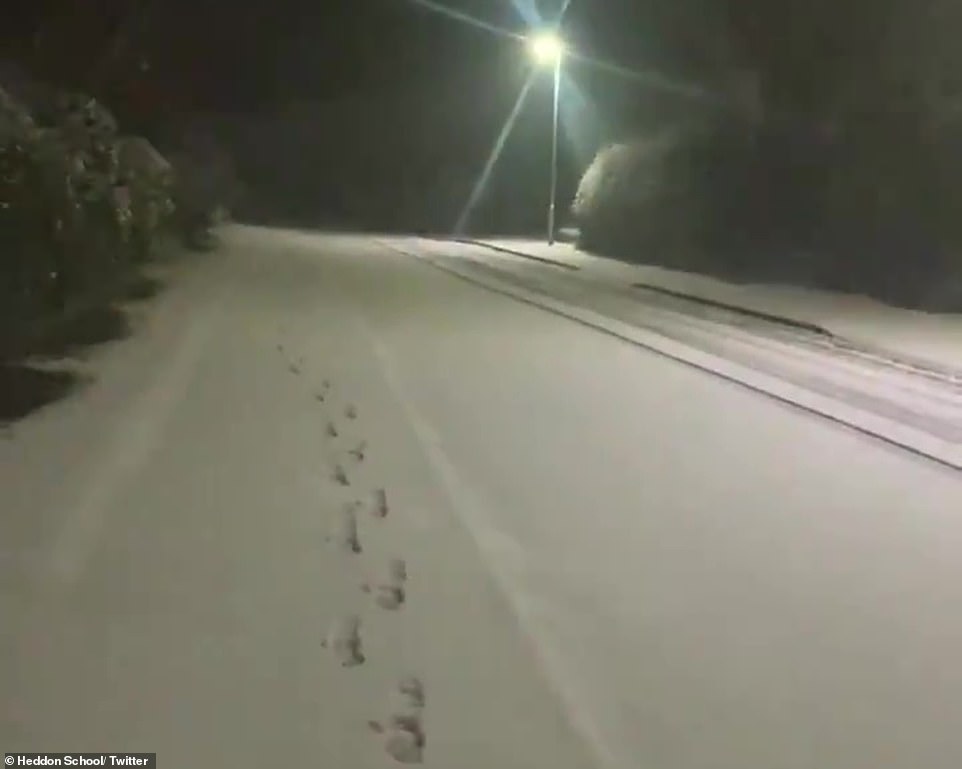 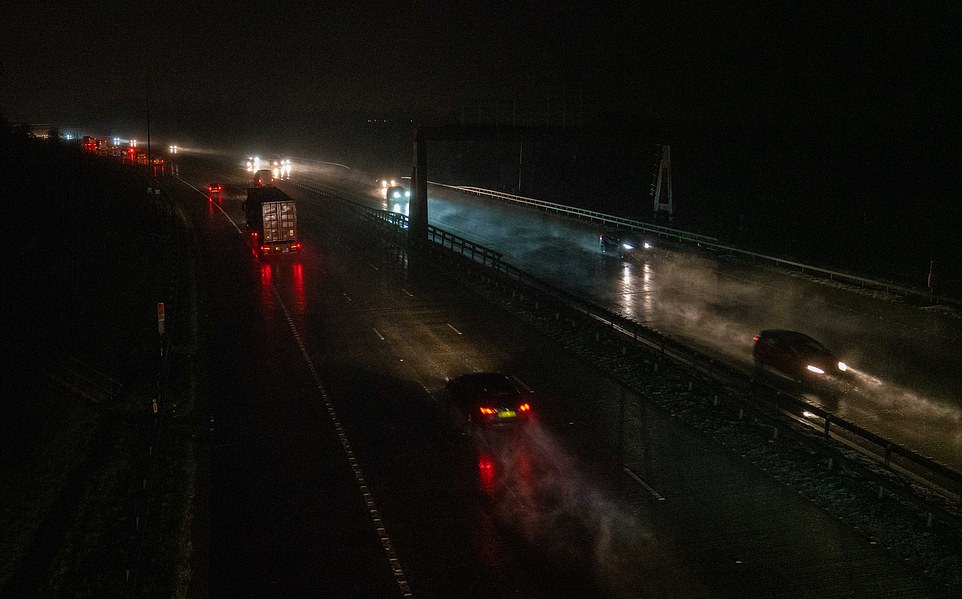 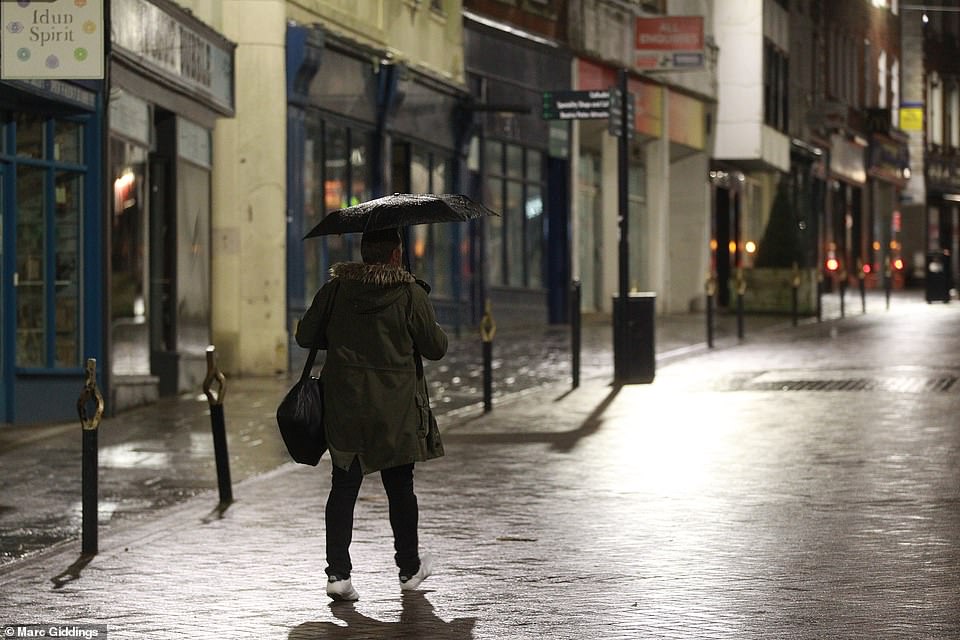 During an SSW the stratosphere – the layer six to 31 miles above the Earth’s surface – can increase in temperature by up to 50C over a matter of days.

This disturbance can travel down through the atmosphere to the Earth’s surface and cause shifts in the jet stream, the fast-moving air currents that cool Europe.

Dr Hall said an SSW happens ‘every two years in three’ and one is ‘taking place at the moment’. In 2018, there was an SSW event two weeks before the ‘Beast from the East’ brought 20in (50cm) snowfalls.

But John Griffiths, a Met Office forecaster, dismissed any link between this week’s weather and the ‘Beast from the East 2’, simply saying the conditions are ‘normal’ for the winter weather cycle.

He said: ‘On Thursday a band of rain, sleet and snow will hit parts of Scotland and northern England, which will slowly extend south to the Midlands as the day progresses.

‘It is expected to be very cold in these areas, dropping below 0C (32F) in Scotland and parts of northern England. This will start to gradually ease and die out during the evening, with frost and freezing fog coming in.’