Single mum, 26, films moment she’s arrested for not wearing a mask despite having an exemption – before cop APOLOGISES and admits he stuffed up after calling his sergeant 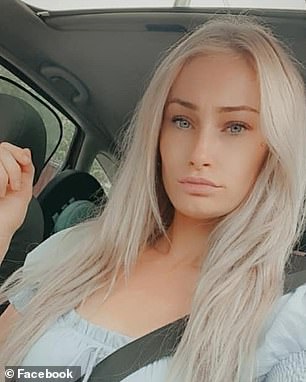 Deejai Barker was walking out of a Sydney shopping centre when she was approached by two officers who asked her why she wasn’t wearing a mask, despite having an exemption

A police officer arrested a distressed single mother for not wearing a mask while shopping – despite having an exemption – before later offering a apology.

Deejai Barker was walking out of a Sydney shopping centre when she was approached by two officers who asked her why she wasn’t complying with Covid measures.

Under health guidelines, shoppers in Greater Sydney are required to wear masks in shopping centres and other public places, unless they have a medical exemption.

Ms Barker filmed her encounter with the two male officers after reaching the carpark.

‘I walked out of the shop and you asked where’s my mask, and I said I had an exemption,’ Ms Barker told the two officers.

‘You said ‘oh ok that’s fine’ and I walked off because I know my rights. And so what did you do? You followed me out of the shop.’

She then panned to the second officer: ‘This one’s just standing here not saying anything.’ 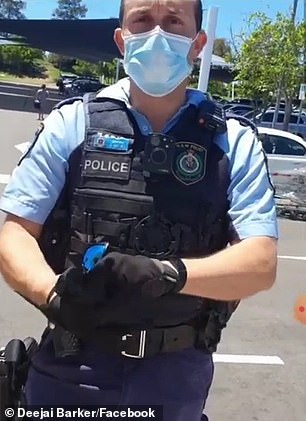 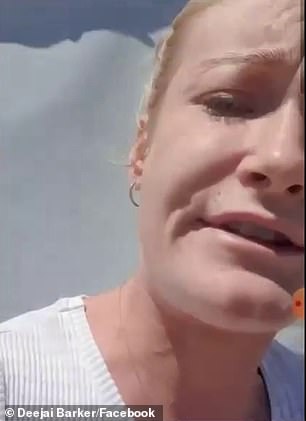 The first police officer told Ms Barker he was placing her under arrest for breaching a public health order.

‘And as part of that, I’m going to search your bag,’ he told her.

The mother-of-two responded: ‘No, you’re not searching my bag.’

He told Ms Barker that refusal to comply with police is an ‘offence on its own’.

The officer then reached towards Ms Barker’s purse and said he was going to look at her ID.

A scuffle ensued as he tried to grab Ms Barker’s handbag, all in front of her two young kids.

‘Give me my purse!’ she screamed. ‘Do not touch my purse.’

The footage then cut out, before showing the police officer speaking on the phone with his sergeant for advice a short time later.

‘I apologise. I’m providing you with my details, you can go to any local police station and make a complaint in writing,’ the officer sheepishly told Ms Barker. 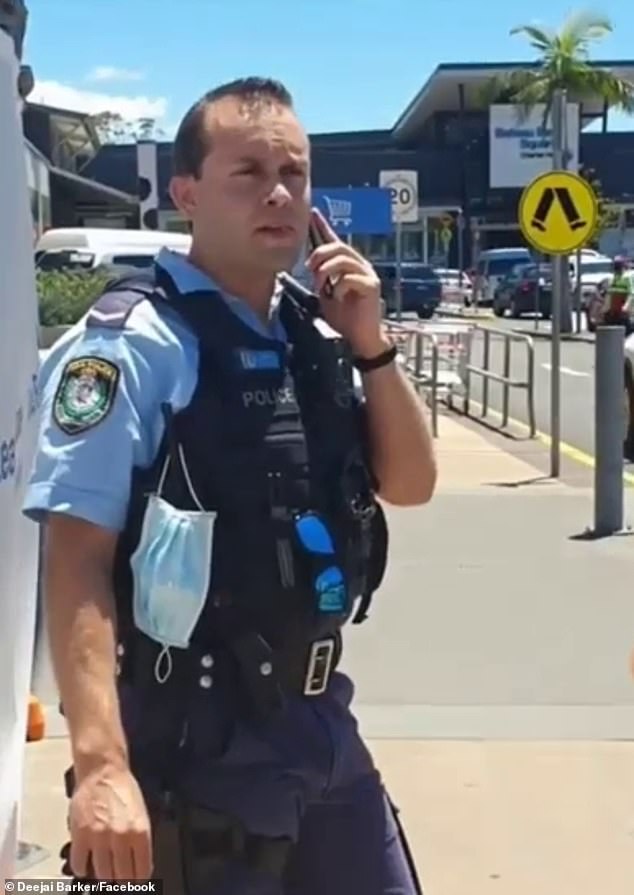 The footage then cut out, before showing the police officer speaking on the phone with his sergeant for advice a short time later

‘What am I correct about?’ the livid mother asked the officer.

‘Not requiring to provide the ID or proof of exemption,’ he responded.

Ms Barker sarcastically thanked the officer, telling him: ‘Your details is not freaking enough for doing what you just did in front of my kids and reaching into my bag and grabbing my wallet.’

The cop then handed her a copy of his name and station.

‘You’re more than welcome and encouraged to go and make a complaint,’ he said.

‘I should have known better and that’s on me. Obviously you’re no longer under arrest.’